Dorado (Spanish pronunciation: [doˈɾaðo], Golden) is a town and municipality in the northern coast of Puerto Rico, 15 miles (24 km) west of San Juan and is located in the northern region of the island, bordering the Atlantic Ocean, north of Toa Alta, east of Vega Alta, and west of Toa Baja. Dorado is spread over five barrios and Dorado Pueblo (the downtown area and the administrative center of the city). The town is regarded as a tourist destination with golf courses, hotels, and beaches. However, many locals would dispute this claim. It is part of the San Juan-Caguas-Guaynabo Metropolitan Statistical Area.

The Dorado Airport was operated from 1942 to 1996. The airport began as a military landing strip, then became a civilian airport in the 1960s with Caribair and Dorado Wings flights operating until 1980 and 1982 respectively. The airport operated as a private landing strip throughout the 1980s and then fell into disrepair. In 1996, the airport was rezoned as residential land and redeveloped.

Dorado has upscale neighborhoods and a small downtown area with a plaza (Spanish town square), as other Puerto Rican municipalities. The town's patron saint is Anthony of Padua, and patron saint celebrations are held at the plaza every year on June 13.

During the early years of the 18th Century, there were already mentions of a "Sitio de Dorado" in some San Juan registers.

Since the beginning of the Spanish colonial period and until 1831, Dorado existed as a barrio (or ward) of the town of Toa Baja. Over several years, the ward grew and established its own town center called the "new pueblo" to differentiate itself from Toa Baja, which became known as the "old pueblo." Over several years, the wards that currently make up Dorado grew and the people of the "new pueblo" wanted to separate themselves from Toa Baja.

On November 22, 1842, Jacinto López Martínez, the Sergeant at Arms for the ward of Dorado, petitioned the Spanish Governor of Puerto Rico, Santiago Méndez Vigo, to establish the municipality of Dorado. The governor authorized the founding of the town pending the construction of public works, including an administrative building and a church near the town square. In 1848, the construction of the public works were completed and López Martínez became the first mayor of Dorado.

In 1902, four years after the Spanish–American War, Dorado was again appended to Toa Baja. However, in 1905 it regained its status as a separate town. 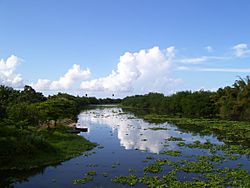 Much of Dorado's geology consists of alluvial and coastal/estuarine sediments of Quaternary age and limestones of Tertiary age. The limestones are mostly in the south part of the municipality, in Espinosa, Maguayo and Rio Lajas Wards. These limestones exhibit mature karst topography of great beauty. It has been subjected to extensive quarrying, which have left unsightly scars in the landscape. Some local communities have gathered efforts to minimize quarrying and improve land management to protect the remaining karst topography and the fauna and flora that lives in it.

Dorado is the site of some bodies of water. Some of them are:

Dorado is divided into eight barrios.

In recent years, Dorado has been known for its development of upscale neighborhoods. Several known politicians and artists (e.g. Ricky Martin, Carlos Romero Barceló) live or own properties in the city.

Dorado has long been known as a golf haven. Its tourist industry includes the Dorado Beach Resort(Ritz-Carlton Reserve & Plantation), the Hyatt Hacienda del Mar, and Embassy Suites in the Dorado Del Mar neighborhood. As of 2014 there are three operating golf courses in the municipality, the Dorado Beach East Course, the Plantation Sugarcane Course and the Plantation Pineapple Course. The Dorado del Mar course closed in 2014.

Some of the places to visit in Dorado are located downtown. For example, the Museum Casa del Rey is the house built in most towns controlled by Spain during their colonization, which was intended for the King and Queen to stay if they visited. The museum includes several artifacts from the era. There's also the Distinguished Doradeños Plaza, and the Juan Boria Theater. The last one was recently reopened after a long period of restoration.

Some of the most visited beaches in Dorado are Sardinera, Kikita and El Unico are other beaches frequented by surfers. The Ojo del Buey Park is a park located at the base level of the La Plata River. The name comes from a rock formation that has the shape of an ox.

Dorado also has a church called the Sanctuary of Christ of the Reconciliation, that has the third largest statue of Jesus Christ in the Caribbean, inside its temple.

Dorado has their very own Double A baseball team called Los Guardianes (The Guardians) and it's still one of the main places in the island to play golf or tennis.

As a whole, Puerto Rico is populated mainly by people from a Creole (born on the Island of European descent) or Spanish and European descent, with small groups of African and Asian people. Statistics taken from the 2000 census shows that 74.1% of Doradeños have Spanish or White origin, 12.2% are black, 0.5% are Amerindian etc.

All content from Kiddle encyclopedia articles (including the article images and facts) can be freely used under Attribution-ShareAlike license, unless stated otherwise. Cite this article:
Dorado, Puerto Rico Facts for Kids. Kiddle Encyclopedia.