Chandler is a city in Maricopa County, Arizona, United States, and is a prominent suburb of the Phoenix, Arizona, Metropolitan Statistical Area (MSA). It is bordered to the north and west by Tempe, to the north by Mesa, to the west by Phoenix, to the south by the Gila River Indian Community, and to the east by Gilbert. As of July 2015, the population was 260,828 according to the United States Census Bureau, According to the city's official website, Chandler's Transportation & Development Department estimated the population, as of May 2016, to be 247,328. It also has satellite locations for many technology companies, including Intel and Orbital ATK.

In 1891, Dr. Alexander John Chandler, the first veterinary surgeon in Arizona Territory, settled on a ranch south of Mesa, studying irrigation engineering. By 1900, he had acquired 18,000 acres (73 km2) of land, and began drawing up plans for a townsite on what was then known as the Chandler Ranch. The townsite office opened on May 17, 1912, the same year that Chandler High School was established. The townsite was bounded by Galveston Street on the north, Frye Road on the south, Hartford Street on the west, & Hamilton Street on the east. By 1913, a town center had become established, featuring the Hotel San Marcos, the first golf resort in the state.

Most of Chandler's economy was successfully sustained during the Great Depression (a second San Marcos hotel was canceled due to the Depression however), but the cotton crash a few years later had a much deeper impact on the city's residents. Later, the founding of Williams Air Force Base in 1941 led to a small surge in population, but Chandler still only held 3,800 people by 1950. By 1980, it had grown to 30,000, and it has since paced the Phoenix metropolitan area's high rate of growth, with vast suburban residential areas swallowing former agricultural plots. Some of this growth was fueled by the establishment of manufacturing plants for communications and computing firms such as Microchip, Motorola and Intel.

Since the early 1990s, the City of Chandler has experienced exponential growth, ranking among the fastest-growing municipalities in the country. Indeed, nearly 100,000 homes dot the landscape today and the population has surged to more than 238,000 residents. The heart of Chandler remains its revitalized historic downtown, which includes the award-winning Chandler City Hall and a Center for the Arts. In 2010, Chandler was named as an All-America City, bestowed by the National Civic League. Chandler was the only Arizona winner for the 61st annual awards. In 2012, the city celebrated its 100th Birthday. Centennial events were planned throughout the year.

Chandler has reached its physical limits save for some remaining county islands and cannot expand outward anymore due to being bound in by the Gila River Indian Community, Tempe, Mesa, Gilbert, and Phoenix. 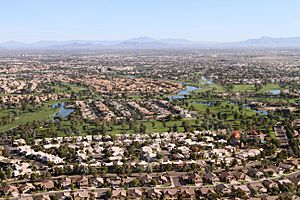 Neighborhoods in the City of Chandler around Ocotillo Road

There were 62,377 households out of which 41.1% had children under the age of 18 living with them, 57.5% were married couples living together, 10.5% had a female householder with no husband present, and 27.2% were non-families. 19.3% of all households were made up of individuals and 3.6% had someone living alone who was 65 years of age or older. The average household size was 2.82 and the average family size was 3.26. 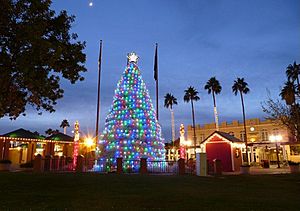 Chandler is noted for its annual Ostrich Festival. Initially, agriculture was the primary business in Chandler, based on cotton, corn, and alfalfa. During the 1910s, there were ostrich farms in the area, catering to the demand for plumes used in women's hats of the era. This demand ebbed with the increasing popularity of the automobile, but the legacy of the ostrich farms would be commemorated by the Ostrich Festival. The Chandler Center for the Arts, a 1,500-seat regional performing arts venue, is located downtown, and the Arizona Railway Museum is at Tumbleweed Park. A 70,000-square-foot (6,500 m2) Holocaust and Tolerance Museum has been slated for construction in Chandler.

There are numerous properties in the town of Chandler which are considered to be historical and have been included either in the National Register of Historic Places or listed as such by the Chandler Historical Society. The Historic McCullough-Price House, a 1938 Pueblo Revival-style home, was donated to the city by the Price-Propstra family in 2001. The city renovated and opened it to the public in 2007. On June 12, 2009, the McCullough-Price House was added to the National Register of Historic Places, the official listing of America's historic and cultural resources worthy of preservation. The city of Chandler operates the facility, which is located southwest of Chandler Fashion Center at 300 S. Chandler Village Dr.

On May 18, 2016, a national nonprofit parks and recreation advocacy organization based in Washington, D.C., announced that Chandler was a 2016 Playful City USA community, marking the tenth consecutive year the city earned the distinction (one of just 12 founding U.S. cities to receive the honor for the tenth consecutive year since the program was initiated in 2007). Chandler was recognized for taking an innovative approach to making play a priority throughout the city with its many recreational amenities, parks and aquatic centers.

Chandler's recreational offerings provide residents and visitors of all ages, interests and abilities with the facilities to participate in many sports, activities and special events. The Department publishes a quarterly recreation magazine called Break Time that is distributed free at many City facilities and through a free subscription service to residents.

Chandler's regional Tumbleweed Park hosts a variety of special events throughout the year, including the annual Ostrich Festival, the Fourth of July Fireworks Festival and the sixth annual Day of Play, attended by more than 5,000 people, was held on Saturday, October 27, 2012 at Tumbleweed Park.

On Sept. 6, 2008, the Environmental Education Center at Veterans Oasis Park, a shared-use site with the Municipal Utilities Division and the Chandler Police Department, won the Valley Forward Association's prestigious Crescordia Environmental Excellence Award in the category of "Site Development and Landscape for Parks." In 2008, Chandler also received the American Crown Community Award for Outstanding Leadership in Local Government for Veterans Oasis Park, located at the northwest corner of Chandler Heights and Lindsay roads. This facility and park were an integral part of Chandler's 2010 All-America City award presentation. The city was one of 10 across the U.S. to receive the All-America City honor on June 18, 2010, in Kansas City, Missouri. Veterans Oasis Park is also the site of the city's highest point, at 1,214 feet (370 m).

On September 25, 2009, the Chandler Parks Division was honored for its efforts to preserve more than 250 native trees by transplanting and using them for multiple park beautification efforts. The Arizona Community Tree Council, Inc., in cooperation with the Arizona State Land Department – Urban & Community Forestry, presented Chandler with its top award in the Municipal Government Agencies category at its annual meeting in September. The Council recognized 18 other individual, civic, and corporate entities for their efforts to enhance and beautify the local environment with trees. The ACTC noted that Chandler was creative and resourceful in transplanting native trees during the construction and grading for the first phase of Mesquite Groves Park and Aquatic Center.

On Sept. 2, 2010, the Chandler Parks Division received the Natural Resources Award from the Arizona Parks & Recreation Association for the development of Paseo Vista Recreation Area on top of a closed landfill at the northwest corner of McQueen and Ocotillo roads. On October 2, 2010, the Paso Vista project also received the prestigious Crescordia Environmental Excellence Award from the Valley Forward Association.

On Oct. 12, 2011, Chandler was named one of the 2011 100 Best Communities for Young People, marking the fifth time that the city received this designation by the America's Promise Alliance and Ing. The award program honors communities across America for their commitment to provide healthy, safe and caring environments for young people. Chandler was recognized for its collaborative efforts between the city, schools, non-profit organizations and community members. Programs such as ICAN, the Mayor's Youth Commission, Chandler CARE Center and the Youth Enhancement Program are just some of the highlights of Chandler's success.

Most incorporated portions of Chandler, along with other East Valley cities Gilbert, Mesa, and Tempe, have their own addressing system distinct from Phoenix and Maricopa County. The north-south meridian is Arizona Avenue, also known as State Route 87. Commonwealth Avenue, two blocks south of Chandler Boulevard, is the east-west baseline. With the significant exception of the stretch of the city from Chandler Boulevard to Ray Road, address numbers follow in mile-long increments of 1000 along the grid. Modern remnants of county addressing from the city's rural agrarian days can be found in some neighborhood street names (90th Place, 132nd Street) and county islands surrounded by the city proper.

Chandler Municipal Airport is a two-runway general aviation facility located in the heart of the city south of Loop 202. Gila River Memorial Airport in the Gila River Indian Community may serve the city in the future. The nearest commercial airport to downtown Chandler is Phoenix-Mesa Gateway Airport located roughly 10 miles (20 km) to the east, which offers service to 35 cities as of July 2015. For international and regional travel, most area residents continue to use Phoenix Sky Harbor International Airport, 20 miles (30 km) from downtown Chandler.

Chandler has very limited bus service compared with other Valley Metro cities of similar size; it currently ranks sixth in total ridership behind Phoenix, Tempe, Mesa, Scottsdale, and Glendale. Most local routes dead end a few miles from the city or have further limited service within its borders. Currently, two express bus routes leave from the city near downtown, and a new park and ride facility was recently completed further south. Faced with increasing congestion, the land-locked city is pursuing transportation alternatives, including enhancement of the local bus system. This goal has partially been achieved through Proposition 400, which converts transit funding from city-based to county-based. The result has been increased frequencies on routes 72, 96 (since July 28, 2008), and 156, as well as Sunday bus service on these three routes. However, other routes have yet to be converted to "supergrid" status.

Chandler is served by two single-track branch lines of the Union Pacific Railroad. One generally traverses the Kyrene Road alignment and currently dead-ends at the Lone Butte Industrial Park. The other runs east of Arizona Avenue and dead-ends near Sacaton, Arizona. Commuter rail service on these lines is under study as of 2007[update].

No light rail lines have been approved in the city, although high-capacity corridors including light rail have been identified in other regional and local plans. City officials joined the regional light rail authority, Valley Metro Rail, in 2007, expecting service perhaps in 2020. Potential high capacity transit corridors that have been identified in the past include Rural Road, Arizona Avenue, and Chandler Boulevard. The Chandler General Plan 2016 does not authorize light rail or any form of high capacity transit. A separate process for any consideration of light rail as the mode of transit may occur in the years to come. The language in the General Plan 2016 is to identify that options remain available in the future for the city as it continues analyzing transit within the high -capacity transit corridors.

All content from Kiddle encyclopedia articles (including the article images and facts) can be freely used under Attribution-ShareAlike license, unless stated otherwise. Cite this article:
Chandler, Arizona Facts for Kids. Kiddle Encyclopedia.