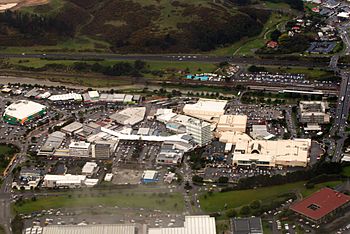 Porirua is a city in the Wellington Region of the North Island of New Zealand, and one of the four cities that constitute the Wellington metropolitan area. It almost completely surrounds Porirua Harbour at the southern end of the Kapiti Coast. Pauatahanui Inlet, the eastern inlet of the harbour, is notable for its world-class estuarine values. The population at the June 2016 was 55,200 .

The name "Porirua" has a Māori origin: it may represent a variant of pari-rua ("two tides"), a reference to the two arms of the Porirua Harbour. In the 19th century the name designated a land-registration district that stretched from Kaiwharawhara (or Kaiwara) on the north-west shore of Wellington Harbour northwards to and around Porirua Harbour. The road climbing the hill from Kaiwharawhara towards Ngaio and Khandallah still bears the name "Old Porirua Road".

In the 19th century a small European settlement grew up, partly because of the need for a ferry across the harbour. At the time a small Māori settlement already existed.

The Wellington and Manawatu Railway Company opened a railway line to Porirua in 1885, linking the city with Wellington. The railway reached Longburn (south of Palmerston North) in 1886 to connect with the Government's lines to Taranaki and Napier. With the acquisition of the company by the government in 1908, the line to Porirua formed part of the North Island Main Trunk railway. The railway contributed much to the growth of Plimmerton and Paremata by making day-trips to the beaches from Wellington relatively easy. The line through to Porirua was electrified in 1940 following the construction of the Tawa Flat deviation.

The 1880s and 1890s saw the establishment of the Porirua Lunatic Asylum on the hill south-west of the village. Following the Mental Defectives Act of 1911, the Asylum became Porirua Mental Hospital.

In the late 1940s state planning envisaged Porirua becoming a satellite city of Wellington with state housing. Since then Porirua has grown to a city population approaching 51,000, with state housing no longer in the majority. Major territorial additions to the city occurred in 1973 and 1988 as part of the reduction and eventual abolition of Hutt County.

Substantial industrial areas, generally west of the city centre, have evolved. During the 1960s Kodak, UEB Industries and many small businesses opened at Elsdon. During the following decade, Ashley Wallpapers developed the former UEB property and after favourable negotiations with the government, Todd Motors (later Mitsubishi) moved from Petone to Porirua.

On 7 June 1976, New Zealand's first McDonald's restaurant opened in Porirua, on the corner of Cobham Court and Hagley Street. The original restaurant closed on 24 April 2009, and the store relocated to Kenepuru Drive.

The City has a Coat of Arms and the Blazon is: Vert two Piles Barry wavy of ten Argent and Azure and for the Crest on a Wreath of the Colours in front of a Lymphad proper Sail set Pennon flying Gules Flags flying Azure a Whale proper. Supporters: on the dexter side a Private Soldier of the 58th Regiment of Foot in the uniform of the early Nineteenth Century and on the sinister side a Maori Warrior both proper.

Translation of the Blazon. The shield is the most important part and is first described. “Vert” means green so that is the base colour of the shield. Then the objects on the shield are described. A “Pile” is V shaped object and there are two of them. “Barry” means the piles are divided into an even number of lines in this case ten. The lines are “wavy” like the sea and are alternatively coloured silver (“Argent”) and blue (“Azure”.) Silver is usually depicted as white.

The Supporters are the men on either side of the shield. The dexter side is the right from the shield carrier’s point of view but to the left for an observer. They are as described in the blazon and are too are depicted in their natural colours.

Neither the mantelling nor the motto are normally part of the blazon. However the motto of "Mo Te Katoa Nga mahi" may be translated as "All That is Done is For the Benefit of All".

Porirua is largely formed around the arms of the Porirua Harbour and the coastline facing out to Cook Strait and the north-eastern parts of the South Island. Most of the populated areas of Porirua are coastal: Camborne, Karehana Bay, Mana, Onepoto, Papakowhai, Paremata, Pauatahanui, Plimmerton, Pukerua Bay, Takapuwahia, Titahi Bay and Whitby all have direct access to coastal parks and recreation reserves. Several suburbs without direct coastal access, including Aotea, Ascot Park and Ranui Heights, have substantial portions with good views over the harbour. Elsdon, formerly known as Prosser Block, lost access to the harbour as a result of reclamation work, especially during the 1960s. Much of the existing city centre, north of Parumoana Street and east of Titahi Bay Road, was built upon this landfill.

State Highway 1 passes north-south through the middle of the city, linking Porirua southwards to Wellington and northwards to the Kapiti Coast and the bulk of the North Island. Porirua is the northern terminus of the Johnsonville-Porirua motorway (opened progressively from 1950), which forms part of State Highway 1. State Highway 58 links Paremata via Whitby and Pauatahanui with Haywards in the Hutt Valley to the east.

The Ara Harakeke is a pathway that runs alongside SH1 and the Taupo Swamp, north of Plimmerton. The first section was opened in 2002. Porirua City Council won a Cycle Friendly Award for this project from the Cycling Advocates' Network in 2003.

The North Island Main Trunk railway line passes through Porirua, mostly close to State Highway 1, with six stations including the main Porirua Railway Station inside the city and one on the Wellington City border. Kapiti Line suburban passenger trains run between Wellington and Waikanae (generally half-hourly except at peak periods), and the Overlander long-distance train between Auckland and Wellington calls southbound but not northbound.

Ferry services ran between Paremata and Picton for short periods but appeared unable to compete with Wellington-based services despite the shorter distance.

The local culture, history and artists are represented at the Pataka Museum of Arts & Cultures located conveniently next to the public library.

The indie rock radio station andHow.FM broadcasts locally at 107.5 FM from the suburb of Papakowhai.

As early as 1883, Porirua began to hold regular horse racing events on the harbour's Southern beach. Towards the end of a meeting, competing riders would also have to combat the incoming tide. The Porirua Jockey Club was quickly established with Mr W. Jillett the first secretary and local butcher, John Rod, the treasurer. Joshua Prosser built stables on his nearby property 'Prosser Block' (now Elsdon) and became a notable trainer of Dominion race-horses. The beach now lies beneath Porirua city centre.

Porirua is also home to the three-time Chatham Cup winning Capital Football team Western Suburbs FC. Well known as a dominant force in New Zealand club football, and for producing many former and current All Whites, they were officially recognised as Porirua City's 2006 Team of the Year for their Chatham Cup Grand Final triumph over Auckland's Eastern Suburbs.

Watersports, fishing and other boating activities are popular in the area, well served by a large marina in Mana and Sea Scouts, yachting, power-boating, rowing, and water-skiing clubs. The harbour entrance from Plimmerton or Mana is popular with experienced windsurfers and kitesurfers while beginners find the shallow enclosed waters of the Pauatahanui arm of the harbour a forgiving environment in which to develop their skills. Aotea Lagoon is a popular recreational area on the south-eastern shore of the Porirua Inlet.

Porirua was the host of the 2010 Oceania Handball Championship. Australia won the tournament from hosts New Zealand. The Cook Islands finished third.

All content from Kiddle encyclopedia articles (including the article images and facts) can be freely used under Attribution-ShareAlike license, unless stated otherwise. Cite this article:
Porirua Facts for Kids. Kiddle Encyclopedia.