Aotea Lagoon is an artificial lagoon surrounded by a 7-hectare (17-acre) public park in the Papakowhai suburb of Porirua, North Island, New Zealand. Aotea and two nearby lagoons were created when major arterial transport links were realigned from the natural coastline to land reclaimed from Porirua Harbour.

The lagoon is 5 hectares (12 acres) of seawater, connected to Porirua Harbour by a culvert under the model windmill. Stormwater drains empty into the lagoon, two in the east bank and a third in the south-east.

The North Island Main Trunk railway and State Highway 1 used to run round three bays between Porirua and Paremata.

In the early 1960s, the railway was realigned to a causeway built between headlands at the mouth of Porirua Stream, Gear Homestead, present-day Thurso Grove and Brora Crescent. Cut off from the sea, the bays became lagoons.

To realign the highway, on the inland side of the railway, the lagoons were partly filled in with material from the Ministry of Works and Development's nearby earthworks.

The Ministry, Porirua City Council, Project Employment Programme and local service clubs turned the area around the middle lagoon into a public aquatic park that opened as Aotea Lagoon in 1980. Originally leased from the Crown, the park was taken over by the City Council in 1994. 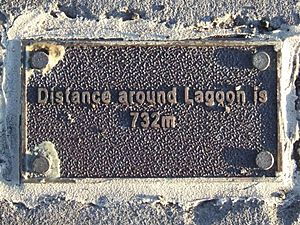 The park's centrepiece is a path around the lagoon.

The Waitangirua Lions built a ¼ scale ridable miniature railway with an 833-metre (2,733 ft) loop track including two bridges and a tunnel. The train runs Sunday afternoon, weather permitting, from Pipitea Station south-west of the lagoon.

The park has lawns on three sides, some with barbecues. Other facilities from the north to south-east are adventure and toddlers' playgrounds, duck pond crossed by boardwalk, splash pad, island reached by bridge, Pétanque terrain and a rose garden.

Most people visit Aotea Lagoon for exercise or relaxation while children enjoy the playgrounds, feeding the ducks, riding bicycles and the train.

All content from Kiddle encyclopedia articles (including the article images and facts) can be freely used under Attribution-ShareAlike license, unless stated otherwise. Cite this article:
Aotea Lagoon Facts for Kids. Kiddle Encyclopedia.