Ngaio is an inner suburb of Wellington, the capital city of New Zealand. It is situated on the slopes of Mount Kaukau, 3500 metres north of the city's CBD. It was settled in the 1840s and many of its streets are named after early settler families. Ngaio was originally a logging community known first as Upper Kaiwarra, then as Crofton until 1908. The area was administratively part of a separate local authority called the Onslow Borough Council which amalgamated into Wellington City in 1919.

Ngaio takes its name from a New Zealand native tree, the Ngaio.

Ngaio has had a number of notable inhabitants including James K Baxter and his family from the late 1950s until the 1980s.

Wellington City Libraries operates Cummings Park Library which is situated at the south entrance of Cummings Park on Ottawa Road. Opened in 1989, and refurbished in 2008, the library’s entrance is paved with 850 tiles made by local potters Paul Winspear and Paul Wotherspoon and decorated by children from Ngaio and Chartwell Schools.

The library’s Maori name is Korimako, named after the Korimako stream that runs through Ngaio.

The Ngaio town hall offers a venue for community services, sports, performances, cultural and private events. The hall contains a stage, kitchen, drop in center and the Ngaio toy library. The hall has a capacity of 300 people and has an accessible entry ramp at the front. The hall was opened in 1924 and was renovated in 1989.

Groups that regularly use the hall include:

Trelissick park runs from the bottom of the Ngaio gorge road and runs across the borders of nearby Wadestown and Crofton Downs. The area acts as an ecological corridor between the Harbour and the northern suburbs. The park has historic gunpowder magazines built in the 1870s. While the park contains areas of original forest remnant, it is also under on-going restoration work led by the Trelissick Park Group that was set up in 1991. Since then, over 80,000 trees have been planted in the area, along with weed management, trapping and bridge building.

Orleans Makererua reserve runs from Makererua street to Orleans street and has remnants of the native bush that was originally throughout Ngaio.

Cummings park is off Ottawa road and has a children's playground and dog exercise area.

The suburb is served by the Johnsonville Branch commuter railway which connects it to the central city. There are two railway stations in Ngaio; Ngaio Railway Station and Awarua Street Railway Station.

The area that modern day Ngaio occupies was originally called 'Tarikaka' by Maori, which means 'nest of the kaka', named after the noisy parrot that lived in the area. The area wasn't occupied by Maori, but there were many Maori tracks running through the area, including a track to the ancient Ohariu Pā on Makara beach, which is today's Awarua Street.

The area was named Upper Kaiwharawhara or Upper Kaiwarra in the 1840s by Captain Edward Daniell who purchased 2,500 acres from the NZ company after selling his commission. In 1845, Daniell built a house in the area near the current Terlissick Crescent and called it "Trelissick" after his old family property in England. Daniell built the 'Bridle Trail' (currently called Old Porirua Road) from his property down through current Kaiwharawhara to the harbor. An agreement was made between Daniell and four sawyers in 1842 to allow them to build the Kaiwara saw mill on his property. The mill was built close to the present day junction of Crofton Road and Kenya Street. A recent subdivision built off Old Porirua road honored Daniell by naming the road leading to it 'Captain Edward Daniell Drive'.

The mill was described by Edward Jerningham Wakefield in his book, "Adventure in New Zealand from 1839 to 1844: With Some Account of the Beginning of the British Colonization of the Islands": 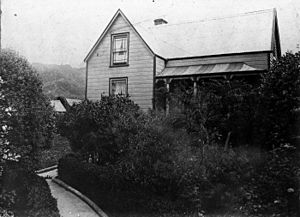 "In the bottom of a thickly wooded valley, only accessible over a steep ridge, a natural fall in the narrow rocky gully of the stream afforded great facilities for erecting a dam. A platform and rough shed extended from side to side of the gully over the dam-head; the wheel and machinery were working underneath; and two or three circular saws were kept in constant employment. The open sides of the workshop displayed this curious work of art in the midst of nature's wildest scenery... The stern craggy sides of the gully might be imagined to frown upon so strange a neighbor as the fretting wheel. Two or three log-huts under the forest sent up their curl of smoke; while the neat housewives, with their flaxen-haired children, stood at the doors to receive with joyful pride the praises bestowed by visitors on the untiring industry of their husbands."

The mill was taken over by John Chew in 1863, who built a cottage made of local totara, rimu and kauri. Chew Cottage still stands today at 19 Ottawa Road which is the now the main road in Ngaio after starting life as the track for John Chew's timber.

In 1863, a school for boys, called Crofton College, was built and boys were taught by Mr W.L. Martin. The college was later sold to Wilson Littlejohn, who would eventually become mayor of Onslow Borough Council. Crofton College is still occupied at 21 Kenya Street.

The Kaiwara Road (also known as the Ngaio Gorge Road and Kaiwharawhara Road) was built in 1850 to allow for bullock trains to transport wool and wood. In the mid 1870s, the Hutt City Council constructed a toll gate at the harbor end of road, which was the only road in or out of the area. Funds collected from the gate - one shilling for vehicles and half for saddled horses, were supposed to be used to repair the road, however residents believed the toll was being used to pay for roads further north, such as the Rimutaka road, due to the poor condition of Kaiwara road.

The toll dispute started when a group of firemen were forced to pay the toll when returning from a fire. A petition was signed by 150 people, and a number of people ended up in court after refusing to pay the toll. The toll gate was destroyed twice by angry mobs until 1890 when the residents broke away from the Hutt City Council to form Onslow Borough Council, made up of Kaiwarra, Khandallah, Wadestown and Ngaio.

Ngaio was part of the new Onslow Borough from 1890 until 1919, when the borough was amalgamated with Wellington City following a referendum on the 31 March 1919. The Borough was named after Lord William Hillier Onslow, who was Governor of New Zealand of the time. This was to placate his family who were appalled with the city's sanitation after his young son Cranley caught typhoid shortly after moving to Wellington. The Borough included the townships of Kaiwarra, Khandallah, Crofton, and Wadestown. In 1896, the Borough had an estimated area of 2,870 acres, a population of 1,530 and 276 dwellings.

Due to a suburb in Marton already being called 'Crofton', the suburb's name was changed to 'Ngaio' in August 1908. It is possible that Ngaio was chosen as the Ngaio tree was the symbol used by the local Kilmister family for their wool bales.

Ngaio school was first opened in 1908 above the Ngaio railway station. It was subsequently moved to Heke Street in 1911 and finally its present site in 1928.

All content from Kiddle encyclopedia articles (including the article images and facts) can be freely used under Attribution-ShareAlike license, unless stated otherwise. Cite this article:
Ngaio, New Zealand Facts for Kids. Kiddle Encyclopedia.