The Johnsonville Branch known as the Johnsonville Line, is a commuter branch line railway from the main Railway Station of Wellington, New Zealand to the northern suburb of Johnsonville via Ngaio and Khandallah.

Transdev Wellington operates the trains under contract from the Greater Wellington Regional Council. In 2001, an estimated 1,043 passengers used the line on a working day.

The line has seven tunnels and eight stations. Four stations (Crofton Downs, Awarua Street, Box Hill, and Raroa) are on a curve. Before arrival at the Crofton Downs and Awarua Street stations, the onboard announcement adds Please mind the gap when exiting the train. There are three crossing loops: at Ngaio and Khandallah stations and below Wadestown in the Ngaio Gorge.

The line was built in the 1880s as part of the private Wellington and Manawatu Railway Company line to connect Wellington to Longburn. Construction started in 1879, and the first section, to Paremata, opened on 24 September 1885. The line became part of the North Island Main Trunk when the government bought the WMR in December 1908.

The line was used by railway workers from the Tarikaka Settlement in Ngaio, including early shift workers who needed to fire up steam locomotives at the Wellington depot.

Two experimental RM class railcars were briefly used on the line as NZR sought to develop economically viable railcar technology. The Westinghouse railcar was introduced in 1914 and served through to 1917. The Thomas Transmission railcar was introduced in 1916 and operated sporadically into the early 1920s. Both railcars struggled on the steep grades and revealed that further advances were needed to make railcars suitable to New Zealand's conditions. Trains going north often used banking engines on the steep grade from Lambton to Ngaio and sometimes when going south from Johnsonville to Raroa.

The line became a branch when the Tawa Flat deviation of the NIMT opened to passengers in 1937, and was sometimes called The Hill (in NZR jargon). The line was electrified at 1500 V DC overhead supply, and the new service with the new English Electric DM/D class electric multiple units service started from Monday 4 July 1938, after an opening ceremony on 2 July. The units normally operated as two-car motor/trailer sets, or four-car sets in peak hours. Additional DM/D class units were ordered for the line in 1942 and supplied in 1946.

The line was terminated in Johnsonville, about 100 m beyond the end of the current line: the State Highway 1 motorway on-ramp follows the route of the old line. Ngaio and Khandallah stations already had crossing loops, and new stations at Awarua Street and Simla Crescent plus a third crossing loop (without passenger platforms) at Wadestown between No. 3 and No. 4 tunnels were added. The two new stations had been used by steam trains from 10 January 1938, although only some local trains stopped there (on request). Even with two additional stops the time to Johnsonville was now 19 minutes either way; previously with steam operation trains took 25 minutes up and 21 minutes down.

The line was reviewed in 1984, 1993 and 2006–07 to consider either closing or upgrading it, without any significant changes being made.

The line has been passenger-only since the termination of livestock trains for an abattoir in the Ngauranga Gorge. The livestock were originally driven on foot through Johnsonville streets from a stockyard adjacent to the station, but after protests sidings near Raroa were opened on 2 February 1958. The livestock traffic ceased about 1973, though the sidings at Raroa were not lifted until about 1982. Because of the sharp curves on the line, EW class electric locomotives were used for livestock trains instead of the earlier ED class locomotives, which were hard on the track with their long rigid wheelbase.

The line is single track through very steep terrain rising 150 m above sea level in its 10 km length, with the highest point (152 m) at the north end of Kaka Tunnel. The ruling grade is 1 in 36, with long sections from Wellington to Crofton Downs and Khandallah of 1 in 40. There are seven narrow tunnels, six bridges, and three passing loops There are three level crossings with half-barriers; at the Simla Crescent and Khandallah stations, and at Fraser Avenue between Khandallah and Raroa stations (the Fraser Avenue crossing was last to get barriers as well as bells, in 2009). There is a private rail crossing to a house immediately south of the Fraser Avenue crossing; and a pedestrian crossing from Burma Road to Poona Street, Khandallah between the Khandallah station and the Rangoon Street road overbridge. Pedestrians can also cross the line at the Ngaio station.

The signals were operated by the trains, a standard SLA Absolute Block System; the first train at a crossing station or siding (Wadestown, Ngaio and Khandallah) claimed the next block (if two arranged simultaneously the up train got priority as there was a 5 second delay for the down train). The system was revised in July 1969; the second platform siding at Johnsonville was removed and the goods yard (since removed) became a switch-locked siding. Signal boxes were initially retained at Ngaio and Khandallah. Up to 1984 when the line was truncated and the station was moved to accommodate the mall, the station had two sidings either side of the station platform and the preferred platform was alternated every 12 hours to equalise usage.

The Wellington City Council let a $1.7m tender to replace the Rangoon Street single-lane overbridge of c1906, which crosses the Johnsonville line, with a two-lane bridge. Work commenced in June 2008 and was completed by December 2008.

Three traction substations along the line take electricity from Wellington Electricity's 11,000-volt distribution network and transform and rectify it to 1500-volt direct current for the overhead traction lines. The substations are located at Wellington (shared with the Kapiti and Hutt Valley Lines), Ngaio and Khandallah.

The names of the tunnels and their length in feet and metres are:

The North Wellington Public Transport Study by GWRC and WCC considered four options for improved public transport: enhanced rail; bus on street; conversion to a guided busway; and conversion to light rail. On 16 November 2006 the GWRC Public Transport Committee and the WCC Strategy & Policy Committee accepted a "Do Minimum" option involving retention of the line and replacement of the current DM units with the same number of refurbished EM/ET class (Ganz Mavag) units; this required enlarging the tunnels and increasing platform clearances and lengths. GWRC now only use Matangi units on this line after the decision to withdraw all Ganz Mavag units in the region from service in favour of a larger order of Matangi units.

GWRC envisaged (2007) that the track through the tunnels would need to be lowered by 120 mm, depending on the new units. Lengthening of passing loops and platforms was also likely to be needed, and the estimated cost was $5 million. A programme of preparatory work for the tunnel upgrading commenced on 7 September 2008 and was completed in February 2009. Construction took place after 20:00 on Sunday – Thursday nights to minimise disruption to commuters, with services being replaced by buses. The seven tunnels were upgraded in January 2009

during a period in which the line was closed to all traffic. The work included: 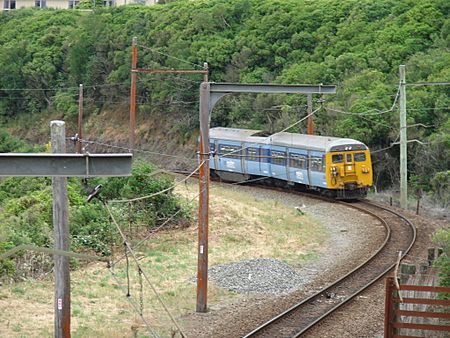 Due to significant mechanical difficulties being experienced by Tranz Metro in keeping the DM/D EMUs in service, several units were withdrawn from service in February 2012. Buses were added to supplement the remaining service capacity pending the planned introduction of the FT/FP "Matangi" EMUs on 19 March 2012. The first Matangi service was the 11:02 departure from Wellington, which passed the last English Electric service on the line at Ngaio station.

The Broderick Road overbridge immediately south of the Johnsonville Railway Station was upgraded by widening and lengthening in 2015 to include cycle lanes and extra road lanes over it.

Provision is made for dual tracks underneath (formerly one track) into the station, as requested by the Greater Wellington Regional Council for future double-tracking.

Proposed infrastructure upgrades for the line include overhead line and mast replacement, sleeper replacement in tunnels and stabilisation of high risk slopes; to be completed in 2022.

All content from Kiddle encyclopedia articles (including the article images and facts) can be freely used under Attribution-ShareAlike license, unless stated otherwise. Cite this article:
Johnsonville Branch Facts for Kids. Kiddle Encyclopedia.