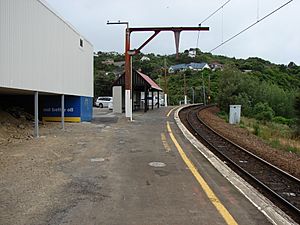 From the station platform, looking in the direction of the station car park and north to Johnsonville

Crofton Downs railway station is one of eight stations on the Johnsonville Branch, a commuter branch railway north of Wellington in New Zealand’s North Island. It serves the suburb of Crofton Downs. Its name is similar to the pre-1908 name for the different Ngaio station, Crofton.

Electric multiple unit trains are operated by Transdev under the Metlink brand through this station in both directions to Johnsonville (to the north) and Wellington (to the south). The station is one of four stations on the line located on a curve; before arrival at the Crofton Downs or Awarua Street stations, the onboard announcement adds Please mind the gap when exiting the train.

Crofton Downs is the most recent station on the Johnsonville Branch, having been opened in 1963 to serve the then new suburb of Crofton Downs. Patronage of the station was light in its early years, not becoming popular until housing in the area was well developed. 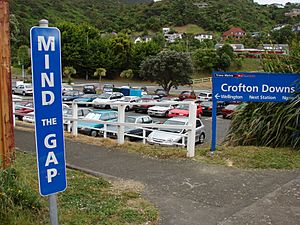 The 22 bus route connects the station to Johnsonville and Wellington.

This station has a single side platform, passenger shelter, and commuter car park. Behind the station is a Mitre-10 hardware store and customer car park.

In 2019/20 the GWRC planned to "renew" the Crofton Downs railway station.[needs update]

All content from Kiddle encyclopedia articles (including the article images and facts) can be freely used under Attribution-ShareAlike license, unless stated otherwise. Cite this article:
Crofton Downs railway station Facts for Kids. Kiddle Encyclopedia.