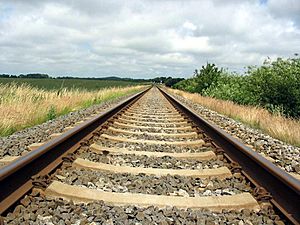 A single track railway is one where traffic in both directions shares the same track. In the early days of railways, especially before the telegraph, operation of significant numbers of trains on a single track railway was fraught with difficulties, including delays and accidents, particularly head-on collisions.

All content from Kiddle encyclopedia articles (including the article images and facts) can be freely used under Attribution-ShareAlike license, unless stated otherwise. Cite this article:
Single track (rail) Facts for Kids. Kiddle Encyclopedia.