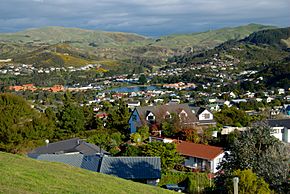 Southern Whitby, with the lower lake at centre

Whitby, a large suburb of Porirua City, New Zealand, located along much of the southern shore of the Pauatahanui Inlet of Porirua Harbour was comprehensively planned in the 1960s (when still in Hutt County) and it has been continuously developed since, with current landscaping and expansion in the hills behind the eastern part of Whitby to facilitate the future growth of the suburb.

The name of the suburb itself, as well as the nautical theme of neighbourhood and street names, are drawn from the life and career of the Pacific explorer James Cook. The bicentennial of his first (1769) visit to New Zealand occurred when development of Whitby started.

The suburb is commercially centered on the Whitby Shopping Centre, containing almost all the retail businesses in Whitby.

In 1967 some 3,180 acres (1,290 ha) of farmland was purchased by a consortium for a new residential development, to be similar to North American new towns; with a population growing to 16,000 in four "neighbourhoods", each focussed on a primary school. Following a town planning appeal hearing in 1974 this became two "neighbourhoods", Adventure and Endeavour.

The first sections in the 01 subdivision were sold by auction in 1970. By May 1971 eight homes were occupied (5 Spinnaker Drive was first); and by 1972, 203 sections had been sold and 62 of the 117 houses built were occupied. By 1998 some 2000 houses had been built. The consortium developed a village centre and a golf course, and operated a commuter bus service from 1 February 1973. The New Zealand Institution of Engineers gave the development their 1978 Environmental Award for an engineering work exemplifying care for and consideration of environmental values.

The original area was part of the Horokiri riding of Hutt County, and some of the later land was in Porirua City. In 1988 the Local Government Commission decided that all of Whitby should come under the Porirua City Council. The Community Developments Consortium (originally Huapai Properties) had partners Fletcher Mainline, Jubilee Investments (part of the Todd Group) and the National Mutual Life Association.

Runs between The Crows Nest (Whitby) and Porirua Railway Station (Porirua), stopping at following stops (among others); Only operates Monday to Friday.

Runs Between Navigation Drive (Whitby) and Porirua Railway Station (Porirua), stopping at following stops (among others);

All content from Kiddle encyclopedia articles (including the article images and facts) can be freely used under Attribution-ShareAlike license, unless stated otherwise. Cite this article:
Whitby, New Zealand Facts for Kids. Kiddle Encyclopedia.