Province of Teramo facts for kids 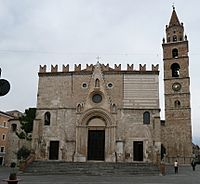 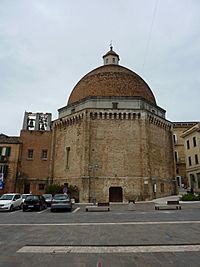 The landscape of the Province of Teramo is dominated almost entirely on the east by a large body of water with the beaches of the Adriatic sea and by the Apennine Mountains which his highest peak of Gran Sasso d'Italia westside. The province is indeed divided latitudinally by the characteristic hills and valleys rich in vineyards and olive groves that begin in the Apennines and run almost to the coast. Colline Teramane (Teramo Hills) has become a trademark and are one of the most significant areas where extra virgin olive oil and Abruzzo wines are produced. Unique of the province of Teramo is the short distance between the beaches of the Adriatic sea and the 3,000-metre (9,800 ft) snowcapped Gran Sasso peaks. They can be reached within an hour from one point to the other. The peaks of the Gran Sasso rise to the west of the Province of Teramo while those of the Monti della Laga dominate its northern border. These two ridges are among the most distinctive and the most relevant of the entire Apennine Mountain range. The majestic Gran Sasso rises at its peak, the Corno Grande, to an elevation of 2,912 metres (9,554 ft) and is characterized by steep, and in places virtually inaccessible, gorges with nature reserves and protected living species. A good part of Gran Sasso and Monti della Laga National Park is nestled in the province. Calderone, the southernmost glacier in Continental European, is found nearby. In contrast to the rugged and isolated Gran Sasso area, the Monti della Laga are characterised by thick forests, shallow gorges, rolling slopes and valleys, and several spectacular waterfalls. In addition to the provincial capital, the most populous and important commercial centers include Roseto degli Abruzzi and Giulianova with populations of 25,000 and 24,000 inhabitants respectively. On the eastern portion of the province are the so-called "seven sister" beaches directly adjacent to the Adriatic Sea. These resorts are noted for one the highest blue flag beaches density, very fine white sand and their mild and wholesome Mediterranean climates which support a rich flora of palm, pine and oleander trees. Much of the province is hilly and very few large flat plains are to be found. Running from the west to the east are a number of valley streams and rivers which eventually empty into the Adriatic Sea. The province of Teramo can easily be reached by car or bus from Rome via the A24 highway and it is also connected to the A14 highway.

Towns in the Province of Teramo include Civitella del Tronto and Atri. The first stood as the northernmost protective point of the Kingdom of the Two Sicilies. In Atri there is a Roman Catholic cathedral and a theatre. The provincial capital of Teramo hosts a large cathedral and has for centuries served all of Abruzzo as a main administrative and economic center.

On 15 September 2005 the President of Italy, Carlo Azeglio Ciampi, went to Teramo to make a special presentation in honour of the resistance movement that arose in this town against the Nazi forces during the Second World War. A special note was made of the young Italian partisans who gathered in the village of Bosco Martese. There they risked deportation, severe reprisals, and other barbarous acts.

The town and fortress of Civitella del Tronto.

From north to south, the province of Teramo boasts several blue flag beaches on the Adriatric Seacoast, called the seven sisters, are the following:

The central railroad station of the province is located in Giulianova. From here is it possible to follow the coastline to the north and south or to travel in a westerly direction towards the provincial capital.

The port of Giulianova is the maritime terminal of the Province of Teramo.

All content from Kiddle encyclopedia articles (including the article images and facts) can be freely used under Attribution-ShareAlike license, unless stated otherwise. Cite this article:
Province of Teramo Facts for Kids. Kiddle Encyclopedia.