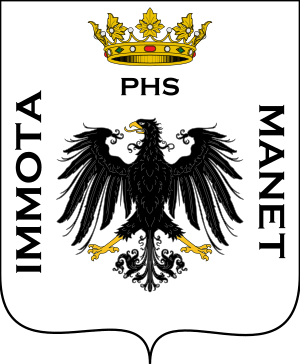 Coat of arms of L'Aquila 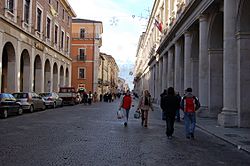 L'Aquila is an Italian city. It has about 71,989 inhabitants. It is the capital of Abruzzo.

It is on a hill in the valley of the Aterno river. It is circled by the Apennine Mountains. The Financial Times, an important newspaper, wrote that L'Aquila is "the most handsome city of Abruzzo".

It is a very old town, full of beautiful buildings and churches. It has a University. 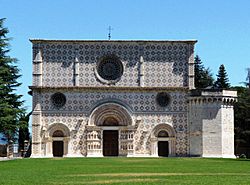 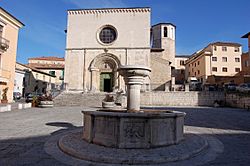 Emperor Frederick II founded this town. He told the people of 99 villages to move in the new town. Frederick's son, Conrad IV of Germany finished the town in 1254. When Conrad died, his brother Manfred destroyed the town in 1259. Charles I of Anjou, king of Sicily, built it again soon.

It became soon the second city of the kingdom of Naples.

The city of L'Aquila had much power because the 99 original villages helped it. Each village owned a borough (a small part of the town) and the borough was a part of the mother-village. That is also why the number 99 is so important in the history of L'Aquila.

The people also built a very peculiar monument, the Fountain of the 99 Spouts (Fontana delle 99 Cannelle).

The city was an important market for the countryside. The saffron (a very important spice) was grown in fields around town; shepherds had millions of sheep near L'Aquila.

After a few years L'Aquila became an important point of communication between cities in and out of the kingdom.

On August 29, 1294, the hermit Pietro del Morrone became pope Celestine V. The ceremony was in the church of Santa Maria di Collemaggio.

To thank the town, Celestine V decided that every year on that day every Christian who went to L'Aquila would be pardoned for his sins (bad actions). This is called Perdonanza, and it still happens every year on August 28 and 29. The Perdonanza is similar to the Jubilee Year, but arrived earlier.

The Perdonanza made the town more rich. But after a long time the plague (a dangerous illness) struck L'Aquila in 1348 and 1363. An earthquake struck it in 1349.

Saint Bernardino of Siena visited L'Aquila two times. The first time he came to preach to King René of Naples. In 1444 he died in the city.

In the 16th century, the Spanish viceroy Philibert van Oranje destroyed L'Aquila again. After this, he built a Castle.

Another earthquake damaged again the city in 1703. 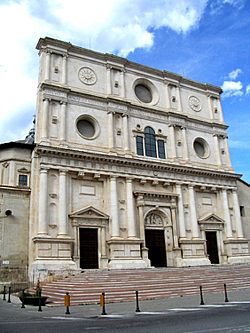 The façade of the San Bernardino basilica.

The city is the home of L'Aquila Rugby. This team won the Italian championship five times.

L'Aquila is twinned with these cities:

All content from Kiddle encyclopedia articles (including the article images and facts) can be freely used under Attribution-ShareAlike license, unless stated otherwise. Cite this article:
L'Aquila Facts for Kids. Kiddle Encyclopedia.