Province of L'Aquila facts for kids

The Province of L'Aquila (Italian: Provincia dell'Aquila) is the largest, most mountainous and least densely populated province of the Abruzzo region of Southern Italy. It comprises about half the landmass of Abruzzo and occupies the western part of the region. It has borders with the provinces of Teramo to the north, Pescara and Chieti to the east, Isernia (in Molise region) to the south and Frosinone, Rome and Rieti (in Lazio region) to the west. Its capital is the city of L'Aquila.

The province of L'Aquila includes the highest mountains of the Apennines (Gran Sasso, Maiella and Velino-Sirente), their highest peak, Corno Grande, the high plain of Campo Imperatore, and Europe's southernmost glacier, the Calderone. The province's major rivers are the Aterno-Pescara, Sangro, Liri, Salto, and the Turano; its major lakes are Lago Scanno and Lago Barrea. It once included the largest lake on the Italian peninsula, Lago Fucino, which was drained in one of the 19th century's largest engineering projects. The lake basin is today a flourishing agricultural area and an important technological district.

The province is known for its many castles, fortresses and pristine medieval hill towns. The province's two major cities, L'Aquila and Avezzano, have had rapid economic expansion since the late 20th century, with the growth of transportation manufacturing, telecommunications, and computer industries.

Throughout most of the 20th century, there were serious population declines in the rural areas, with the near collapse of the province's pastoral agricultural economy, as people moved to cities for work. Since the founding of the Gran Sasso e Monti della Laga and Majella national parks, and the Sirente-Velino Regional Park, tourists have been attracted to the mountainous landscapes. Tourism and associated services have boosted the economy of rural L'Aquila and begun to reverse its population decline. 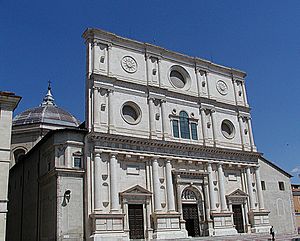 In the highest part of the town is the massive Spanish Fort (Forte Spagnolo), erected by the Spanish viceroy Don Pedro de Toledo in 1534. It is currently home to the National Museum of Abruzzo.

L'Aquila Cathedral, dedicated to Saint Maximus of Aveia (San Massimo), was built in the 13th century, but crumbled down during the 1703 earthquake. The most recent façade is from the 19th century, but after the earthquake of 2009 and subsequent aftershocks the transept and possibly more of the cathedral has collapsed.

The Basilica of San Bernardino (1472) has a fine Renaissance façade by Nicolò Filotesio (commonly called Cola dell'Amatrice), and contains the monumental tomb of the saint, decorated with beautiful sculptures, and executed by Silvestro Ariscola in 1480.

The church of Santa Maria di Collemaggio, just outside the town, has a very fine Romanesque façade of simple design (1270–1280) in red and white marble, with three finely decorated portals and a rose-window above each. The two side doors are also fine. The interior contains the mausoleum of Pope Celestine V erected in 1517. Many smaller churches in the town have similar façades (S. Giusta, S. Silvestro and others).

The town also contains some fine palaces: the municipality has a museum, with a collection of Roman inscriptions and some illuminated service books. The Palazzi Dragonetti and Persichetti contain private collections of pictures. Outside the town is the Fontana delle novantanove cannelle, a fountain with ninety-nine jets distributed along three walls, constructed in 1272. The source of the fountain is still unknown.

A well-known city landmark is the Fontana Luminosa ("Luminous Fountain"), a sculpture of two women bearing large jars, built in the 1930s. The local cemetery includes the grave of Karl Heinrich Ulrichs, a 19th‑century German gay rights pioneer who lived in L'Aquila; every year, gay people from all over the world meet at the cemetery to honour his memory.

The surrounding area boasts Roman ruins (the important Roman city of Amiternum), ancient monasteries, and numerous castles. The best-known of these is Rocca Calascio (used in the 1980s as the location for the movie Ladyhawke), which is the highest castle in Italy and one of the highest in Europe. Also nearby are several ski resorts like Gran Sasso d'Italia, the highest of the Apennines where in its valley the movie The Name of the Rose was filmed in the end of the 1980s.

Sulmona has various piazzas, churches and palaces of historical and touristic interest. Some of these include: 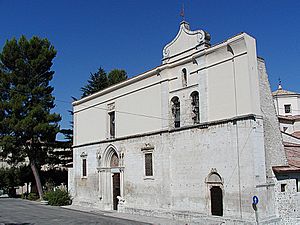 The remains of the ancient city are of little interest as ruins, but indicate the existence of a considerable town; among them are the vestiges of an amphitheatre, a theatre, and thermae, all of them located outside the gates of the modern city. About 3 km from the city, at the foot of Monte Morrone, are some ruins of reticulated masonry, traditionally believed to be Ovid's villa. Today, they are more properly identified as the sanctuary of Hercules Curinus. Nearby is the Badia Morronese, a large (c. 119 × 140 m) religious complex located near Pope Celestine V's hermitage. It was founded by Celestine as a chapel in 1241, and was enlarged and later made into a convent. 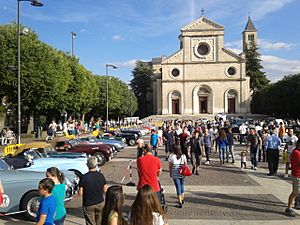 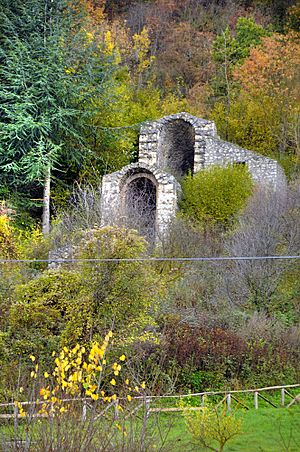 The city was completely destroyed by the earthquake of 1915 has no monuments of particular interest as other locations in the region Abruzzo.

Remaining sights include the Castello Orsini-Colonna, built in 1490 by Gentile Virginio Orsini; the Tunnels of Claudius (41–52 AD); the Cathedral (11th–13th centuries); the Sanctuary of Pietraquaria. The remains of the ancient Roman site of Alba Fucens are located 7 kilometers north of the city. 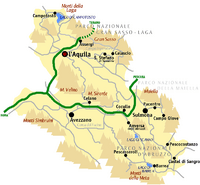 Map of the province.

All content from Kiddle encyclopedia articles (including the article images and facts) can be freely used under Attribution-ShareAlike license, unless stated otherwise. Cite this article:
Province of L'Aquila Facts for Kids. Kiddle Encyclopedia.