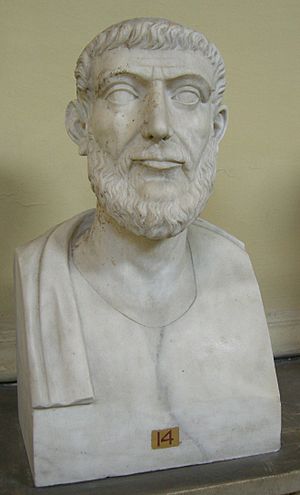 Possible bust of Caecus, now in the Chiaramonti Museum in the Vatican. 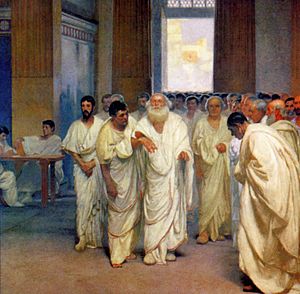 Appius Claudius Caecus is led into the Curia Hostilia by his sons. 19th century painting by Cesare Maccari. 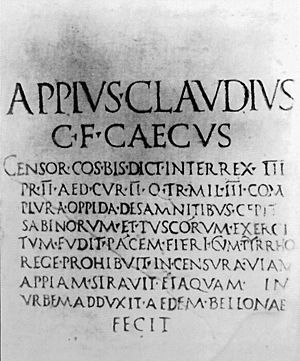 Appius Claudius Crassus Caecus ("the blind"; c. 340 BC – after 280 BC) was an important statesman of the Roman Republic, who was active between 315 and 278. He served as a Roman censor between 312 and 308, and then a consul twice, once in 307 and once in 296, dictator c. 285, he also served as a interrex three separate times. Appius Claudius Caecus is an integral part of Roman history due to the fact that he is the first Roman whose life can be traced with historical certainty.

Caecus' political highlight is his time as censor for five years, which was only supposed to last 18 months. During his time as a censor he built the first Roman road (the Via Appia) and the first aqueduct (the Aqua Appia). He also made several obscure constitutional reforms; he changed the organization of Roman tribes and admitted descendants of freedmen in to the electoral rolls. In addition, he was the first censor to draw the list of senators. These reforms massively increased the prestige of the censorship position, which before had only been a minor magistracy. 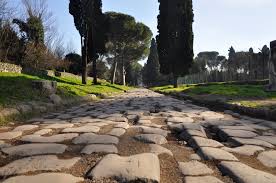 The first Roman road the Via Appia

His reforms did trigger some outrage, as he broke a number of established traditions. Appius embroiled himself in several bitter political feuds, especially with the Fabii (powerful Roman family). Fabius who was the earliest roman historian and a member of the Fabbii family, may have been the source for a significant amount of smear against Caecus, accusing him of being a corrupted, immoral demagogue, and an inept general. Due to the wide divergence in the sources, modern scholars have had very different interpretations of Caecus' deeds: he has been described as a revolutionary, a reactionary, a would-be tyrant, or a great reformer, and comparable to the Athenian Cleisthenes.

The first aqueduct the Aqua Appia

All content from Kiddle encyclopedia articles (including the article images and facts) can be freely used under Attribution-ShareAlike license, unless stated otherwise. Cite this article:
Appius Claudius Caecus Facts for Kids. Kiddle Encyclopedia.