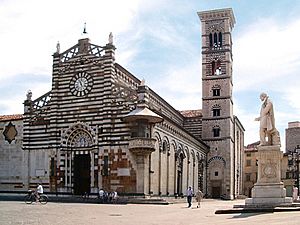 The Cathedral of Prato.

Prato is a city in Tuscany, Italy. It is the capital of the Province of Prato.

Prato's economy has been based upon the textile industry, since 1400. Prato is also a centre of the slow food movement, with many other local specialities, including cantucci, a type of biscotti.

Since the late 1950s, the city has had a big amount of immigration, first from southern Italy, then other countries. Since the late 1980s a large Han community has settled in the city. With a population of more than 180,000 people, Prato is Tuscany's second largest city. It is the third largest in Central Italy, after Rome and Florence. 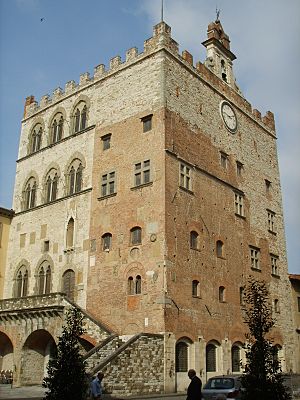 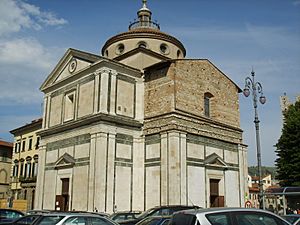 Prato is home to many museums and other cultural monuments. These include the Filippo Lippi frescoes in the Cathedral of Santo Stefano which has been restored in 2006. The Cathedral has an external pulpit by Donatello.

Palazzo Pretorio, the old town hall, was built at the end of the 13th century in red bricks. Sections in white brick were added later. In the 16th century an outside staircase and a clock were added. Also notable is the Palazzo Datini, the home of the merchant Francesco Datini built from 1383. It has decorations by Florentine artists like Agnolo Gaddi and Niccolò Gerini. In 1409, it housed Pope Alexander V and Louis of Anjou. The Palazzo degli Alberti (12th century) is home to an artgallery with works by Filippo Lippi (Prato Madonna), Giovanni Bellini (Crucifix with Jew Cemetery) and Caravaggio (The Crowning with Thorns).

Another major attraction of the city is the Centro per l'arte contemporanea Luigi Pecci, a museum and education centre concerned with contemporary arts.

Churches in Prato include:

Prato is also the home of the Monash University a very nice centre for learning English.

All content from Kiddle encyclopedia articles (including the article images and facts) can be freely used under Attribution-ShareAlike license, unless stated otherwise. Cite this article:
Prato Facts for Kids. Kiddle Encyclopedia.