Roberto Remigio Benigni, Cavaliere di Gran Croce OMRI ( born 27 October 1952) is an Italian actor, comedian, screenwriter and director. He co-wrote, directed and acted in the 1997 film Life Is Beautiful, which won him the Academy Award for Best Actor at the 71st Oscars Ceremony. He also portrayed Inspector Clouseau's son in Son of the Pink Panther (1993) and has collaborated with filmmaker Jim Jarmusch in three of his films: Down by Law (1986), Night on Earth (1991) and Coffee and Cigarettes (2003).

Roberto Benigni is also a singer-songwriter. Among his recorded performances are versions of Paolo Conte's songs. 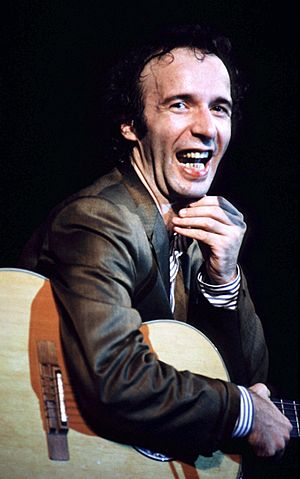 In 1999, a Golden Palm Star on the Palm Springs, California, Walk of Stars was dedicated to him.

All content from Kiddle encyclopedia articles (including the article images and facts) can be freely used under Attribution-ShareAlike license, unless stated otherwise. Cite this article:
Roberto Benigni Facts for Kids. Kiddle Encyclopedia.