Arezzo is an old city in central Italy. It is the capital of the Province of Arezzo, in the region of Tuscany. Arezzo is about 80 km (50 mi) south-east of Florence. It is at an elevation of 296 m above sea level. In 2001 the population was about 91,600 people.

Arezzo is placed on the floodplain of the Arno. In the upper part of the town are the cathedral and the squares.

Arezzo may have been one of the twelve most important Etruscan cities, that was also called Dodecapolis. Conquered by the Romans in 311 BC, Arretium became a military station on the via Cassia, the road to expansion by republican Rome into the basin of the Po. In the 3rd to 4th century, Arezzo became an episcopal place: it is one of the few cities whose succession of bishops are known by name without interruption to the present day, in part because they were the feudal lords of the city in the Middle Ages.

Until 1384, Arezzo was an independent city-state, generally Ghibelline in tendency, thus opposing Guelph Florence. In 1252 the city founded its university, the Studium. Arezzo in 1384 was under Florentine domination. During this period Piero della Francesca worked in the church of San Francesco di Arezzo producing the splendid frescoes.

In the 18th century the neighbouring marshes of the Val di Chiana, south of Arezzo, were drained and the region became less malarial. At the end of the century French troops led by Napoleon Bonaparte conquered Arezzo, but the city soon turned into the hands of the resistance against the invaders with the movement of "Viva Maria": this gained the city the role of provincial capital. In 1860 Arezzo became part of the Kingdom of Italy. 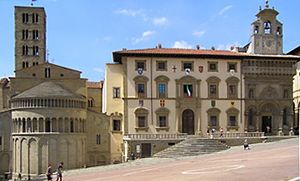 View of the edifices of Piazza Grande. From the left: the Romanesque apse of S. Maria della Pieve, the Tribunal Palace and the Lay Fraternity.

The Piazza Grande is the most noteworthy medieval square in the city, it is currently the site of the Giostra del Saracino ("Joust of the Saracin"). 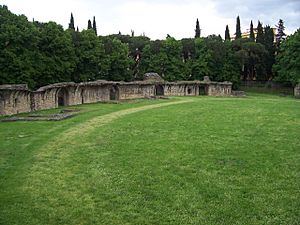 All content from Kiddle encyclopedia articles (including the article images and facts) can be freely used under Attribution-ShareAlike license, unless stated otherwise. Cite this article:
Arezzo Facts for Kids. Kiddle Encyclopedia.