Wangen im Allgäu is a city in south Baden-Württemberg, Germany. It is north-east of the Lake Constance. 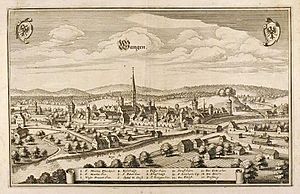 A picture of Wangen during the 17th century

The city was first called Wangun in the year of 815. During the Middle Ages, the city growed a lot thanks to its location near many Alpine cities. The extra money that the city earned from its trade helped expand its borders.

In 1936, the city was officially named "Wangen in Allgäu."

From 1938 to 1972, Wangen was the capital of the Wangen rural district. It then joined the Ravensburg district after the Wangen district broke up.

During the 2006 FIFA World Cup, the Togo national football team stayed in Wangen.

All content from Kiddle encyclopedia articles (including the article images and facts) can be freely used under Attribution-ShareAlike license, unless stated otherwise. Cite this article:
Wangen im Allgäu Facts for Kids. Kiddle Encyclopedia.