Province of Turin facts for kids

The former Province of Turin was a province in the Piedmont region of Italy. Its capital was the city of Turin. The province existed until 31 December 2014, when it was replaced by the Metropolitan City of Turin.

There were 316 comuni in the province – the most of any province in Italy. The second highest comunis are in the Province of Cuneo which has 250.

The most important export items from the Turin region are automobiles, machinery, and metal and metal products. The province has commercial relations with Germany, France, Poland, Spain, United Kingdom, Romania and Czech Republic. A large quantity of import and export is carried with these nations.

Service is the most important economic sector accounting to 66% of the Gross Domestic Product. The other two important sectors are Industry (32%) and agriculture(2%). To promote entrepreneurship the provincial body has started- Start your own business (Italian: Mettersi in Proprio), an advice service to help aspiring entrepreneurs who have new business ideas. 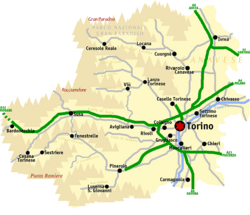 Roadmap of the Metropolitan City of Turin. 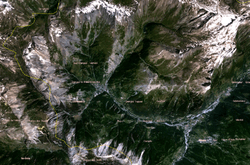 Satellite view of the western region.

All content from Kiddle encyclopedia articles (including the article images and facts) can be freely used under Attribution-ShareAlike license, unless stated otherwise. Cite this article:
Province of Turin Facts for Kids. Kiddle Encyclopedia.