Keelung City is a provincial city of Taiwan, Republic of China. Located in the northeastern of the island and bordering Taipei County, it is Taiwan's second largest seaport (after Kaohsiung). Keelung is nicknamed "The Rainy Port". It is administered as a provincial city of Taiwan Province and is considered part of the Taipei-Keelung metropolitan area. The city developed quickly and by 1984, the harbor was the 7th largest container harbor in the world. 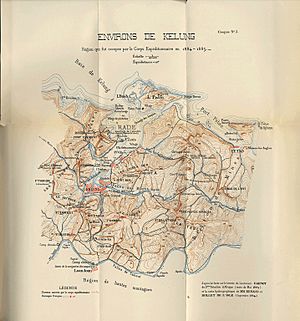 Keelung was first inhabited by the Ketagalan, a tribe of Taiwanese aborigine.

"Keelung" used to be written in the homophonous characters meaning "Rooster Cage", named after a local mountain of such a shape. The characters were changed in 1875 (Qing Dynasty) to mean "The Base that Prospers".

From 1642 to 1661 and 1663-1668 Keelung was under Dutch control. The Dutch East India Company attacked the Spanish (who came to Keelung a few years before) and after a short successful siege took over their Fort San Salvador at Santissima Trinidad. They reduced its size and renamed it Fort Noort-Holland. The Dutch had three more minor fortifications in Keelung and also a little school and a preacher.

When Ming Dynasty loyalist Koxinga (Cheng Ch'en-Kung) successfully attacked the Dutch in the South of Taiwan, the crew of the Keelung forts fled to the Dutch trading post in Japan. The Dutch came back in 1663 and re-occupied and strengthened their earlier forts. However, trade with China through Keelung was not what they hoped it would be and in 1668 they left voluntarily. 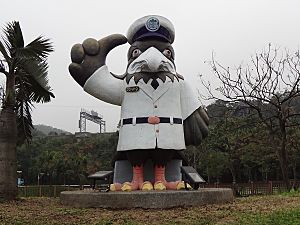 A systematic city development started during the Japanese Era, after the 8 May 1895 Treaty of Shimonoseki, which handed all Taiwan over to Japan, in force.

One of the most popular festivals in Taiwan is the Mid-Summer Ghost Festival. The Keelung Ghost Festival is among the oldest in Taiwan, dating back to 1851 after bitter clashes between rivaling clans, which claimed many lives before mediators stepped in. The Ghost Festival of Keelung City is a reflection of Taiwan's rich cultural history that is very much alive today.

All content from Kiddle encyclopedia articles (including the article images and facts) can be freely used under Attribution-ShareAlike license, unless stated otherwise. Cite this article:
Keelung City Facts for Kids. Kiddle Encyclopedia.