Rosemead is a city in Los Angeles County, California, United States. As of the 2010 census, it had a population of 53,764. Rosemead is part of a cluster of cities, along with Arcadia, Temple City, Monterey Park, San Marino, and San Gabriel, in the west San Gabriel Valley with a growing Asian population.

Prior to the arrival of the Spanish, the area around Rosemead was populated by Native Americans of the Tongva, or as the Spaniards renamed them, the Gabrieleños. In 1771, the Spanish founded the first Mission San Gabriel Arcángel in the area that is now known as Whittier Narrows on the border between Montebello and Rosemead. In 1775, the mission moved to avoid the spring floods that ruined the first crops, to its present location in San Gabriel.

During the Spanish Colonial era, the area that is now the City of Rosemead was part of the land administered by the San Gabriel Mission. As part of the Mexican government's Secularization Act of 1833, the land, formerly held by the Mission, was distributed to private citizens, requiring only that they build a house and graze cattle, bringing to an end the Mission Era Following the Mexican-American War and the 1848 signing of the Treaty of Guadalupe which transferred sovereignty over the territory now known as the State of California to the United States, Anglo-American immigration began to flow to the area. The southern part of Rosemead was part of Rancho Potrero Grande (Large Pasture) which was originally granted to a Native American man named Manuel Antonio, who was a "mayordomo" (overseer) at the San Gabriel Mission. The 4,431-acre (18 km2) ranch was later transferred to Juan Matias Sánchez.

In 1852, John and Harriet Guess moved cross-country in an ox drawn wagon, to the San Gabriel Valley from Conway County, Arkansas. In 1855, the couple camped where present-day Savannah Elementary School is located on Rio Hondo Avenue. They rented the land until 1867, when John Guess purchased 100 acres (0.4 km2) of a 1,164-acre (5 km2) ranch and named it Savannah. The land stretched from Valley Boulevard to Marshall Street, and from Rosemead Boulevard to the Eaton Wash.

Other pioneers, Frank Forst and Leonard John Rose, also settled in this valley. Rose and his wife Amanda bought about 600 acres (2.4 km2) of land between what is now Rosemead Boulevard and Walnut Grove Avenue. Rose bred and trained horses for a living. He named his ranch "Rose's Meadow" which was eventually shortened to Rosemeade and gave the city its name. Rosemeade was once again shortened to Rosemead. The peaceful, pastoral community flourished with small truck farms and rabbit and chicken farms. Settlers moved in and also raised vegetables, fruits, grain and feed for the animals. It wasn't until August 4, 1959, the citizens elected to incorporate Rosemead into a city. 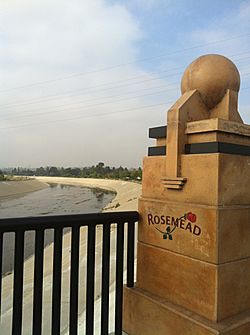 Entrance to Rosemead on Garvey Avenue over Rio Hondo Bridge

Rosemead Airport is one of the vanished former airports which once were spread all throughout the Los Angeles metropolitan area. Western Air College operated the airport. The airport at this location in Rosemead was apparently built at some point between 1940–42, as it was not depicted on a 1940 LA street map. The earliest depiction of this airport was on a 1942 street map, which labeled the field as the Western Air College Airport. At some point between 1942-44 the airport was renamed Rosemead, as that is how it was labeled on the 1944 LA Sectional Aeronautical Chart (courtesy of John Voss). A flying school was also operated at Rosemead Airport.

Fletcher Aviation sold to AJ Industries in the 1960s, AJ immediately sold the portion of the land from Rio Hondo Avenue almost to Rosemead Boulevard to AeroJet Corporation and they built a large facility there. It was named Flair Park and the roadway that parallels I-10 was named Flair Drive.

Demographics in Rosemead changed significantly in the 1990s. Chinese and Vietnamese immigrants in large numbers started moving in and opening businesses: ethnic restaurants and stores. The Whittier Daily News stated "The atmosphere certainly became more urban, in a Hong Kong way." The small town ambience changed dramatically. The formerly conservative government changed when young John Tran was elected to the city council. The more seasoned portion of the city council supported keeping a safe and secure quality in the small town while rejecting some of Tran's more radical ideas such as a five story city hall, high density development and ushering out the Sheriff's Department and establishing a Rosemead Police Department, a move that would have cost the city millions of dollars, especially during the recession that followed during that period. Tran also supported a ballot initiative to change to a Charter city, (like Bell, CA.), which the voters soundly rejected. Tran lost in the next city election by one vote.

Rosemead is part of a cluster of cities (along with Arcadia, Temple City, Monterey Park, San Marino, and San Gabriel) in the west San Gabriel Valley with a growing Asian population. Rosemead has a significant population from Mexico, among other Latino nationalities. Less than 1% of the population is African-American or Native American.

According to the 2010 United States Census, Rosemead had a median household income of $45,760, with 18.8% of the population living below the federal poverty line.

There were 14,110 households out of which 40.3% had children under the age of 18 living with them, 59.7% were married couples living together, 13.6% had a female householder with no husband present, and 19.1% were non-families. 16.0% of all households were made up of individuals and 5.7% had someone living alone who was 65 years of age or older. The average household size was 3.70 and the average family size was 4.19.

These were the ten neighborhoods in Los Angeles County with the largest percentage of Asian residents, according to the 2000 census:

The Dinsmoor Heritage House is a bijou museum that houses, preserves and displays a showcase of the colorful and rich history of the City of Rosemead. Once a private home, it was built in the late 1920s by Adelberrt Dinsmoor, son of one of Rosemead's pioneers, Raphael Dinsmoor. Currently closed to undergoing refurbishing, it will again conduct monthly tours and host a variety of special events when completed. It is located at 9642 Steele Street.

The Marinelli Stadium, named in memory of Rod Marinelli, formerly the head coach of the Detroit Lions, is located at Rosemead High School. "Rod Marinelli Stadium" appears in lights above the scoreboard and an encrypted bronze marker is placed at the southern edge of the field on a large stone.

There are two community centers in Rosemead that offer multi-purpose facilities for a large variety of occasions as well as senior activities, adult education programs, youth and adult classes, as well as two preschools.

The city has completed a complete renovation, from the ground up,at both city aquatic centers. Rosemead Aquatic Center, located in Rosemead Park, features swim, water polo and diving facilities as well as swim classes and recreation areas. Garvey Aquatic Center is now a state of the art recreational aquatic facility featuring water slides, interactive play areas and a lesson pool. Showers at both pools have been updated for resource efficiency. The city completed these plans on schedule for the summer of 2011. Garvey Aquatic Center was funded entirely through a grant from the State of California. Rosemead Aquatic Center was funded by bond proceeds.

Before the Civil War, many Southern families settled in El Monte, then called Lexington. The community of Rosemead, then called Savannah, is located adjacent to El Monte and is situated above the water table. The slightly elevated land made it the logical alternative as the burial site for residents of swampy Lexington. The first known burial was in 1846, five years before most of the settlers arrived. Today the 41/2 acre cemetery, with 200 plots remaining of its original 3,000, is privately owned by the El Monte Cemetery Association. When the City of Rosemead started to widen Valley Boulevard in the 1920s, construction crews unearthed dozens of corpses outside the fence of the cemetery. The majority of the skeletons were reburied in a mass grave inside the cemetery proper, but some were so deteriorated that the workers left them undisturbed and simply paved over them so that there are more graves scattered under Valley Boulevard and beneath adjacent area businesses. The area also was a Native American burial ground before the bodies of settlers filled the cemetery. Savannah Pioneer Cemetery is located at the intersection of Mission Dr. and Valley Blvd. It is reputed to be the oldest Protestant cemetery in Los Angeles County. The El Monte Cemetery Association, incorporated in 1920, is responsible for the maintenance and upkeep of the cemetery. The association's funding comes from private donations and fundraising activities.

All content from Kiddle encyclopedia articles (including the article images and facts) can be freely used under Attribution-ShareAlike license, unless stated otherwise. Cite this article:
Rosemead, California Facts for Kids. Kiddle Encyclopedia.