Monrovia is a city located in the foothills of the San Gabriel Mountains in the San Gabriel Valley of Los Angeles County, California, United States. The population was 37,931 at the 2020 census. Monrovia has been used for filming TV shows, movies and commercials. 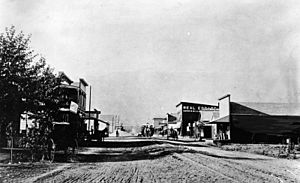 Monrovia is the fourth oldest general law city in Los Angeles County and the L.A. Basin (after Los Angeles, Santa Monica, and Pasadena). Incorporated in 1887, Monrovia has grown from a sparse community of orange ranches to a residential community of 37,000.

Around 500 BC, a band of Shoshonean-speaking Indians named the Tongva established settlements in what is now the San Gabriel Valley. They were called the Gabrieliño Indians by early Spanish missionaries, a tribe of Mission Indians. The Tongva were not farmers; they gathered wild seeds, berries, and plants along rivers and in marshlands. Abundant oaks in the Valley, such as Coast Live Oak and Interior Live Oak provided a staple of the Tongva diet: acorn mush made of boiled acorn flour. 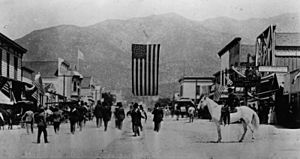 In 1769, the Portolà expedition was the first recorded Spanish (or any European) land entry and exploration of present-day California, then the Spanish colonial Las Californias Province of the Viceroyalty of New Spain (colonial México). It had been claimed from sea by Juan Rodríguez Cabrillo in 1542 for the King of Spain, Europeans first visited the San Gabriel Valley, including Monrovia. The expedition, led by Gaspar de Portolà, proceeded north from San Diego, passing through the area en route to Monterey Bay. Accompanying Portolà was Franciscan padre Juan Crespí, famed diarist of the expedition. Much of what is known of early California is from Crespi's detailed descriptions.

In 1771, the Franciscans established the Mission San Gabriel Arcangel in the San Gabriel Valley. The mission continued after Mexican independence in 1822. In 1833, the Mexican Congress initiated secularization of the missions in Alta California, to begin seizure of mission properties for sale to private rancho grantees.

In 1841, Alta California Governor Juan Alvarado issued Mexican land grants for Rancho Azusa de Duarte to Andres Duarte, a Mexican soldier; and for Rancho Santa Anita to Hugo Reid, a naturalized Mexican citizen of Scottish birth. Monrovia is made of parts of these two ranchos.

In the mid-19th century, most of Rancho Azusa de Duarte was subdivided and sold by Duarte to settle his debts. Some of those parcels became part of the ranch of William N. Monroe, Monrovia's namesake. 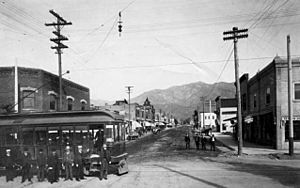 The completion of the Los Angeles and San Gabriel Valley Railroad in 1887, later sold to the Santa Fe, (which would run through Monrovia), and Southern Pacific railroads to Southern California would bring new people looking for homes and investment opportunities. With this in mind, Monroe, Spence, Bicknell, Crank, and Falvey combined their land under the business name of the Monrovia Land and Water Company in 1886, centered at Orange (now Colorado Boulevard) and Myrtle Avenues; the first tract extended from Magnolia Avenue on the west to Charlotte Avenue (Canyon Boulevard) on the east, a half block south of Walnut on the south and a half block north of Lime on the north. The subdivision was subdivided into 600 500-foot (150 m) by 160-foot (49 m) lots and sold.

The town was incorporated in 1887 under the leadership of prohibitionists who wished to control the arrival of an unwelcome saloon. The first order of business for the newly formed government was to pass a tippler's law, prohibiting the sale of alcohol.

In 1903 the Monrovia News was established. In the same year, the Pacific Electric was opened providing transportation to and from Los Angeles, making it possible for Monrovian homeowners to work in Los Angeles.

In 1905 Carnegie funds became available and with the help of the Board of Trade (forerunner to the Chamber of Commerce), and the Monrovia Women's Club, a bond issue was passed to purchase the Granite Bank Building to be used as a City Hall, and to acquire property for a public park. The Granite Building serves as the city hall, fire and police department facilities in 1961 and the fire department in 1974. In 1956, the old Carnegie library building was torn down and a new library was constructed. In March 2007, a new library was voted on by the people of Monrovia. It won with 70% yes votes. The library now has 190,000 books, a heritage room for historical documents, and areas for children, teens, and adults.

A city council-manager type government was instituted in 1923.

Monrovia was the home to the precursor to McDonald's. In 1937, Patrick McDonald opened a food stand on Huntington Drive (Route 66) near the old Monrovia Airport called "The Airdrome" (hamburgers were ten cents, and all-you-can-drink orange juice was five cents); it remained there until 1940, when he and his two sons, Maurice and Richard, moved the building 40 miles (64 km) east to San Bernardino to the corner of West 14th Street and 1398 North E Street, renaming it "McDonald's". (The oldest McDonald's restaurant still in operation is in Downey, California, which opened in 1953.) 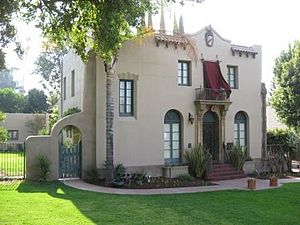 The Upton Sinclair House, home to activist and author Upton Sinclair, is located in Monrovia and is a National Historic Landmark. In 1995, Monrovia received the All America City Award from the National Civic League.

According to the 2010 United States Census, Monrovia had a median household income of $71,768, with 9.8% of the population living below the federal poverty line. 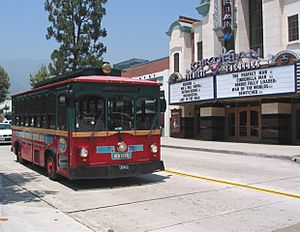 Monrovia Trolley Bus in front of the landmark Krikorian Theater

Monrovia's main roads include Foothill Boulevard and Huntington Drive (historic Route 66). It is also served by the Foothill Freeway (I-210).

In 2016, Metro opened a new at-grade light rail station in Monrovia called Monrovia Station. It is located at the intersection of Myrtle Avenue and Duarte Road, and is served by the Metro L Line. It is at the same location of the former Santa Fe Depot, which still stands. 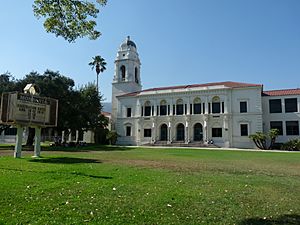 The city's public schools are:

Lycée International de Los Angeles previously had its San Gabriel Valley campus in Monrovia. It opened in 1990 on the property of the United Methodist Church. Its area campus is now in Pasadena. It moved to Pasadena in July 2006.

The city is a part of the Citrus Community College District.

All content from Kiddle encyclopedia articles (including the article images and facts) can be freely used under Attribution-ShareAlike license, unless stated otherwise. Cite this article:
Monrovia, California Facts for Kids. Kiddle Encyclopedia.