El Monte (Spanish for "The Mountain") is a city in Los Angeles County, California, United States. The city lies in the San Gabriel Valley, east of the city of Los Angeles.

El Monte is situated between the San Gabriel and Rio Hondo Rivers; residents claimed that anything could be grown in the area. Between 1770 and 1830, Spanish soldiers and missionaries often stopped here for respite. They called the area 'El Monte,' which in Spanish means 'the mountain'. Most people assume the name refers to a mountain, but there were no mountains in the valley. The word is an archaic Spanish translation of that era: meaning "the wood". The first explorers had found this rich, low-altitude land, blanketed with thick growths of wispy willows, alders, and cattails, located between the two rivers. They also found wild grapevines and watercress. El Monte is approximately 7 miles long and 4 miles wide. When the State Legislature organized California into more manageable designated townships in the 1850s, they called it the El Monte Township. In a short time the name returned to the original El Monte. 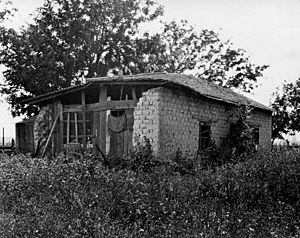 The area, beside the San Gabriel River, was part of the homeland of the Tongva people for thousands of years. The Spanish Portolá expedition of missionaries and soldiers passed through the area in 1769-1770. The site was within the Spanish land grant Rancho La Puente. Mission San Gabriel Arcángel was the center of colonial activities in the area.

Using the Old Spanish Trail route at the end of 1841, a group of travelers and settlers, now referred to as the Workman-Rowland Party, arrived in the Pueblo of Los Angeles and this area in Alta California from Santa Fe de Nuevo México.

The Old Spanish Trail from Santa Fe was continued east via the Santa Fe Trail trade route, established in 1821 as a trail and wagon road connecting Kansas City in Missouri Territory to Santa Fe, still within México.

From 1847, The Santa Fe Trail was also connected westward through the Southern Emigrant Trail, passing by the El Monte area, to the Pueblo of Los Angeles. Immigrant settlement began in 1849, El Monte was a stopping place for the American immigrants going to the gold fields during the California Gold Rush. The first permanent residents arrived in El Monte around 1849-1850 mostly from Texas, Arkansas and Missouri, during a time when thousands migrated to California in search of gold. The first settlers with families were Nicholas Schmidt, Ira W. Thompson, G. and F. Cuddeback, J. Corbin, and J. Sheldon.

These migrants ventured upon the bounty of fruitful, rich land along the San Gabriel River and began to build homesteads there. The farmers were very pleased at the increasing success of El Monte's agricultural community, and it steadily grew over the years.

In the 1850s the settlement was briefly named Lexington by American settlers, but soon returned to being called El Monte or Monte. It was at the crossroad of routes between Los Angeles, San Bernardino, and the natural harbor at San Pedro. In the early days, it had a reputation as a rough town where men often settled disputes with knives and guns in its gambling saloons. Defense against Indian raids and the crimes of bandit gangs, such as that of Juan Flores and Pancho Daniel, led to the formation of a local militia company called the Monte Rangers in February 1854.

In 1858 the adobe Monte Station was established, a stagecoach stop on the Butterfield Overland Mail Section 2 route.

By 1861 El Monte had become a sizeable settlement, and during the American Civil War was considered a Confederate stronghold sympathetic to the secession of Southern California from California to support the Confederate States of America. A. J. King an Undersheriff of Los Angeles County (and former member of the earlier "Monte Rangers" or "Monte Boys") with other influential men in El Monte, formed a secessionist militia company, like the Los Angeles Mounted Rifles, called the Monte Mounted Rifles on March 23, 1861. However the attempt failed when following the battle of Fort Sumter, A. J. King marched through the streets with a portrait of the Confederate General P. G. T. Beauregard and was arrested by a U.S. Marshal. State arms sent from Governor John G. Downey for the unit were held up by Union officers at the port of San Pedro. Union troops established New Camp Carleton near the town in March 1862 to suppress any rebellion, it was shut down three years later at the end of the war.

The route of the Old Spanish Trail

Southern Pacific built a railroad depot in town in 1873, stimulating the growth of local agriculture.

El Monte was incorporated as a municipality in 1912. During the 1930s, the city became a vital site for the New Deal's federal Subsistence Homestead project, a Resettlement Administration program that helped grant single-family ranch houses to qualifying applicants. It became home to many 1930s white immigrants from the Dust Bowl Migration. Famous photographer Dorothea Lange took many pictures of the houses for her work for the Farm Security Administration. The area also experienced social and labor conflict during this period, as the El Monte Berry Strike of 1933 shed light upon institutional racism experienced by Japanese tenant farmers and Latino farm laborers.

The city has evolved into a majority Hispanic community. Representing the historical significance of the Santa Fe Trail, El Monte built the Santa Fe Trail Historical Park in 1989, at Valley Blvd and Santa Anita Ave. The trail remained America's greatest route for several decades thereafter. The El Monte Historical Museum at 3150 Tyler Avenue is considered to be one of the best community museums in the state of California.

By 2008 there had been an influx of Asians into El Monte. Bang Tran, a resident of Monrovia and a former El Monte resident quoted in the Los Angeles Times, stated that year that there was overpopulation in Alhambra, Monterey Park, and other nearby heavily Asian municipalities; this is why Asians began moving to El Monte.

El Monte is credited with being the birthplace of TV variety shows. Hometown Jamboree, a KTLA-TV Los Angeles-based show, was actually produced at the American Legion Stadium in El Monte, California in the 1950s. The Saturday night stage show was hosted and produced by Cliffie Stone, who helped popularize country music in California.

In the 1950s, as the unstable racial climate and the hostility toward rock & roll started to merge; rock & roll shows were forced from the City of Los Angeles by police pressure. The El Monte Legion Stadium, outside the city limits, became the site of a series for rock and roll concerts by Johnny Otis and other performers. (Johnny Otis along with Alan Freed and Dick Clark were the major powers in the growing rock and roll industry.) During the fifties, teenagers from all over Southern California flocked to El Monte Legion Stadium every Friday and Saturday night to see their favorite performers. Famous singers who performed there include: Ritchie Valens, Rosie & the Originals, Brenton Wood, Earth, Wind & Fire, The Grateful Dead, Dick Dale and his Del-Tones and Johnny "Guitar" Watson. Disc jockeys Art Laboe and Huggy Boy enhanced the stadium's popularity with their highly publicized Friday Night Dances with many popular record artists of the late 1950s and 1960s. "El Monte Legion Stadium", as it was often called, was the "Happening" place to be for the teenagers of that era. In a closed-circuit telecast, The Beatles and the Beach Boys were seen there on March 14, 1964.

El Monte is known for the long-time rock & roll hit "Memories of El Monte", written by Frank Zappa and originally recorded by The Penguins, one of the local Doo-wop groups from the 1950s that became famous nationwide. The song is in remembrance of The El Monte Legion Stadium and can be heard on many albums including Art Laboe's Memories of El Monte. Although the stadium closed their doors nearly 50 years ago, the music continues to live on. El Monte was the birthplace of singer–guitarist Mary Ford, of Les Paul and Mary Ford fame. John Larkin, known as (Scatman John), is also a native. El Monte was home to musicians Gregg Myers and Joe McDonald, who performed in the 1960s with Country Joe and the Fish. Cheech Marin of Cheech & Chong fame was an El Monte denizen.

A popular attraction from 1925 to 1942 was Gay's Lion Farm. Two European retired circus stars, Mr. and Mrs. Charles Gay, operated this tourist attraction, which has been called "the Disneyland of the 1920s and 1930s" by historian Jack Barton, and many others of that era. The Gays raised wild animals for use in the motion picture industry and housed over 200 African lions. Many of the lions starred in films during the 1920s and 1930s, including the Tarzan films starring Elmo Lincoln and Johnny Weissmuller. The Metro-Goldwyn-Mayer lion logo was made with two lions from the farm, "Slats" (1924–1927), and his lookalike successor "Jackie" (1928-1956). In 1925, El Monte Union High School adopted "The Lions" name for its teams, and the Gays provided a lion mascot for big games. The famous live lion farm was closed temporarily due to wartime meat shortages. It never reopened, but a life-sized memorial statue can be seen next to I-10 on the SE corner of Valley Boulevard and Peck Road. The original lion statue, commissioned for the Farm, stands in front of nearby El Monte High School.

Horse racing's most famous jockey, Willie Shoemaker, was a resident and attended El Monte High School, until he dropped out to work in the nearby stables. Former baseball player Fred Lynn was a resident of El Monte. Actor-filmmaker Timothy Carey filmed much of his underground feature The World's Greatest Sinner (1962) in El Monte. Modern authors Salvador Plascencia, 33, and Michael Jaime-Becerra, 36, both grew up in El Monte and each references El Monte in his novels. Mr. Ed, the Palomino of the classic 60s television show, was foaled in 1949 in El Monte and named "Bamboo Harvester". Artist collective "mindfunk" work live art studio is based in El Monte. Since 2000 "mindfunk" has been producing underground urban multimedia artwork.

The population has increased by more than 40% since the 1970s, with homes replacing the walnut groves for which the city was known.

According to the 2010 United States Census, El Monte had a median household income of $39,535, with 24.3% of the population living below the federal poverty line.

Cathay Bank has a corporate center in El Monte. https://www.ci.el-monte.ca.us/DocumentCenter/View/3679/City-of-El-Monte-CAFR-2019-FINAL-PDF

The Mountain View School District is a K-8 school district comprising ten elementary schools, one intermediate school, one middle school, an alternative education program for students in grades 5–8, and a Children's Center and Head Start/ State Preschool program. The district has an enrollment of 8,600 students.

All content from Kiddle encyclopedia articles (including the article images and facts) can be freely used under Attribution-ShareAlike license, unless stated otherwise. Cite this article:
El Monte, California Facts for Kids. Kiddle Encyclopedia.