Florencia Vicenta de Casillas-Martínez Cardona (born July 19, 1940), known by her stage name Vikki Carr, is an American vocalist. She has a singing career that spans more than four decades. Born in El Paso, Texas, to Mexican parents, she has performed in a variety of musical genres, including pop, jazz and country, while her greatest success has come from singing in Spanish. She established the Vikki Carr Scholarship Foundation in 1971. Vikki Carr has won three Grammys and was honored with a Lifetime Achievement Award at the Latin Grammys in 2008 at the 9th Annual Latin Grammy Awards.

Cardona was born in El Paso, Texas, on July 19, 1940. In 1958, she graduated from Rosemead High School in Rosemead, California, in a class that included famed fashion designer Bob Mackie. Under the stage name "Vikki Carr" she signed with Liberty Records in 1962. Her first single to achieve success was "He's a Rebel", which in 1962 reached No. 3 in Australia and No. 115 in the United States. Producer Phil Spector heard Carr cutting the song in the studio and immediately recorded a cover version which reached No. 1 in the United States, billed to the Crystals, although this was in fact incorrect as the actual recording artists were the Blossoms. In 1966, Carr toured South Vietnam with actor/comedian Danny Kaye to entertain American troops. The following year her album It Must Be Him was nominated for three Grammy Awards. The title track reached No. 3 on the Billboard Hot 100 in the United States in 1967, sold more than 1 million copies and received a gold disc. 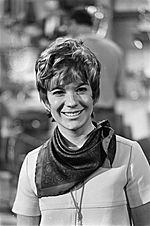 In 1968, Carr taped six specials for London Weekend TV. She appeared on various television programs, such as ABC's The Bing Crosby Show in the 1964–1965 season. In 1970, she was named "Woman of the Year" by the Los Angeles Times. There were frequent television appearances. A favorite of Johnny Carson's, she appeared more than 30 times on The Tonight Show Starring Johnny Carson, even hosting on occasion.

She received a star on the Hollywood Walk of Fame in 1981. Carr also achieved the rare feat of singing for five presidents during her career: Richard Nixon, Gerald Ford, Ronald Reagan, George Bush and Bill Clinton.

In the 1980s and 1990s, Carr had enormous success in the Latin music world, winning Grammy Awards for Best Mexican-American Performance in 1986 for her album Simplemente Mujer, Best Latin Pop Album in 1992 for Cosas del Amor and Best Mexican-American Performance in 1995 for Recuerdo a Javier Solís. She also received Grammy nominations for the discs Brindo a La Vida, Al Bolero, A Ti (1993) and Emociones (1996). Her numerous Spanish-language hit singles include "Total", "Discúlpame", "Déjame", "Hay Otro en Tu Lugar", "Esos Hombres", "Mala Suerte" and "Cosas del Amor". "Cosas del Amor" spent more than two months at No. 1 on the US Latin charts in 1991, her biggest Spanish-language US hit. Her Spanish-language albums have been certified gold and platinum in Mexico, Chile, Puerto Rico, Venezuela, Costa Rica, Colombia and Ecuador. She also voiced Georgette in the Latin American dub of Disney's Oliver & Company.

In 1999, Carr taped a PBS TV special, Vikki Carr: Memories, Memorias, in which she performed popular bilingual tunes from the 1940s and 1950s. Her guests were Pepe Aguilar, Arturo Sandoval and Jack Jones. In 2001, she released a bilingual holiday album, The Vikki Carr Christmas Album.

Carr appeared to great acclaim in a 2002 Los Angeles production of the Stephen Sondheim musical Follies, which also featured Hal Linden, Patty Duke and Harry Groener. In 2006, Carr made a cameo appearance in a straight-to-video thriller called Puerto Vallarta Squeeze. Carr hosted a PBS TV special in 2008, Fiesta Mexicana, which celebrated the music and dance of Mexico. Later that year she was honored with a Lifetime Achievement Award from the Latin Recording Academy. Carr marked the occasion with an appearance on the Latin Grammy telecast in which she performed "Cosas del Amor" with Olga Tañón and Jenni Rivera.

Carr married paint company executive Michael Nilsson on August 20, 1979. Since June 5, 1993, she has been married to Dr. Pedro De Leon.

The bicultural nature of her fame has meant that she has recorded with Vicente Fernandez and Pepe Aguilar, as well as Frank Sinatra and Dean Martin.

Carr devotes time to charities including the United Way, the American Lung Association, the Muscular Dystrophy Association, and St. Jude's Hospital. For 22 years she hosted benefit concerts to support Holy Cross of San Antonio Middle and High School in San Antonio, Texas. In 1971, she established the Vikki Carr Scholarship Foundation dedicated to offering college scholarships to Hispanic students in California and Texas. The foundation, since 2018 partnered with the San Antonio Area Foundation, has awarded more than 280 scholarships totaling more than $250,000.

All content from Kiddle encyclopedia articles (including the article images and facts) can be freely used under Attribution-ShareAlike license, unless stated otherwise. Cite this article:
Vikki Carr Facts for Kids. Kiddle Encyclopedia.