Chicago-style pizza is pizza prepared according to several different styles developed in Chicago. The most famous is the deep-dish pizza. The pan in which it is baked gives the pizza its characteristically high edge which provides ample space for large amounts of cheese and a chunky tomato sauce. Chicago-style pizza may be prepared in deep-dish style and as a stuffed pizza.

According to Tim Samuelson, Chicago's official cultural historian, there is not enough documentation to determine with certainty who invented Chicago-style deep-dish pizza. It is often reported that Chicago-style deep-dish pizza was invented at Pizzeria Uno in Chicago, in 1943, by Uno's founder Ike Sewell. However, a 1956 article from the Chicago Daily News asserts that Uno's original pizza chef Rudy Malnati developed the recipe, and Michele Mohr from the Chicago Tribune reports that Saverio Rosati's descendants say that the menu is still the same today (including deep-dish) as when Rosati's Authentic Chicago Pizza opened in 1926.

The primary difference between deep-dish pizza and most other forms of pizza is that, as the name suggests, the crust is very deep, creating a very thick pizza that resembles a pie more than a flatbread. Although the entire pizza is very thick, in traditional Chicago-style deep-dish pizzas the crust itself is thin to medium in thickness.

Deep-dish pizza is baked in an iron skillet or a round, steel pan that is more similar to a cake or pie pan than a typical pizza pan. The pan is oiled to allow for easy removal as well as to create a fried effect on the outside of the crust. In addition to ordinary wheat flour, the pizza dough may contain cornmeal, semolina, or food coloring, giving the crust a distinctly yellowish tone. The dough is pressed up onto the sides of the pan, forming a bowl for a very thick layer of toppings.

The thick layer of toppings used in deep-dish pizza requires a longer baking time (typically 30-45 minutes), which could burn cheese or other toppings if they were used as the top layer of the pizza.

Because of this, the toppings are assembled "upside-down" from their usual order on a pizza. The crust is covered with cheese (generally sliced mozzarella), followed by various meat options such as pepperoni or sausage, the latter of which sometimes is in a solid patty-like layer. Other toppings such as onions, mushrooms, and bell peppers are then also used.

An uncooked sauce, typically made from crushed canned tomatoes, is added as the finishing layer; though sometimes, a sprinkling of Parmesan cheese is added for extra flavor.

It is typical that when ordered for carry-out or delivery, the pizza is uncut, as this prevents moisture from the sauce and toppings from soaking into the crust, causing the pie to become soggy. 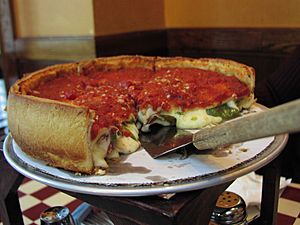 By the mid-1970s, two Chicago chains, Nancy's Pizza, founded by Rocco Palese, and Giordano's Pizzeria, operated by brothers Efren and Joseph Boglio, began experimenting with deep-dish pizza and created the stuffed pizza. Palese based his creation on his mother's recipe for scarciedda, an Italian Easter pie from his hometown of Potenza. Chicago Magazine articles featuring Nancy's Pizza and Giordano's stuffed pizza popularized the dish.

Stuffed pizzas are often even deeper than deep-dish pizzas, but otherwise, it can be hard to see the difference until it is cut into.

A stuffed pizza generally has much deeper topping density than any other type of pizza. As with deep-dish pizza, a deep layer of dough forms a bowl in a high-sided pan and the toppings and cheese are added. Then, an additional layer of dough goes on top and is pressed to the sides of the crust. At this stage, the thin dough top has a rounded, domed appearance.

Pizza makers often poke a small hole in the top of the "lid" to allow air and steam to escape while cooking, primarily so that the pizza does not explode. Usually, but not always, tomato sauce is ladled over the top crust before the pizza is baked. 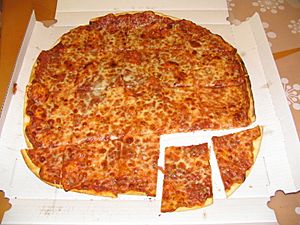 There is also a style of thin-crust pizza found in Chicago and throughout the rest of the Midwest. The crust is thin and firm enough to have a noticeable crunch, unlike a New York-style pizza.

This pizza is cut into squares, also known as "tavern-style" or "party cut", as opposed to wedges.

All content from Kiddle encyclopedia articles (including the article images and facts) can be freely used under Attribution-ShareAlike license, unless stated otherwise. Cite this article:
Chicago-style pizza Facts for Kids. Kiddle Encyclopedia.