Western Springs is a village located in Cook County, Illinois, United States and is a suburb of Chicago. As of the 2010 census, the village had a total population of 12,975. It is twinned with Rugeley, United Kingdom.

In November, 2007, BusinessWeek.com listed Western Springs second in a list of the 50 best places to raise children. The rankings were based on five factors, including school test scores, cost of living, recreational and cultural activities, number of schools and risk of crime. Western Springs ranked behind Groesbeck, Ohio.

Around the turn of the 18th century, nomadic Potawatomi Native Americans settled in the Western Springs area. It is unclear whether they built a village, but evidence of temporary campsites has been found near Flagg Creek in Forest Hills. The natives were gone by the end of 1835, but Potawatomi artifacts may still be found buried in the Springdale neighborhood. The last Cook County campground of the Potawatomi was within what is now the Timber Trails subdivision.

The first known settler in the area near Western Springs was Elijah Wentworth. By 1834, after the Black Hawk War, farmer Joseph Vial had moved from New York and built a cabin along what is now Plainfield Road, an ex-Native American trail in the south of Western Springs. This cabin served as a stagecoach station, hotel, general store, and post office for the entire area.

The CB&Q Railroad built a line through Western Springs in 1863, filling in much of the west-side swamp in the process. In 1870 the Western Springs Land Association, consisting of promoter Thomas Clarkson Hill, William Page, and two sons of Phillip F. W. Peck, bought the three tracts that make up the area for $105,000.

A large number of early residents were Quakers, and deeds often prohibited the sale of alcohol. In 1872 Hill moved to the area from Chicago, and the community began organizing to attract more commuters. Residents built a wooden schoolhouse (1872) and a post office (1873). Over time, with increased commuter settlement, Western Springs came to look less and less Quaker.

In 1885 the Grand Avenue School replaced the wooden schoolhouse, and the office of village marshal was created as a combination policeman, dogcatcher, and groundskeeper. In 1886 the Friend's Church (razed in 1958) was built on the corner of Walnut and Woodland. That same year Western Springs incorporated as a village by a public vote of 34 to 25. The voting townspeople elected a prominent Quaker developer, T. C. Hill, as the town's first president.

After the spring dried up in 1890, the village hired engineers Edgar and Benezette Williams to build the village waterworks system, including the famous water tower. Constructed using Naperville stone, the tower stood 112 feet (34 m) high. Replaced in 1962, it became a museum in 1970 and entered the National Register of Historic Places in 1981.

Like many western suburbs, a number of Western Springs' older homes have been renovated or replaced with more expensive housing, upsetting a multitude of residents.

Until recently, the village has not permitted the sale of alcoholic beverages. Currently, a number of establishments sell alcohol, including Paul Virant's Vie, and Hillgrove Tap on the corner of Wolf Road and Hillgrove Avenue.

There were 4,318 households out of which 42.8% had children under the age of 18 living with them, 76.1% were married couples living together, 5.8% had a female householder with no husband present, and 16.3% were non-families. 15.0% of all households were made up of individuals and 8.5% had someone living alone who was 65 years of age or older. The average household size was 2.89 and the average family size was 3.23. 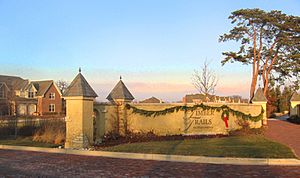 The western entrance of the Timber Trails subdivision. The annexation of the former Timber Trails golf course in 2005 was a contentious issue for this tranquil suburb.

One major highway traverses Western Springs: Ogden Avenue (U.S. Route 34) runs east-west along the northern border. U.S. 34 intersects with the Tri-State Tollway (I-294) on the western border. The main north-south street in the village is Wolf Road, designated as a Blue Star Memorial Highway.

The BNSF Railway runs through Western Springs. Daily commuter service on that line, connecting Aurora and Chicago, is provided by Metra. Freight rail traffic on the line is heavy, with BNSF operating freight trains on all three mainline routes through the village. During non-rush hours, a freight train may run along the line as frequently as once every ten minutes on average. Amtrak also runs this subdivision with passenger trains such as the Southwest Chief and the Illinois Zephyr. All told, the BNSF and Amtrak run up to 130 trains a day through Western Springs: 8 Amtrak trains in both directions, 96 Metra trains from morning to midnight, and around 25 or more freight trains. Sometimes around 145 trains can come through. An average BNSF train contains from 100 to about 125 cars, mainly consisting of coal, and intermodal trains. METRA runs anywhere from 5-11 cars per train, with the average being 6 cars.

A new train station was built in 2004-2005, and the north platform was remodeled in 2008. The new station is a virtual replica of a train station that was demolished in 1972. Passenger airline service is available at O'Hare and Midway airports, both located in Chicago. Commuter bus service is provided by Pace, the suburban bus division of the Regional Transportation Authority. 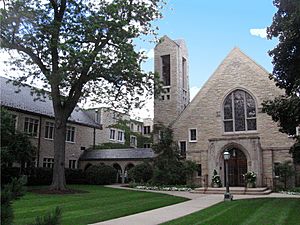 Western Spring's First Congregational Church is on the National Register of Historic Places.

The Western Springs Service Club (WSSC) is Western Spring's private pool. The pool was formed in 1954 and officially opened in 1955. There was an addition made in 1965 and a renovation in 1996. The WSSC provides recreational swimming, swim team for ages 6 to 18, water aerobics, lap swimming, and swim lessons for those who are members to the Service Club. On top of the infant pool, two swimming pools with slides and a diving board, the WSSC also includes a grass volleyball court and a Gaga pit. The facility also provides an outdoor snack shop and locker rooms. The property may also be used for birthday parties, relaxation, picnics, or meetings.

Western Springs has a public library, Thomas Ford Memorial Library. The library building at 800 Chestnut St. opened in 1932. Additions to the building were completed in 1962 and 1996. The library serves both children and adults and is part of the suburban library system. Patrons have access to programs such as story hour, book and film groups.

Western Springs includes two recreational centers. The Recreation Center, and the Grand Avenue Community Center are both located about four blocks away from downtown Western Springs. These recreation centers provides all sorts of classes, sports, events, and activities for anyone who so desires to be active citizens.

All content from Kiddle encyclopedia articles (including the article images and facts) can be freely used under Attribution-ShareAlike license, unless stated otherwise. Cite this article:
Western Springs, Illinois Facts for Kids. Kiddle Encyclopedia.