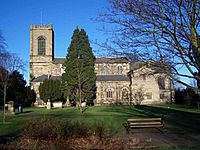 Rugeley is an historic market town in the county of Staffordshire, England. It lies on the north-eastern edge of Cannock Chase next to the River Trent, and is situated between the towns of Stafford, Cannock, Lichfield and Uttoxeter. The population at the 2001 census was 22,724, (including the Brereton and Etchinghill wards). increasing to 24,033 at the 2011 Census.

Rugeley is twinned with Western Springs, Illinois, a suburb of Chicago in the United States and Blyth in Northumberland, UK.

The town, historically known as Rudgeley or Ridgeley, is listed in the Domesday Book. This name is thought to be derived from 'Ridge lee', or 'the hill over the field'. In the mediaeval period, it thrived on iron workings and was also a site of glass manufacturing. During the Industrial Revolution the economy of Rugeley benefited from the construction of the Trent and Mersey Canal and then from it becoming a junction on the railway network.

Although smaller pits had existed beforehand, the town became a centre of industrial scale deep shaft coal mining from the 1950s, taking advantage of the geological faults that cause coal seams under Cannock Chase. The Lea Hall Colliery that opened in July 1960 was the first modern coal mine opened by the National Coal Board, which managed the United Kingdom's nationalized coal industry. Nearby the Central Electricity Generating Board built two power plants. With the construction of Rugeley A and B power stations Rugeley became a major centre for electricity generation. These developments led to the town growing very quickly in the 1960s. The Rugeley A power station was designed to take its fuel directly from Lea Hall by conveyor belt (although the coal was of poor quality not suitable for Rugeley B). This was the first such arrangement in Britain. The Rugeley B coal-fired power station continues to dominate the skyline where a flue gas desulphurisation plant has been constructed. This will allow it to continue to generate electricity and comply with environmental legislation.

St. Augustine's Church in Rugeley has memorials to the Levett family, who live at nearby Milford Hall and who established the Rugeley Home and Cottage Hospital on Church Street in 1866.

For many years in the 1970s and 1980s Rugeley was served by British Rail, with four services each way to and from Stafford and Rugby/Coventry. After the closure of Rugeley A power station and Lea Hall Colliery and a reduction in rail freight, it became possible to open up the Rugeley to Walsall line for passenger traffic. Rugeley now has two railway stations Rugeley Trent Valley and Rugeley Town. Rugeley Trent Valley lies on the West Coast Main Line, and has a regular hourly service to London via Lichfield, Nuneaton, Rugby and Milton Keynes, and to Crewe via Stafford and Stoke-on-Trent. Rugeley Trent Valley also has an hourly service via Rugeley Town railway station and the Chase Line suburban route connecting to Cannock, Walsall and Birmingham.

The major roads into Rugeley are the A460 from Cannock, and the A51 Lichfield to Stone. A new eastern bypass was opened in 2007 to facilitate the development of new employment areas on the former colliery site, and to reduce congestion in the town centre.

Rugeley is a mixed community in terms of age groups and household incomes, but in terms of racial mix it remains a very white/caucasian town. Much of the ageing population and their families are linked to the ex-mining communities, with an increasing proportion of the younger population being new to the area and associated with the services sector. As former mining towns, Rugeley and neighbouring Brereton suffer from a moderate level of social deprivation, with parts of the town consisting of council or ex-council house stock (such as the Springfield Estate and parts of Brereton) or former National Coal Board housing, such as the Pear Tree Estate. However, on the fringes of Rugeley there is more affluence, particularly in some of the areas bordering Cannock Chase, some of the older Georgian streets including the conservation area of Crossley Stone or waterfront properties along the Trent and Mersey Canal. A number of new houses were built in the housing boom of the early 2000s, providing a mixture of affordable and higher-end properties.

Rugeley has a modern swimming pool and leisure centre, opened 2006 on Burnthill Lane. Rugeley has a skate park in Hagley Park. Schools in the area include The Hart School (formerly two separate schools - Fair Oak Academy and Hagley Park Academy).

Rugeley's town centre has an outdoor market three days per week on Tuesdays, Thursdays and Saturdays. It also has an indoor market and a shopping centre called the Brewery Street Arcade. Rugeley has a number of well known high street names like Boots, Argos, Greggs and Morrisons.

Residents of the town benefit from their proximity to Cannock Chase and indeed there is a heritage trail funded by the National Lottery linking the town to Hednesford and Cannock with excellent disabled access. The trail contains numerous notice boards highlighting the town's history.

Rugeley also has a state-of-the-art health centre off Sandy Lane, a replacement for its predecessor on Horsefair. A modern care home now stands on the site of the former surgery. Technically, two separate surgeries coexist there. There is also the Aelfgar Surgery in Taylors Lane.

Rugeley Rose Theatre is a theatre and community centre in Taylors Lane.

Heron Court Hall, is a gothic style mansion (built by Joseph Whitgreave in 1851) on the outskirts of Rugeley town centre. It is a former convent and private residence and is now owned by Rugeley Snooker Club (also known as Rugeley Billiards Club). It is home to both Rugeley Snooker Club and Rugeley Poker Club, and a number of local businesses, including Abbeysound, a recording studio, and Securican. Rugeley Snooker Club has three full size snooker tables maintained to the highest standards, and in addition to serving its members, regularly plays host to other clubs from local snooker leagues.

The Lea Hall Social Club, which underwent extensive renovation between 2005 and 2011, serves Rugeley residents with a variety of facilities including cricket and football pitches, tennis courts and a crown bowling green.

A charter fair occurs during the first weekend in June, which is a huge attraction with most people from the town joining in the street parade. The town council also puts on a fireworks display during the last weekend of the school summer holidays, known as "Back to School with a Bang". A Christmas lights switch-on during December includes a market and late night opening of shops, with the local traders association joining in the organising of street entertainment.

Rugeley suffered an increase in unemployment when Lea Hall Colliery closed in 1990. Following many years of demolition and regeneration, a number of large industrial units have been built on the Towers Business Park, a brownfield site situated on the former ground of the colliery. In August 2011, Amazon.co.uk opened a 700,000 sq ft fulfillment centre on the Towers Park, creating between 700 and 900 full-time jobs as well as generating a large pool of seasonal work around Christmas.

All content from Kiddle encyclopedia articles (including the article images and facts) can be freely used under Attribution-ShareAlike license, unless stated otherwise. Cite this article:
Rugeley Facts for Kids. Kiddle Encyclopedia.