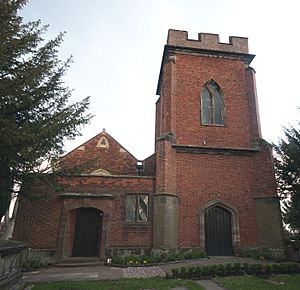 Burntwood is a former mining town and civil parish in the Lichfield District in Staffordshire, England, approximately 4 miles (6 km) west of Lichfield and north east of Brownhills. The town had a population of 26,049 and forms part of Lichfield district. The town forms one of the largest urbanised parishes in England. Samuel Johnson opened an academy in nearby Edial in 1736. The town is home to the smallest park (opened by Prince Albert of Wales in 2012) the UK, Prince's Park, which is located next to Christ Church on the junction of Farewell Lane and Church Road. The town expanded in the nineteenth century around the coal mining industry. 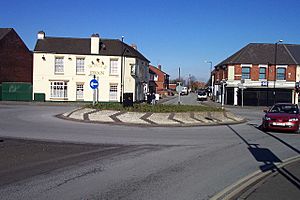 In July 2009 a Burntwood man, Terry Herbert, discovered a hoard of Saxon treasure with a metal detector in a field in the adjoining village of Hammerwich. Known as the Staffordshire Hoard, it is the largest hoard of Anglo-Saxon gold yet found. 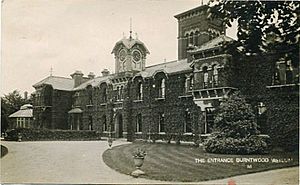 Both high schools fell victim to arson attacks in 2002. Most of Chase Terrace was destroyed in August 2002. While Chasetown Specialist Sports College lost its gym facility in December 2002. Both buildings have been rebuilt and refurbished.

Burntwood - along with Chasetown - has bus connections 60, 61 and 62 to Cannock, Rugeley and Lichfield operated by D&G Bus Chaserider. National Express West Midlands operate service 8 to Lichfield also linking Brownhills and Walsall. The 937 service, which runs to Birmingham, is an extension from the usual terminus of Brownhills West and runs only at around 6am and runs back to Burntwood at 6pm weekdays.

Arriva Midlands was the former operator of most bus routes around Burntwood before being taken over by D&G Bus in January 2021, now operating under Chaserider which is a subsidiary of D&G.

There are no railway connections in Burntwood. The nearest railway stations are Lichfield, Hednesford and Cannock, of which Lichfield is the closest.

Burntwood was served by the South Staffordshire Line which had a station in Hammerwich. There were many mineral lines in Burntwood which connected to Chasewater collieries as well as Angelsea Sidings. There is a heritage railway called the Chasewater Railway which is nearby with stops at Chasetown (Church Street) and Chasewater Heaths. In 2015, Lichfield District Council released a transport plan for Burntwood mentioning that if the line reopens to passenger services, there could be a chance of a new station to serve the town.

All content from Kiddle encyclopedia articles (including the article images and facts) can be freely used under Attribution-ShareAlike license, unless stated otherwise. Cite this article:
Burntwood Facts for Kids. Kiddle Encyclopedia.