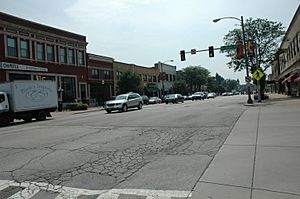 The downtown district of La Grange

The area around La Grange was first settled in the 1830s, when Chicago residents moved out to the west due to the rapid population increase in the city in the decade since its incorporation. The first settler, Robert Leitch, came to the area in 1830, seven years before the City of Chicago was incorporated. La Grange's location, at approximately 13 miles (21 km) from the Chicago Loop, is not considered far from the city by today's standards, but in that time the residents enjoyed the peace of rural life without much communication with urban residents.

The village was officially incorporated on June 11, 1879. It was founded by Franklin Dwight Cossitt, who was born in Granby, Connecticut, and raised in Tennessee, and moved to Chicago in 1862 where he built a successful wholesale grocery business.

In 1870, Cossitt purchased several hundred acres of farmland in Lyons Township, along the Chicago-Dixon Road, known today as Ogden Avenue (U.S. Highway 34). Ogden Avenue, on the site of a defunct Native American trail, was also referred to as the "Old Plank Road". Planks were often stolen by settlers to be used as building material, which made traveling very bumpy. When the Chicago, Burlington & Quincy Railroad came to town, La Grange was a milk stop called Hazel Glen. A few miles to the south, through present-day Willow Springs, the Illinois and Michigan Canal had emerged as a major shipping corridor, connecting Chicago and the Great Lakes with the Illinois and Mississippi rivers.

Cossitt set out to build the ideal suburban village - laying out streets, planting trees, donating property for churches and schools, and building quality homes for sale. He also placed liquor restrictions in the land deeds he sold to prevent the village from becoming a saloon town.

When Cossitt began his development, the area was served by a post office known as Kensington. But upon learning of another community already with that name in Illinois, Cossitt decided to name his town in honor of La Grange, Tennessee, where he had been raised as a youth on an uncle's cotton farm. However, today Kensington remains the name of one of the village's major avenues.

After the Great Chicago Fire of 1871 destroyed much of that city, thousands of its citizens sought new homes and opportunities far from the city's ills but within a convenient commute. La Grange was ideally situated to accommodate them.

According to the 2010 census, La Grange has a total area of 2.52 square miles (6.53 km2), all land. Two major railroad tracks run through the village, including the Burlington Northern Santa Fe, and the CSX/Indiana Harbor Belt lines.

Some 14,000 years ago, the land under La Grange sat on the western shore of Lake Chicago, predecessor to Lake Michigan. The prehistoric shoreline today is delineated by Bluff Avenue, a north-south street on the village's east side.

There were 5,624 households out of which 37.9% had children under the age of 18 living with them, 60.3% were married couples living together, 9.2% had a female householder with no husband present, and 28.0% were non-families. 24.5% of all households were made up of individuals and 9.7% had someone living alone who was 65 years of age or older. The average household size was 2.67 and the average family size was 3.23.

A few homes in town were designed by Frank Lloyd Wright. There is even a "bootleg" house, one he designed on the side, contrary to his employment agreement, when he was supposed to be working exclusively for architect Louis Sullivan. Wright was reportedly fired over this and similar employment agreement infractions.

All content from Kiddle encyclopedia articles (including the article images and facts) can be freely used under Attribution-ShareAlike license, unless stated otherwise. Cite this article:
La Grange, Illinois Facts for Kids. Kiddle Encyclopedia.