Beanie Babies are a line of stuffed toys created by American businessman H. Ty Warner, who founded Ty Inc. in 1986. Notably, the toys are stuffed with plastic pellets ("beans") rather than conventional soft stuffing. The toys come in many different forms, mostly animals.

Although created in 1993, Beanie Babies emerged as a major fad and collectible during the last half of the 1990s. They have been cited as being the world's first Internet sensation in 1995. They were collected not only as toys, but also as a financial investment, due to the high resale value of particular ones.

Beanie Babies are deliberately under-stuffed. This led to a criticism that the toys looked "cheap"; however, this set them apart from most stuffed animals on the market which could not be posed easily. Ty Warner has said that this understuffing method made the toys look "real".

Another important design element is the tag. Since the beginning, Beanie Babies have included two tags for identification: a heart-shaped "swing tag" at the top, and a fabric "tush tag" at the bottom. Both tags have been redesigned completely over time. Between 1994 and 1996, the swing tags had "To" and "From" blanks in them for use as gifts. Starting in early 1996, the tags include four-line poems related to the Beanie Baby, and a date of birth for the toy. The poem and birthday concept was created by Lina Trivedi who is credited as authoring the poems on the first 136 Beanie Babies that were introduced to the marketplace.

It was not uncommon for Beanie Babies to be accidentally shipped out with incorrect or misspelled tags, which sometimes increased the toy's value. On occasion, the poems, birth dates and even the names have been changed on certain Beanie Babies.

Beanie Babies began to emerge as popular collectibles in late 1995, and became a hot toy. The company's strategy of deliberate scarcity, producing each new design in limited quantity, restricting individual store shipments to limited numbers of each design and regularly retiring designs, created a huge secondary market for the toys and increased their popularity and value as a collectible.

Ty systematically retired various designs, and many people assumed that all "retired" designs would rise in value the way that early retirees had. The craze lasted through 1999 and slowly declined after the Ty company announced that they would no longer be making Beanie Babies and made a bear called "The End". Some time after the original announcement that the company would stop production, Ty asked the public to vote on whether the product should continue; fans and collectors voted "overwhelmingly" to keep the toys on the market.

At its height of popularity people would flip Beanies at as much as ten-fold on eBay. Indeed, at the height, Beanies made up 10% of eBay's sales. Some collectors insured their purchases for thousands of dollars.

Following are key factors that contributed to the collectible nature of Beanie Babies:

Warner was keenly aware that the Beanie Babies bubble could burst and eventually started requiring retailers who sold Beanies to also stock other product lines by his company if they wished to continue selling Beanies. None of these lines did as well as Beanie Babies, although they kept the company alive after the fad ended and eventually some became successful in their own right.

Ty, Inc. was the first business to produce a business to consumer website designed to engage their market. This is a major contributing factor to the early and rapidly growing popularity of Beanie Babies. By the time the first iteration of the Ty Web site was published in late 1995, only 1.4% of Americans were using the Internet. In tandem with the launch of the Ty Website, all Beanie Baby hangtags had the Ty Website URL and a call to action printed underneath the poems and birthdays that commanded audiences to visit the company website with text that read: Visit our web page!!! As a result, hordes of consumers were visiting the Ty website to gain information about Beanie Babies which was unprecedented. Ty is the first business to leverage their website to connect and engage with consumers of their products. This effort evolved into the world's first Internet sensation.

Diana, Princess of Wales died on August 31, 1997. Warner announced the lavender Beanie Baby bear Princess on October 29, 1997 in honor of Princess Diana. Warner said that all proceeds would be donated to the Diana, Princess of Wales Memorial Fund. The Princess Diana Beanie Baby bear was sent to vendors to distribute in the second week of December 1997. Some vendors had to wait until February 1998. Only 12 Beanie Baby Princess bears were released to each vendor initially, but this changed due to strong demand. The first shipments are easily identified as "PVC Princess Bears" due to the tush tag stating "P.V.C. Pellets". The second shipment was during the switch to "P.E. Pellets" on the tag in 1998 and are very common. The bears were made in both China and Indonesia.

Decade the bear was made in honor of Beanie Babies' 10th anniversary. Decade bears were made in white, royal blue, red, purple, orange, hot pink, green, gold, brown, and light blue. Most Decade bears have silver sparkles on their bodies. It was made in 2003.

Originally named Tabasco, after Tabasco sauce, the name was changed to Snort to avoid trademark infringement. Tabasco has all-red "feet", while Snort has all-white ones. The poem stayed the same and is a reference to the Chicago Bulls basketball franchise:

"Although Snort is not so tall He loves to play basketball He is a star player in his dream Can you guess his favorite team?"

Tremor was the first beanie to be sent into space on 30 May 2020 as part of the Crew Dragon Demo-2 mission. 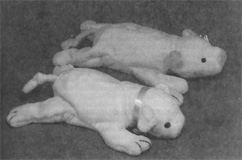 Counterfeit Beanie Babies began to surface in 1997. Early on, cheap knock-offs and fakes of common Beanies were widely available at discount prices.

During the wake of Beanie Babies' success, Beanie Baby-centric publications were issued. One of the largest was Mary Beth's Bean Bag World, a monthly magazine dedicated to Beanie Babies and competing plush toys. This magazine ran from 1997 to 2001.

All content from Kiddle encyclopedia articles (including the article images and facts) can be freely used under Attribution-ShareAlike license, unless stated otherwise. Cite this article:
Beanie Babies Facts for Kids. Kiddle Encyclopedia.