The area known as Westmont was inhabited by the Potawatami until the year 1833. After several failed attempts by the U.S. government to persuade the Native Americans to move from the area, in 1833, the Native Americans agreed under coercion to vacate their land for nominal payment.

The development of the Illinois-Michigan Canal, authorized by the State of Illinois in the 1820s but delayed in construction until the 1830s, contributed to Westmont's early growth. When the economic Panic of 1837 halted canal construction, many of the workers turned to farming, and agriculture became the major occupation, with produce sold in nearby Chicago. The area around Westmont became one of the most prosperous sections of the state.

In order to transport agricultural products into the city of Chicago, construction of a plank road originating in Chicago began in 1840. The plank road was placed over the nine-mile (14 km) swamp separating Chicago and the area that became Westmont, and reached Naperville, Illinois by 1851. Today, this roadway is known as Ogden Avenue (U.S. Route 34).

The plank road soon became inadequate; in 1858, local incorporated towns and villages petitioned the Chicago, Burlington and Quincy Railroad to build a branch line from Chicago to Aurora, Illinois that would pass through their towns. The railroad line was approved, with the first train in 1864. "Greg’s Station," from which Westmont developed, was a stop to load agricultural and dairy products. The town transitioned gradually from an agricultural community to a commuter community, with the early growth and development centered around the railroad station.

In the early 1900s, plats for the Village of Westmont were laid out and roads were dedicated; incorporation, decided by only a narrow margin, followed in 1921. Westmont was officially incorporated on November 10, 1921; Vince Pastor served as the first president of the Village Board. 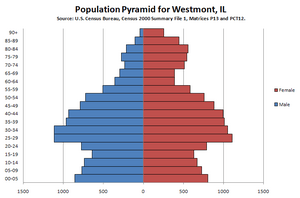 There were 9,900 households; 29.1% of these households had children under the age of 18 living with them. 47.1% were married couples living together, 10.4% had a female householder with no husband present, and 39.6% were non-families. 32.5% of all households were made up of individuals and 11.8% had someone living alone who was 65 years of age or older. The average household size was 2.37 and the average family size was 3.05.

Westmont has a Westmont Metra station on Metra's BNSF Railway Line, which provides daily rail service between Aurora, Illinois and Chicago, Illinois (at Union Station). U.S. Route 34, Interstate 88 located north of the Village, Interstate 55 to the South, Interstate 294 to the East and Interstate 355 to the West, provide access to the rest of the Chicago Region.

All content from Kiddle encyclopedia articles (including the article images and facts) can be freely used under Attribution-ShareAlike license, unless stated otherwise. Cite this article:
Westmont, Illinois Facts for Kids. Kiddle Encyclopedia.