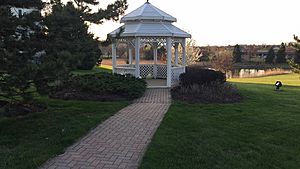 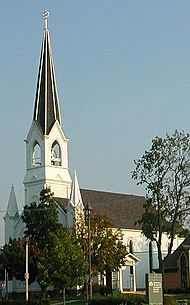 Originally part of Potawatomi Native American landscape, the Lombard area was first settled by Americans of European descent in the 1830s. Lombard shares its early history with Glen Ellyn. Brothers Ralph and Morgan Babcock settled in a grove of trees along the DuPage River. In what was known as Babcock's Grove, Lombard developed to the east and Glen Ellyn to the west. In 1837, Babcock's Grove was connected to Chicago by a stagecoach line which stopped at Stacy's Tavern at Geneva and St. Charles Roads. Fertile land, the DuPage River, and plentiful timber drew farmers to the area.

Sheldon and Harriet Peck moved from Onondaga, New York, to this area in 1837 to farm 80 acres (320,000 m2) of land. In addition, Peck was an artist and primitive portrait painter who traveled to clients across northeastern Illinois. The Peck house also served as the area's first school and has been restored by the Lombard Historical Society. In 2011, the Peck House was inducted into the National Park Service's Network to Freedom—a list of verified Underground Railroad locations.

The 1848 arrival of the Galena and Chicago Union Railroad provided local farmers and merchants rail access to Chicago, and commercial buildings soon sprang up around the train station. Lombard was officially incorporated in 1869, named after Chicago banker and real estate developer Josia Lewis Lombard.

On April 6, 1891, Ellen A. Martin led a group of women to the voting place at the general store. She demanded that the three male election judges allow the women to vote. The judges were so surprised that one of them had a "spasm," one leaned against the wall for support, and the other fell backwards into a barrel of flour! They did not want to let the women vote, so a county judge was asked to decide. He agreed that the women were right. Ellen Martin then became the first woman in Illinois to vote. In 1916 Illinois women could vote in national elections, but the 19th Amendment (the Women's Suffrage Amendment) was not passed until 1920. In 2008, the city of Lombard, Illinois declared April 6 to be "Ellen Martin Day" in commemoration of Ms. Martin's historic victory for women's suffrage.

William LeRoy built a home in the Italianate style on Lombard's Main Street in 1881. LeRoy specialized in making artificial limbs for civil war veterans and lived in this house until 1900. The house would eventually become the home of Harold Gray's parents and the studio of Harold Gray, the originator of Little Orphan Annie cartoon strip. Harold Gray used the home's study to work on the Annie cartoons, and some features of the house are drawn into some of his cartoons, such as the grand staircase and the outer deck. Later, he remarried and moved to the east coast. Harold Gray was a charter member of Lombard Masonic Lodge #1098, A.F. & A.M. in 1923.

In 1927 the estate of Colonel William Plum, a local resident, was bequeathed to the village. The Plum property included his home, which became the Helen M. Plum Memorial Library, and a large garden containing 200 varieties of lilac bushes. This garden became a public park, Lilacia Park.

Since 1930, Lombard has hosted an annual Lilac Festival and parade in May. "Lilac Time in Lombard," is a 16-day festival ending in mid-May. It starts with the Lilac Queen coronation and her court. Many lilac themed events take place, including concerts, a Mothers' Day Brunch, an arts and crafts fair, and tours of the park. The grand finale is Lombard's Lilac Festival Parade. The first Lilac Princess in 1930 was Adeline Fleege, whose later married name was Gerzan.

There were 16,487 households out of which 29.8% had children under the age of 18 living with them, 53.9% were married couples living together, 7.9% had a female householder with no husband present, and 35.0% were non-families. 28.7% of all households were made up of individuals and 10.3% had someone living alone who was 65 years of age or older. The average household size was 2.49 and the average family size was 3.13. 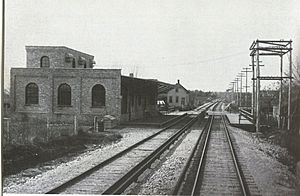 The former train station for the Chicago Aurora and Elgin Railroad, pictured in 1902.

Lombard is served by Metra's Union Pacific/West Line, which runs from the Ogilvie Transportation Center out to Elburn, Illinois over the old Chicago and Northwestern Railway trackage. Lombard's also served by I-88 / Illinois 110 and I-355 as well as Illinois Routes 38, 53, 56, and 64.

Formerly, it was also served by trains of the Chicago Aurora and Elgin Railroad and the Chicago Great Western Railway.

All content from Kiddle encyclopedia articles (including the article images and facts) can be freely used under Attribution-ShareAlike license, unless stated otherwise. Cite this article:
Lombard, Illinois Facts for Kids. Kiddle Encyclopedia.