Glen Ellyn is an affluent, suburban village in DuPage County, Illinois, United States. As of the 2010 Census, the village population was 27,450. 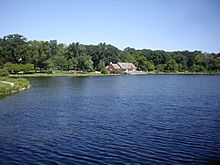 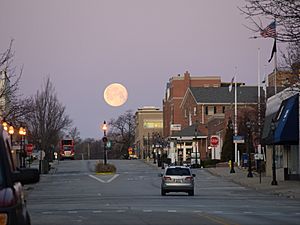 The first landowner in Glen Ellyn was Deacon Winslow Churchill. He and his family moved to Glen Ellyn from New York in 1834. Other newcomers to the area built town necessities such as a tavern and school.

Moses Stacy, a soldier in the War of 1812, arrived here in 1835. His inn, Stacy's Tavern, built in 1846 and his second home, was a halfway stop between Chicago and the Fox River Valley and a probable stop for Galena, Illinois stagecoaches on their way to Rockford, Illinois. Stacy's Tavern, now a historical monument, stands at what is now the intersection of Geneva Road and Main Street.

In 1849, construction of the Galena and Chicago Union Railroad through Glen Ellyn was finished. The area around the railroad became the center of the town. At first, trains running through the town on the railway did not stop there. A local man named Lewey Q. Newton made an offer to the railroad company: Newton would build a depot and water tank out of his own pocket if the railroad would require trains to stop there. The depot that Newton built became known as Newtown Station.

The first church, a Congregational church, was built in 1862. Many Protestant churches were built in the village in the years to come. It wasn't until 60 years later that the first Catholic church was built.

In 1889, residents Thomas E. Hill and Philo Stacy spearheaded a project to create a new lake, called Lake Glen Ellyn, by having a dam built in a nearby stream. In 1890, residents discovered mineral springs near the village.

In 1891, Glen Ellyn, advertised as Chicago's newest suburb and health resort, became the village's official name; it was incorporated on May 10, 1892. The large Lake Glen Ellyn Hotel opened in 1892, the same year much of the business district was destroyed by fire. Fourteen years later, the hotel was struck by lightning and burned to the ground.

By World War I, Glen Oak Country Club served the Oak Park and Glen Ellyn communities, and in 1922 the first Glenbard high school was built.

The town went through several names, including Babcock's Grove (named for three brothers that settled there), DuPage Center, Stacy's Corners (after the Stacy family), Newton's Station, Danby (after Danby, Vermont, a local landowner's birthplace), Prospect Park, and finally Glen Ellyn. The name Glen Ellyn is based on the Welsh version of the name of the then–village president Thomas E. Hill's wife Ellen, preceded by glen, referring to the local geography.

There were 10,207 households, of which 36.7% had children under the age of 18 living with them. Additionally, 61.0% of households were married couples living together, 6.8% had a female householder with no husband present, and 29.5% were non-families. Individuals accounted for 25.2% of all households, and 9.3% were people 65 years of age or older living alone. The average household size was 2.63 and the average family size was 3.21.

Between 1900 and 2000, the population grew significantly. Population figures:

Glen Ellyn is served by Pace bus routes 714, 715, and 301 passing through the village on Roosevelt Road.

The Illinois Prairie Path bicycle trail bisects the village and the Great Western Trail (Illinois) passes through the northern edge.

At the east end of the village, Roosevelt Road provides access onto Interstate 355.

Glen Ellyn is the setting for the novel The Girl Who Owned a City by O. T. Nelson. The protagonist lives in the Lake Ellyn area of the village. After a virus kills all adults on the planet, she, with several other children, moved into Glenbard West High School.

Glen Ellyn is the home of the fictional character Joe Patroni, the TWA engineer in the novel Airport and played by George Kennedy in the movie Airport.

All content from Kiddle encyclopedia articles (including the article images and facts) can be freely used under Attribution-ShareAlike license, unless stated otherwise. Cite this article:
Glen Ellyn, Illinois Facts for Kids. Kiddle Encyclopedia.