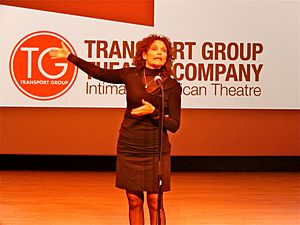 Mary Elizabeth Mastrantonio (November 17 1958) is an American actress. She first became well-known after playing Gina Montana in the 1983 movie Scarface. She also played Carmen in the 1986 movie The Color of Money. Her other movies include Robin Hood: Prince of Thieves (1991) and The Abyss (1989). Mastrantonio was born in Illinois.

All content from Kiddle encyclopedia articles (including the article images and facts) can be freely used under Attribution-ShareAlike license, unless stated otherwise. Cite this article:
Mary Elizabeth Mastrantonio Facts for Kids. Kiddle Encyclopedia.