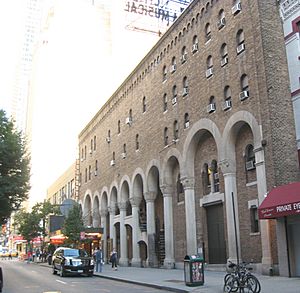 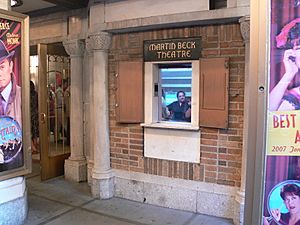 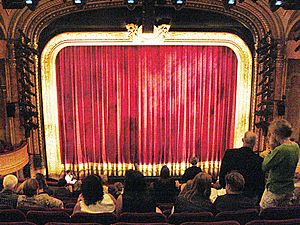 View to the stage. 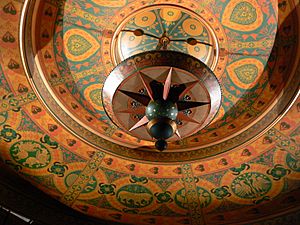 The Al Hirschfeld Theatre is a Broadway theatre located at 302 West 45th Street in Midtown Manhattan. The Hirschfeld is one of five theatres owned and operated by Jujamcyn Theaters and current president Jordan Roth. The theatre has a seating capacity of 1,424.

Designed by architect G. Albert Lansburgh for vaudeville promoter Martin Beck, the theatre opened as the Martin Beck Theatre with a production of Madame Pompadour on November 11, 1924. It was the only theatre in New York that was owned outright without a mortgage. It was designed to be the most opulent theatre of its time and has dressing rooms for 200 actors.

Famous appearances include Basil Rathbone as Romeo with Katharine Cornell as Juliet in December 1934; Burgess Meredith as Mio in Winterset in 1935; Richard Gere in Bent; Frank Langella in Dracula; Elizabeth Taylor in The Little Foxes; Christina Applegate as the title role in Sweet Charity; David Hyde Pierce as Lt. Coffi in the musical Curtains; and Daniel Radcliffe in the latest revival of How to Succeed in Business Without Really Trying.

Initially owned by the Beck Family, the theatre was purchased in 1965 by William L. McKnight of Jujamcyn Theaters. On June 21, 2003, it was renamed the Al Hirschfeld Theatre in honor of the caricaturist famous for his drawings of Broadway celebrities, and reopened on November 23, 2003, with a revival of the musical Wonderful Town.

In 2004, longtime president and producer of Jujamcyn, Rocco Landesman announced his plans to buy the five playhouses. In 2005, Jordan Roth joined Jujuamcyn as a resident producer, and in 2009 he acquired a 50% stake in the company. In 2009, Roth took over full operations when Landesman joined the National Endowments of the Arts. The Hirshfield is one of five theatres owned and operated by Jujamcyn Theaters.

Lansburgh designed the Hirschfeld in a Byzantine and Moorish architectural style. A large arcaded street front spanning the length of the facade reminiscent of a movie palace and a large marquee on the roof gives the theatre a distinctive look on the quieter, west of Eighth Avenue side of 45th Street. The auditorium seats the 1,424 patrons over two levels, with an extended sloping orchestra and mezzanine, all under an elaborate, colorful Moorish painted dome. Distinctive details such as single boxes, the large proscenium arch and ornate stained glass doors in the rear of the auditorium give the room character, leading to both the interior and exterior of the theatre designated New York City landmarks in 1987.

In late 2002, Jujamcyn Theaters announced that the Martin Beck Theatre would be renamed in June 2003 in honor of illustrator Al Hirschfeld, as Hirschfeld approached his 100th birthday. Jujamcyn President Rocco Landesman described the renaming as "an important event for the history and heritage of Broadway". Landesman stated that "No one working in our world is more deserving than Al Hirschfeld." Notably, Hirschfeld has become the only visual artist to have a Broadway theatre named after him. James H. Binger, Chairman of Jujamcyn, explained that because Hirschfeld "started working in New York only two years after the Martin Beck Theatre was built, it seems wholly appropriate that the building bears his name – they have shared the street during Broadway's golden age and beyond." To reflect how Hirschfeld's career spanned Martin Beck's years of operation, a gallery was installed in the mezzanine that features 22 reproductions of the artist's drawings portraying plays and actors who appeared at the theatre.

Although Hirschfeld died before the official renaming on June 23, 2003, he knew that he would be receiving the honor. A celebration and tribute to Hirschfeld were held on the evening of the renaming, featuring performers such as Carol Channing, Matthew Broderick, Barbara Cook, playwright Arthur Miller, and many other figures drawn by Hirschfeld during their careers. Hirschfeld's traditional aisle seat was left vacant in his honor during the presentation. The tribute opened with a screen projection of Hirschfeld's Self-Portrait As An Inkwell, in which the artist portrays himself in his creative process and showcases his distinctive use of crow quill pen and Higgins India Ink in his drawings.

The theatre constructed a new marquee to mark its renaming, featuring an illuminated version of Hirschfeld's Self-Portrait as an Inkwell. West 45th Street between Eighth and Ninth Avenues was closed to traffic for the unveiling of the new marquee. The marquee was initially installed with red neon representing the "ink", but blue neon was later substituted because some perceived the red as "macabre".

Moulin Rouge! achieved the box office record for the Al Hirschfeld Theatre. The production grossed $2,716,892 over nine performances, for the week ending December 29, 2019.

All content from Kiddle encyclopedia articles (including the article images and facts) can be freely used under Attribution-ShareAlike license, unless stated otherwise. Cite this article:
Al Hirschfeld Theatre Facts for Kids. Kiddle Encyclopedia.