Bartlett is a village located in Cook and DuPage counties, Illinois. A small parcel on the western border is in Kane County. The population was 41,208 at the 2010 census.

In its earliest times, the Village of Bartlett, Illinois was served as a hunting and camping ground for the Cherokee, Miami, Potawatomi, and Ottawa Indians. Throughout the past, the Northwest Territory, Virginia, Indiana, Spain, France and England had staked their claim for Bartlett. However, the territory was owned by a man named Luther Bartlett. Luther and Sophia Bartlett had decided that a station stop would be beneficial for their town and townspeople. In 1873, Bartlett gave a monetary contribution and half of his 40-acre woodlot towards the construction for a train depot, which is why the town is named after Luther Bartlett . A petition for incorporation was filed in Springfield on February 11, 1891. The village was incorporated on June 21, 1892.

Bartlett is located in Illinois and is a Northwest suburb of the city of Chicago.

There were 12,179 households out of which 48.6% had children under the age of 18 living with them, 72.5% were married couples living together, 7.0% had a female householder with no husband present, and 18.0% were non-families. 14.2% of all households were made up of individuals and 3.3% had someone living alone who was 65 years of age or older. The average household size was 3.00 and the average family size was 3.36.

In 2011 Bartlett had 5,918 Asian residents, more than twice the amount in 2001. Ashok Selvam of the Daily Herald of Arlington Heights, Illinois said that the Asian population growth "could be traced to construction of the BAPS Shri Swaminarayan Mandir". 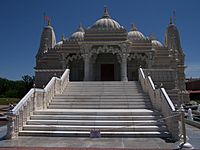 On August 8, 2004, the BAPS organization, a sect of Hinduism, opened BAPS Shri Swaminarayan Mandir, Chicago, a large 22,442-square-foot (2,084.9 m2) temple, or mandir, on Illinois Route 59, just south of U.S. Route 20. Covering 30 acres (120,000 m2), it is largest traditional Hindu mandir, of stone and marble, to be constructed in the United States. The mandir took 16 months to build and was constructed with Turkish limestone, Italian marble, and Indian makrana marble. The adjoining cultural center, known as the Haveli, was opened in October 2000. The large complex contains large rooms with intricately carved walls of stone and wood. It attracts many visitors of all faiths.[1]

All content from Kiddle encyclopedia articles (including the article images and facts) can be freely used under Attribution-ShareAlike license, unless stated otherwise. Cite this article:
Bartlett, Illinois Facts for Kids. Kiddle Encyclopedia.