The BAPS Shri Swaminarayan Mandir of Chicago, Illinois is a traditional Hindu place of worship built by the BAPS Swaminarayan Sanstha. The BAPS Swaminarayan Sanstha, which is headed by Mahant Swami Maharaj, is a denomination of the Swaminarayan branch of Hinduism. The mandir, located in the Chicago suburb of Bartlett, opened on 7 August 2004. It is built of hand-carved Italian marble and Turkish limestone. The mandir is the largest of its kind in Illinois and was constructed according to guidelines outlined in ancient Hindu texts of temple architecture. The complex spreads over 27 acres and, in addition to the mandir, includes a haveli, a small bookstore. The haveli is a cultural center in which weekly congregations are held. The mandir is open daily for worship and to visitors.

The temple, classified within traditional Hindu architecture as a ‘Shikharbadha mandir,’ has been built according to principles laid out in the Shilpa Shastras. The Shilpa Shastras are Hindu texts prescribing standards of sacred architecture. Within the mandir are different shrines, in which murtis (sacred images of Hindu deities) have been installed. The central shrine holds the murti of Swaminarayan, with Gunatitanand Swami to his left, together worshipped as Akshar-Purushottam Maharaj. Other shrines hold the murtis of Ghanshyam Maharaj, Harikrishna Maharaj, Shri Radha Krishna, Shri Shiva Parvati, Shri Sita Ram, Hanumanji, Ganapatiji and the lineage of BAPS gurus who are Swaminarayan's spiritual successors. The murtis become worthy of worship after being imbued with the living presence of the deities. Accordingly, the Swaminarayan swamis (Hindu monks) offer devotional worship to the deities throughout the day. The swamis awaken the deities before dawn by singing morning hymns, called prabhatiya. Mangala aarti, which is the first of five aartis, is also performed at this time. Aarti is a ritual where devotees sing the glory of God while a lighted wick is circulated before the murtis. After mangala aarti, the deities are bathed and offered food and garments that vary with the season. After the murtis have been adorned with garments, shangaar aarti is performed. At midday, rajabhoga aarti is performed and food is offered to the murtis. Food that has been offered to the deities is considered sanctified, and is distributed to devotees as holy prasadam. In the evening, sandhya aarti is performed before offering food to the murtis. The swamis put the murtis to rest by adorning them with night garments. Shayana aarti is performed at this time. Chamber doors are closed when food is being offered and when the murtis are put to rest.

The congregation gathers for weekly assemblies in the haveli. Devotional hymns are sung and spiritual discourses covering teachings in Hindu scriptures are conducted. In addition, there is a wide spectrum of activities for youths, such as Hinduism classes, Indian music classes and Gujarati language training. Further, leadership seminars and conferences held over school intersessions encourage youths to take an active role in their community and mandir activities. Youths get involved in the celebration of major Hindu festivals by helping organize the events and also singing devotional hymns, performing traditional dances and delivering spiritual discourses and speeches in the festival assemblies. Some of the major festivals celebrated annually include Ram Navmi, Janmashtami, Shivratri, Holi, Ganesh Chaturthi and Diwali. Marking the Hindu New Year, Diwali is one of the grandest Hindu festivals, and attracts many visitors and devotees to the mandir.

In 1972, at the behest of Pramukh Swami Maharaj, a small group of devotees in Chicago began gathering in homes to hold spiritual assemblies. The congregation grew following after several visits from Pramukh Swami Maharaj to Chicago in 1974, 1977 and 1980. The growing attendance necessitated a large permanent space. A building on a four-acre plot of land was acquired in Glen Ellyn, a suburb of Chicago. In 1984, Pramukh Swami installed murtis in the building and inaugurated the first Shri Swaminarayan Mandir in the Chicago area. Within several years, the congregation outgrew the mandir in Glen Ellyn. The land which is home to the current complex in Bartlett was purchased in 1994.

Construction of the complex took place over various phases, beginning with the haveli and culminating with the opening of the shikarbaddha mandir. The haveli was inaugurated on 29 October 2000 by Pramukh Swami Maharaj.

The limestone and marble stones for the Mandir were quarried from Turkey and Italy and shipped to Gujarat, India. From here, the stones were transported to Rajasthan where they were hewn and carved by 2000 craftsmen. In total, 70,000 cubic feet of stone was chiseled and shaped with intricate patterns and designs. Once the stones were sculpted, they were shipped to Chicago. In total, 40,000 pieces of stone were shipped to Chicago where they were fitted together like a 3D jigsaw puzzle. The entire complex is situated on 27 acres. The mandir exterior is Turkish limestone and the interior is Italian Carrara marble.

The mandir was constructed over 16 months and was officially inaugurated on 7 August 2004 by Pramukh Swami Maharaj. Congressman Henry Hyde and State Representative of Illinois John Miller were in attendance at the ceremony.

The mandir opening took place in the midst of a 16-day celebration, which also included a Vishvashanti Maha yagna (collective prayer for world peace) and a shobhyatra (colorful procession) through downtown Chicago.

Since 2008, the mandir has celebrated International Women's Day by hosting an annual conference. The conference's aims include empowering women and fostering spiritual growth. The theme for the conference held on 22 March 2014 was ‘Lead from Within.’ The program illustrated that true leadership is rooted in a person's character, actions and examples. 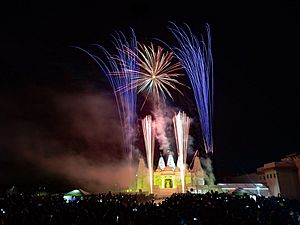 In 2013, the theme was “Timeless Traditions: Celebrate the Past and Cultivate the Future.” The conference focused on understanding and communicating Hindu traditions and preserving them in order to help nurture future generations.

On 6 April 2019, the mandir held the annual Women's Conference themed "Sādhanā: The Purpose and the Pursuit." The conference elaborated on how sadhana (spiritual practice) plays a role in maintaining strength and courage while navigating life experiences and events.

Alongside BAPS centers throughout North America, the BAPS mandir in Chicago holds an annual walkathon in which members of the congregation raise funds for charities in the community. For the past several years, funds raised from the BAPS walkathon in Chicago have benefited the American Cancer Society.

BAPS Charities is a global charity that works to provide service through health awareness, educational services, humanitarian relief, environmental protection and preservation and community empowerment. Annual health fairs are a key component of the health and wellness services BAPS Charities provides in Chicago. In 2013, the health fair was held in September. 90 physicians and 30 allied health professionals volunteered to provide medical care and awareness to 525 people. Various types of lab and diagnostic tests were conducted along with different levels of screening. These services are provided free of charge or for nominal fees. The health fairs help provide medical care and advice to underserved members of the community. 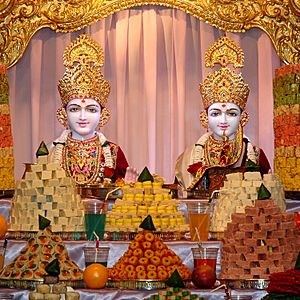 Diwali is one of many important festivals to worshiping Hindus. Diwali is also known as the Festival of Lights. Usually diyas (oil lamps) are lit in the home to drive away evil. People also celebrate with light shows and fireworks. BAPS Mandir in Chicago celebrates Diwali by lighting up the Mandir with many lights and also has a firework show that promptly follows the Diwali Maha Aarti. The day after Diwali is the Indian New Year. Many Hindus go to the temple on this day for blessings for the new year. BAPS celebrates this day with Annakut. Annakut means "mountain of food" and it represents the offering of food to god. Every year at BAPS thousands of vegetarian dishes are offered to the gods in return for their blessings. These offerings range from sweets to savory food items such as pizza. Along with Annakut, BAPS also does a New Year Aarti every hour inside the temple so that people visiting at the time can pray and receive blessings.

In 2004, the BAPS mandir complex was awarded the Chicago Building Congress Merit Award for its unique style of Indian stone architecture and engineering, as well as its positive cultural and spiritual impact on Bartlett. Also in 2005, the mandir was recognized in Stone World magazine as a true symbol of ancient heritage and craftsmanship of traditional Indian temples. The American Institute of Architects has recognized the mandir as one of the 150 Great Places in Illinois.

All content from Kiddle encyclopedia articles (including the article images and facts) can be freely used under Attribution-ShareAlike license, unless stated otherwise. Cite this article:
BAPS Shri Swaminarayan Mandir Chicago Facts for Kids. Kiddle Encyclopedia.