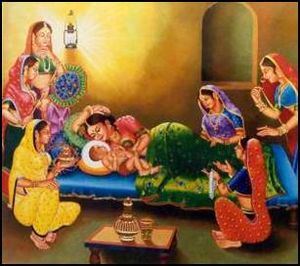 Swaminarayan (IAST: Svāmīnārāyaṇa, 3 April 1781 – 1 June 1830), also known as Sahajanand Swami, was a yogi and ascetic whose life and teachings brought a revival of central Hindu practices of dharma, ahimsa and brahmacarya. He is believed by followers to be a manifestation of God.

Swaminarayan was born Ghanshyam Pande in Chhapaiya, Uttar Pradesh, India in 1781. In 1792, he began a 7-year pilgrimage across India at the age of 11 years, adopting the name Nilkanth Varni. During this journey, he did welfare activities and after 9 years and 11 months of this journey, he settled in the modern-day Indian state of Gujarat around 1799. In 1800, he was initiated into the Uddhav sampradaya by his guru, Swami Ramanand, and was given the name Sahajanand Swami. In 1802, his guru handed over the leadership of the Uddhav Sampraday to him before his death. Sahajanand Swami held a gathering and taught the Swaminarayan Mantra. From this point onwards, he was known as Swaminarayan. The Uddhav Sampraday became known as the Swaminarayan Sampradaya.

Swaminarayan developed a good relationship with the British Raj. He had followers not only from Hindu denominations but also from Islam and Zoroastrianism. He built six temples in his lifetime and appointed 500 paramahamsas to spread his philosophy. In 1826, Swaminarayan wrote the Shikshapatri, a book of social principles. He died on 1 June 1830 and was cremated according to Hindu rites in Gadhada, Gujarat. Before his death, Swaminarayan appointed his adopted nephews as acharyas to head the two dioceses of Swaminarayan Sampradaya. Swaminarayan is also remembered within the sect for undertaking reforms for women and the poor, and performing non-violent yajñas (fire sacrifices) on a large scale.

All content from Kiddle encyclopedia articles (including the article images and facts) can be freely used under Attribution-ShareAlike license, unless stated otherwise. Cite this article:
Swaminarayan Facts for Kids. Kiddle Encyclopedia.