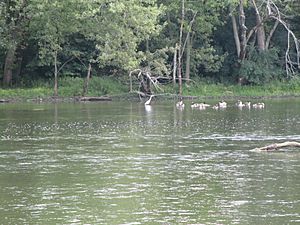 The Fox River has been of central significance to settlement and life in Batavia.

Batavia is a city mainly in Kane County and partly in DuPage County in the U.S. state of Illinois. A suburb of Chicago, it was founded in 1833 and is the oldest city in Kane County. As of the 2010 census, the city had a total population of 26,045, which was estimated to have increased to 26,420 by July 2019.

During the latter part of the 19th century, Batavia, home to six American-style windmill manufacturing companies, became known as "The Windmill City." Fermi National Accelerator Laboratory, a federal government-sponsored high-energy physics laboratory, where both the bottom quark and the top quark were first detected, is located just east of the city limits.

Batavia is part of a vernacular region known as the Tri-City area, along with St. Charles and Geneva, all western suburbs of similar size and relative socioeconomic condition.

Batavia was first settled in 1833 by Christopher Payne and his family. Originally called Big Woods for the wild growth throughout the settlement, the town was renamed by local judge and former Congressman Isaac Wilson in 1840 after his former home of Batavia, New York. Because Judge Wilson owned the majority of the town, he was given permission to rename the city.

Batavia's settlement was delayed one year by the Black Hawk War, in which Abraham Lincoln was a citizen soldier, and Zachary Taylor and Jefferson Davis were Army officers. Although there is no direct evidence that Lincoln, Taylor, or Davis visited the future site of Batavia, there are writings by Lincoln that refer to "Head of the Big Woods," which was Batavia's original name from its first settler, Christopher Payne. The city was incorporated on July 27, 1872.

After the death of her husband, Mary Todd Lincoln was an involuntary resident of the Batavia Institute on May 20, 1875. Mrs. Lincoln was released four months later on September 11, 1875. In the late 19th century, Batavia was a major manufacturer of the Conestoga wagons used in the country's westward expansion. Into the early 20th century, most of the windmill operated waterpumps in use throughout America's farms were made at one of the three windmill manufacturing companies in Batavia. Many of the original limestone buildings that were part of these factories are still in use today as government and commercial offices and storefronts. The Aurora Elgin and Chicago Railway constructed a power plant in southern Batavia and added a branch to the city in 1902. The Campana Factory was built in 1936 to manufacture cosmetics for The Campana Company, most notably Italian Balm, the nation's best-selling hand lotion at the time.

There were 8,494 households, out of which 41.7% had children under the age of 18 living with them, 63.0% were married couples living together, 7.8% had a female householder with no husband present, and 26.2% were non-families. 22.5% of all households were made up of individuals, and 9.7% had someone living alone who was 65 years of age or older. The average household size was 2.75 and the average family size was 3.27.

Batavia is an award winning community.

Aldi, Inc., the U.S. subsidiary of Aldi Süd, has its headquarters in Batavia.

Fermilab is located just outside the town borders and serves as employment for many of the town's residents.

According to the City's 2017 Comprehensive Annual Financial Report, the top employers in the city are:

All content from Kiddle encyclopedia articles (including the article images and facts) can be freely used under Attribution-ShareAlike license, unless stated otherwise. Cite this article:
Batavia, Illinois Facts for Kids. Kiddle Encyclopedia.