Geneva is a city in and the county seat of Kane County, Illinois, United States. It is located on the western side of the Chicago suburbs.

Geneva is part of a tri-city area, located between St. Charles and Batavia. As of a July 2011 official US Census Bureau estimate, the city had a total population of 21,707. The area is currently experiencing a high level of population growth as Chicago's urban sprawl spreads farther west.

Geneva is a popular tourist destination with its scenic location along the Fox River and numerous shops and restaurants. There is an extensive bike trail system in Geneva including portions of the Fox River Trail and the Illinois Prairie Path. Geneva has an active historical society, the Geneva History Center, located in downtown Geneva as well as the Fabyan Windmill, an old Dutch windmill dating back to the 1850s. In 2013 it was nominated by Bloomberg Business Week as the best place to raise a kid in Illinois.

Geneva was first settled in the 1830s on an important route from Chicago. Daniel Shaw Haight was the first settler in Geneva. Haight sold his claim in 1835 to James and Charity Herrington, who were influential in the creation of the town of Geneva. A local's connections with Col. Richard Hamilton, a prominent Cook County politician, led to the naming of Geneva as county seat in 1836. The town was platted a year later and was probably named after Geneva, New York. Before the name Geneva was chosen, the names LaFox, Big Spring, and Herrington's Ford were used. A courthouse and jail were among the first major works. Geneva was incorporated as a village in 1867. While its site as a county seat attracted attention, the village's location on the Fox River provided the most economic opportunities. Early goods manufactured in Geneva included cheese, butter, milled grains, and packed meat. The connection of the railroad in 1853 provided increased demand for industry, and by 1900, Appleton Manufacturing, Howell Foundry, Bennet Milling Co., and Pope Glucose Co. became major employers. This resulted in major civic improvement projects such as a pumping stations and water mains in 1896. Geneva was particularly noted for its flux of Swedish immigrants, who comprised half of the population by 1900. A year later, Geneva was connected to other Fox Valley communities through the Aurora, Elgin and Fox River Electric Company.

The Fabyan Windmill is an authentic, working Dutch windmill dating from the 1850s located in Geneva, Kane County, Illinois, just north of Batavia, Illinois, off Illinois Route 25. The five-story wooden smock mill with a stage, which stands 68 feet (21 m) tall, sits upon the onetime estate of Colonel George Fabyan, but is now part of the Kane County Forest Preserve District.

On June 4, 1979, the windmill was listed on the National Register of Historic Places as the Dutch Mill. The following year, the windmill was selected to be on a U.S. postage stamp, as part of a series of five windmills in a stamp booklet called "Windmills USA." It originally operated as a custom grinding mill. 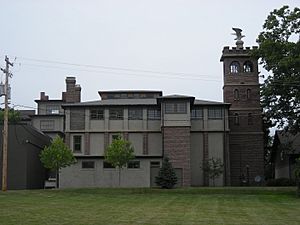 Riverbank Acoustical Laboratories is a NVLAP accredited acoustical testing agency founded by Wallace Clement Sabine in 1918. The acoustical laboratory building was funded and built by Colonel George Fabyan on his vast Riverbank Estate in Geneva, IL. In the facility's early days, It also housed a cryptology team that worked to decipher codes from the works of Sir Francis Bacon, Shakespeare, and enemy military communications. It was added to the National Register of Historic Places on November 28, 2003.

Elizabeth Place, or the Henry Bond Fargo House, is a historic residence in Geneva, Illinois in the Mission Revival style. The house was owned by Henry Bond Fargo, a prominent local businessmen who brought several early industries to Geneva. It was added to the National Register of Historic Places on May 12, 2008. 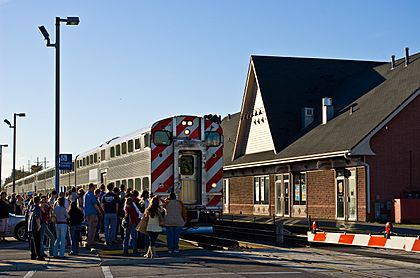 Geneva is also served by the Pace bus system run by Chicago's suburbs. The following bus routes run through this city:

As a part of the Chicago metropolitan area, Geneva has a station on the Union Pacific/West line of the Metra commuter rail system; it provides frequent service to downtown Chicago, 36 miles (58 km) away, and extends west to Elburn. 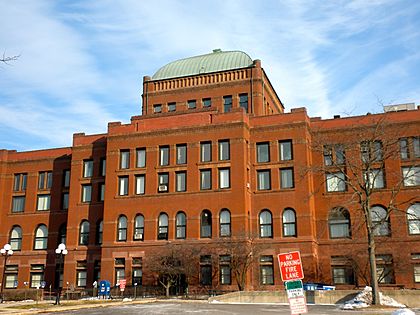 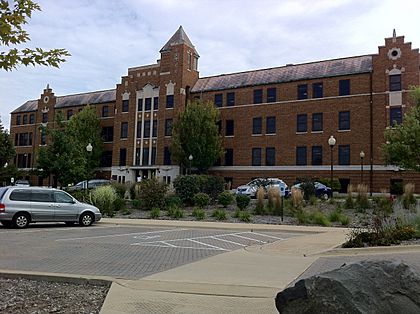 There were 8,278 households out of which 37.3% had children under the age of 18 living with them, 63.8% were married couples living together, 8.6% had a female householder with no husband present, and 24.6% are non-families. 20.8% of all households were made up of individuals and 7.8% had someone living alone who was 65 years of age or older. The average household size was 2.72 and the average family size was 3.18.

There were 6,718 households out of which 45.2% had children under the age of 18 living with them, 68.0% were married couples living together, 6.8% had a female householder with no husband present, and 22.8% are non-families. 19.2% of all households were made up of individuals and 6.0% had someone living alone who was 65 years of age or older. The average household size was 2.85 and the average family size was 3.31.

Also containing over 30 parks for recreation use.

All content from Kiddle encyclopedia articles (including the article images and facts) can be freely used under Attribution-ShareAlike license, unless stated otherwise. Cite this article:
Geneva, Illinois Facts for Kids. Kiddle Encyclopedia.