Roselle is a village in DuPage County and Cook counties in northeastern Illinois, United States. It was first incorporated in 1922 and is a bedroom community, with residents generally commuting to Chicago or nearby suburbs for their jobs. As a result, the early rural atmosphere of the community has been lost over the past 30 years. As of the 2010 census, the village's population was 22,763. Roselle is a western suburb of Chicago and is part of the Chicago metropolitan area. 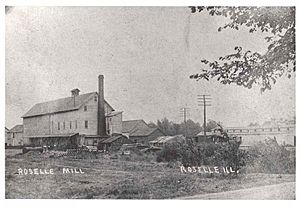 The area surrounding the current village of Roselle began to be settled in the early 1830s, as settlers moved in next to the native Potawatomi people. Silas L. Meacham and his brothers Harvey and Lyman settled the area now known as Bloomingdale Township. The government had been offering land in the area for around $1.25 / acre. In 1837, Deacon Elijah Hough and his wife settled in the Bloomingdale area, with his sons Oramel, Rosell [sic] and daughter Cornelia.

In 1868, at the age of 48, Rosell Hough returned from a career as an alderman and a businessman in Chicago, and saw that the area had become a farming center for corn and flax. He opened the Illinois Linen Company on the northwest corner off of what is now Roselle Road and Irving Park Road. Hough was also the president of the Chicago and Pacific Railroad Company. It is rumored that because of his position, he spent some money to alter a land survey to show that a railroad line should run through Roselle, Itasca and Wood Dale instead of Addison and Bloomingdale. The train schedule misprinted the name of the town on the rail line, giving Roselle its current name.

Roselle is roughly bounded by Nerge Road to the north, unincorporated Medinah to the east, Lake Street to the south and Gary Avenue to the west. The main arterial roads of Irving Park Road and Roselle Road run east-west and north-south, respectively, through the central commercial area of Roselle.

Bicycle trails link the nearby cities of Schaumburg and Bloomingdale. The North Central DuPage Regional Trail runs through far southeastern portions of Roselle.

Roselle has a station on Metra's Milwaukee District/West Line, which provides daily rail service between Elgin and Chicago Union Station.

There were 8,443 households out of which 37.6% had children under the age of 18 living with them, 61.2% were married couples living together, 9.5% had a female householder with no husband present, and 26.1% were non-families. 21.2% of all households were made up of individuals and 5.6% had someone living alone who was 65 years of age or older. The average household size was 2.73 and the average family size was 3.22.

There are three main commercially zoned areas in the village. One is along the southern border of the town along Lake Street (U.S. Route 20), the second is in the center of the village near the historical center of Park Street and Irving Park Road (Illinois Route 19). In 2005, a new downtown business development opened along the Soo Line Railroad tracks just north of the town center (Main Street Station). The third is along Nerge Road, the northern edge of the village. Plans are currently underway for the redevelopment of the Downtown District in addition to Main Street Station. The several phase project is collectively known as Village Crossing. Roselle is home to Lynfred Winery, established in 1979. What started off as a retirement hobby by Fred and Lynn Koehler, now producing over 120 varietals of wine and over 30,000 cases of wine yearly.

All content from Kiddle encyclopedia articles (including the article images and facts) can be freely used under Attribution-ShareAlike license, unless stated otherwise. Cite this article:
Roselle, Illinois Facts for Kids. Kiddle Encyclopedia.