Kids Encyclopedia Facts
This page is about the shrine in Darien, Illinois, USA. For the church in San Antonio, Texas, USA, see Basilica of the National Shrine of the Little Flower. For other topics, see Saint Therese (disambiguation). 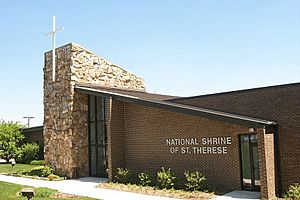 The National Shrine of St. Thérèse in Darien, Illinois is a Roman Catholic shrine dedicated to St. Thérèse of the Child Jesus and the Holy Face. The Shrine is a part of the Aylesford Carmelite campus, run by the Carmelite Order of the Most Pure Heart of Mary. The Shrine includes both a museum devoted to the saint and a chapel.

St. Clara Church on Woodlawn Avenue in Chicago became the first home of the National Shrine of St. Thérèse in the 1920s. In the 1950s, the United States Conference of Catholic Bishops declared the site a National Shrine.

In 1975, a fire destroyed St. Clara and the Carmelites were faced with the financial challenge of reconstruction of the Shrine. A large bequest from a devoted Lay Carmelite made it possible for the Carmelites to build a new Shrine facility on the Aylesford Carmelite campus in Darien, Illinois.

The National Shrine museum is housed in a room adjacent to its chapel and is a rich treasury of relics and memorabilia of St. Thérèse. It contains the largest and most complete collection of Little Flower objects outside of Lisieux, France.

Highlights of the National Shrine museum include: the original statue of St. Thérèse commissioned in the 1920s; young Thérèse’s tambourine, the original map she drew of North America at age 12, the original oil painting of her by her sister, Celine (which she declared was the best representation of her saintly little sister), another original charcoal drawing of Thérèse as a novice; one of the original four copies of the manuscript Thérèse wrote which became her autobiography, “The Story of A Soul,” a piece of the bedspread from her room, tea cups she used when she had her evening chats with her father, her first communion prayer book, and many more intimate items which connect people with St. Thérèse.

The Museum also houses a number of items on loan from the Carmel at Lisieux. In 2010 these items included a ciborium and chalice from Therese's time as sacristan for her community.

The center of the National Shrine is a chapel, dominated by huge stained-glass windows that depict the journey of the soul to God, modeled on St. John of the Cross’ Ascent of Mount Carmel.

Carving depicting the life of St. Thérèse at the National Shrine in Darien, IL

The front of the chapel features a large wood carving of the life of St. Thérèse. The carving was designed by Helen Henke and hand-carved in Italy by Vincenzo Demetz Figlio. Measuring 12 feet by 28 feet, it tells her whole life story in a visual and beautiful way. It is the largest wood carving of a religious nature in the United States.

Mass is celebrated in the Shrine chapel at 11:30 a.m., Monday through Friday and the Shrine welcomes both individual visitors and organized tour groups. Each year, thousands of pilgrims from around the world visit the Shrine. There is a religious gift shop within the Shrine building where visitors can purchase books, devotional aids, and other Theresian items.

All content from Kiddle encyclopedia articles (including the article images and facts) can be freely used under Attribution-ShareAlike license, unless stated otherwise. Cite this article:
National Shrine of St Therese Facts for Kids. Kiddle Encyclopedia.