Itasca is a village in DuPage County, Illinois, United States. Located approximately 25 miles northwest of downtown Chicago, Itasca is close to O'Hare International Airport, major expressways and rail transportation. Itasca is home to a country club, a resort and shares a border with Medinah's legendary golf course. The population was 9,725 at the 2020 census. BusinessWeek rated Itasca as the Best Affordable Suburb in the state of Illinois.

Itasca was first settled by Elijah Smith in 1841. Smith practiced medicine in Boston. In May 1841, at the advice of his colleagues he set out to find a suitable site for doctoring, farming, and raising a family. He traveled from New York via Detroit and headed toward DuPage County. His parchment government land title dated March 10, 1843, was signed by John Tyler, President of the United States. The document gave Smith title to the land that is now bounded by the railroad tracks on the south, Maple Street on the west, Cherry Street on the east, and Division Street on the north. The post office was established in 1846 and took on various names, such as Bremen, Pierce (after Charles Pierce, who ran a trading post), and Sagon. The name Itasca comes from Lake Itasca. In the 1860s the first school was built. It was a small wooden structure with one room. The building was located on a site near the present First Presbyterian Church.

In 1873 Smith plotted eighty acres of his land into lots. The Chicago and Pacific Railroad was completed from Chicago to Elgin, with stations at Bensenville, Wood Dale (called Lester) and Itasca. Smith gave the right-of-way to encourage location of the tracks through the settlement. He donated $400 to help build a station.

The Chicago and Pacific Railroad became "insolvent," as bankruptcy was then termed. In 1880 the road went into the hands of the Chicago, Milwaukee and St. Paul Railroad, a newly formed corporation combining several roads.

The citizens of Itasca decided in 1890 to incorporate into a village. At a meeting at his mill, A. G. Chessman was elected the first Village President. Irving Park Road was first called the Chicago and Elgin Road. At an 1891 Village Board meeting, the name was changed to Elgin Avenue.

In 1987, the Village adopted the Historic Preservation Ordinance which provides a mechanism to identify and preserve the special distinctive historic, aesthetic, architectural and/or landscaping characteristics of the Village's cultural, social, economic, political and architectural history.

The Spire, which is Itasca's most familiar landmark, graces the top of what was formerly the Lutheran Church of St. Luke. This edifice was erected in 1907 by builder Fred Westendorf. Pastor Frederick Zersen served the congregation for thirty-eight years. Church services were in German. It was not until 1926 that English services were held twice a month. German was also taught in the church school. Until 1916, there was no bank in Itasca. Herman H. Franzen took deposits for Village residents to the Roselle Bank each morning, making the trip regularly on the 9:00 AM train. In 1916, two banks opened within weeks of each other. The Itasca State Bank had as its president H. F. Lawrence. The cashier was Elmer H. Franzen. The second bank was called the Dairyman's Bank of Northern Illinois, and was opened by F. N. Peck. Peck opened a total of four banks, but the Depression forced him to close them all. The Franzen banks in Itasca, Roselle, and Fox Lake were sound throughout the hard times of the 1920s, and emerged successfully from the Depression.

Telephone service had come to Itasca in 1899. Electricity was first installed in some homes in 1923. The bustling community soon gained another facility. The Itasca Country Club was opened in the spring of 1925.

The rural village of the 1800s and early 1900s retained its atmosphere until the 1940s. A new word then began to enter the American vocabulary: suburb. The influence of the city increased as population increased. Commuting daily to the Loop became the routine for many of the Village wage earners. By 1982, the population had grown to 7,192. Annexations had resulted in fifty miles of Village streets, more parks, and two industrial areas to serve. Providing safety and service as population increased required the establishment of departments of public works, of sewer and water, of building and police. A park district, a Village library, and a fire district were formed.

Modern industry was foreign to Itasca until 1961 when Central Manufacturing District (CMD) bought about 400 acres on the western edge of the village. An industrial park was established, and such national companies as Continental Can and FMC soon moved in. In 1970, the Itasca Industrial Park was established to the east of the Village, and attracted many more industries.

Anvan Corporation built a Holiday Inn on Irving Park east of Route 53. The building was of modular construction, the first such hotel in the nation to be built in this manner.

In October 1979, Trammell Crow Company of Texas broke ground for Hamilton Lakes. A 420-room Stouffer Hotel and a ten-story office building, completed in 1981, constituted the first phase of the project, situated on 278 acres on the northwest edge of Itasca. To date 15 buildings out of an estimated 26 have been completed, amounting to 2,767,589 gross square feet of floor space with an ultimate development of 4,490,700 gross square feet. A 16-story office building was added to the complex in 1984.

In 1966, the Village purchased 60 acres of land south of Irving Park Road. This established a green belt area to ensure both open space and water retention. In 1968 the Spring Brook Nature Center was formed.

A Master Plan for this area was adopted in 1965, and continues to guide the community into its future. Itasca, having celebrated its 100th anniversary in 1990, continues to control its development according to the individuality of its past.

The overall growth and development of the Village has and is being controlled by the Comprehensive Plan that was first adopted in 1942 and has been amended in 1959, 1979, and 1993.

Outstanding residential neighborhoods, first-rate schools, and beautiful parks distinguish Itasca as a quality community. Most importantly, we have worked to retain our small town charm with a lovely historic district and churches of all architectural styles.

There were 3,179 households, out of which 31.9% had children under the age of 18 living with them, 58.9% were married couples living together, 8.7% had a female householder with no husband present, and 29.0% were non-families. 23.2% of all households were made up of individuals, and 5.9% had someone living alone who was 65 years of age or older. The average household size was 2.57 and the average family size was 3.07. 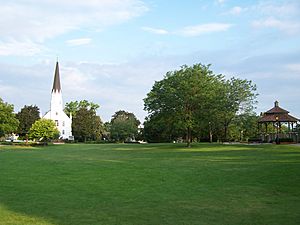 The Itasca Baptist Church across the street from Usher Park with the gazebo is an Itasca landmark.

The four main are only four railroad crossings in Itasca, from west to east: IL 53/Rohlwing Road, Catalpa Street, Walnut Street, and CR 10/Prospect Avenue and several others in the Industrial Parks.

Walnut Street, between Bloomingdale Road and Division Street, is generally regarded as Itasca's "downtown". There is a 7-11, dry cleaners, Cucina Casale Italian Restaurant, Daddy O's Diner, Kean's Bakery, the train station, a Starbucks, Tree Guys Pizza Pub, as well as Wine With Me and Helix Camera & Video. The town's landmarks include Itasca Baptist Church, and Usher Park, which is on Walnut Street. A riverwalk was recently added, and Gigi Gruber Lane is a tribute to former mayor Gigi Gruber. Irving Park Road between Interstate 290 and First Street is also a commercial corridor, as well as the home of the town's Municipal Campus (library, museum, pool, fire station, and police station/village hall). West of I-290, Irving Park Road remains commercial, but with more national chain businesses (Holiday Inn, Subway, etc.) The Itasca post office is also on this stretch.

Itasca has a station on Metra's Milwaukee District/West Line, which provides daily rail service between Elgin and Chicago (at Union Station).

The town is also located at the junction of Interstate 290, Veterans Memorial Tollway, and the Elgin-O'Hare Expressway, making Itasca a prime location for commerce and industry in the northwest suburbs.

State Highway 19 (Irving Park Road), which connects Chicago and Elgin, runs east–west through the center of town. State Highway 53 (Rohlwing Road) runs north–south through the western edge of the village.

Prior to 1995, Itasca's School District 10 had one PreK-5 elementary school on each side of town: Franzen School on the North Side and Raymond Benson Primary School (formerly Washington School) on the South Side. (Upon entering 6th grade, all students attend Peacock Jr. High (later renamed Peacock Middle School) on the town's North Side. Itasca is served by High School District 108, Lake Park High School in nearby Roselle).

St. Peter the Apostle Catholic Church and School offered elementary education in Itasca from 1963 until its closure in 2010.

St. Luke Lutheran Church and School dates back to 1885. The Church and school were relocated to their current location at Washington and Rush street in 1961.

All content from Kiddle encyclopedia articles (including the article images and facts) can be freely used under Attribution-ShareAlike license, unless stated otherwise. Cite this article:
Itasca, Illinois Facts for Kids. Kiddle Encyclopedia.