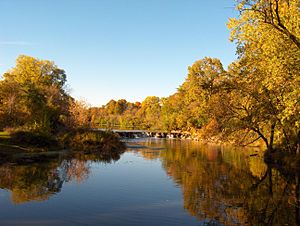 Warrenville Grove Forest Preserve on the West Branch of the DuPage River, where Julius Warren claimed land in 1833. 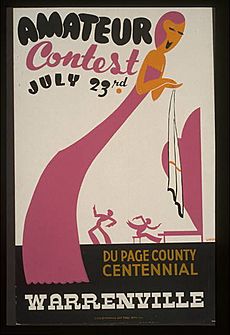 Warrenville is a city in DuPage County, Illinois, United States. As of the 2010 census, the city had a total population of 13,140, which was estimated to have increased to 13,316 by July 2012. It is a part of the Chicago metropolitan area and the Illinois Technology and Research Corridor.

Warrenville was founded in 1833 when Julius Warren and his family moved west from New York seeking a fresh start from a failing gristmill and distillery. Daniel Warren, Julius' father, claimed land at what is now McDowell Woods, and Julius claimed land at what is now the Warrenville Grove Forest Preserve. The first major establishment, an inn and tavern, was built in 1838 by Julius Warren himself, as the family was skilled in timber and grain. The inn still stands today, and was renovated in 2002.

The town quickly blossomed with two mills and a plank road connecting it with Naperville and Winfield, on which Julius operated a stagecoach line. The town failed at its bid to have the railroad come through the town. However, in 1902, the Chicago Aurora and Elgin Railroad came through town, which lasted until the late 1950s.

With a population of 4,000, Warrenville was finally incorporated as a city in 1967, following six unsuccessful attempts. The 1970s and 1980s brought westward expansion from the city of Chicago, causing the small farming community's population to nearly double to 7,800.

There were 4,931 households out of which 39.3% had children under the age of 18 living with them, 57.2% were married couples living together, 9.7% had a female householder with no husband present, and 29.5% were non-families. 23.6% of all households were made up of individuals and 4.0% had someone living alone who was 65 years of age or older. The average household size was 2.71 and the average family size was 3.26.

There is an "old neighborhood", south, with mixed housing styles near Galusha Avenue. There is a Forest Preserve neighborhood, east, with wooded-lot expensive multi-acre homes close to Cantigny War Museum, Cantigny Golf Course, and Mckee Marsh. In the mid-1970s two large subdivisions were developed in the west, next to Fermilab, a scientific research center where the world's largest superconducting particle accelerator ring was located. The subdivisions are called Summerlakes and Fox Hollow. Other notable subdivisions of Warrenville include Warrenville Lakes, Saddle Ridge, Thornwilde, Edgebrook and River Oaks.

Downtown Warrenville is located at the intersection of Butterfield Road and Batavia Road. The addition of another TIF district, a new police station was built in 1998, a new City Hall in 2001, a new Public Works Building in 2002, and additions were made to the library in 2003.

In the 1950s, the library was housed in 1,000 square feet (93 m2) in the Community Building and was essentially a volunteer library filled with donated materials. Ten years later, the library closed due to a lack of volunteers and funding. The Warrenville Public Library District was formed by a referendum held in February 1979 with the citizens approving a 15-cent rate for library services. In 1986, voters approved another 15-cent tax rate increase to build and operate a 10,000-square-foot (930 m2) facility on Stafford Place. In September 2003, a large addition and renovation project which tripled the size of the facility was completed. The building was made possible by the City of Warrenville TIF funds. The Warrenville Public Library District is a member of the DuPage Library System.

All content from Kiddle encyclopedia articles (including the article images and facts) can be freely used under Attribution-ShareAlike license, unless stated otherwise. Cite this article:
Warrenville, Illinois Facts for Kids. Kiddle Encyclopedia.