Carol Stream is a village in DuPage County, Illinois, United States. Incorporated on January 5, 1959, and named after the developer's daughter, Carol Stream had a population of 39,711 as of the 2010 U.S. census. In 2011 CNN's Money Magazine ranked Carol Stream 49th on its list of 100 best places to live in the United States.

In 1853, St. John Wahlund Catholic Church was built in Gretna. The church was closed in 1867. When St. Michael Church was opened in Wheaton in 1872, the St. Stephen parishioners were transferred to that parish. The church building was dismantled sometime in the late 19th century. St. Stephen Cemetery was located adjacent to the church building. It was last used for burial in 1910. The St. Stephen Cemetery (located north of the Great Western Trail behind Meyer Material Company on St. Charles Road) was rededicated 100 years later on September 12, 2010.

In 1952, a farm from the area was featured on NBC; it was the site for the first outdoor telecast by the network in 1954.

A common misconception is that the municipality of Carol Stream was named for a local minor waterway. In fact, Carol Stream is one of the few communities in America which took its name from the first and last names of a living person: Carol Stream, the daughter of its founder Jay Stream.

Jay W. Stream (April 17, 1921 – January 22, 2006), a military veteran who had previously sold insurance and ready-mix concrete, was in the mid-1950s heading Durable Construction Company. He became frustrated with red tape while negotiating a planned 350–400 home subdivision in nearby Naperville, Illinois. A Naperville clerk reportedly advised Stream to "build your own town", and in 1957, Stream began buying unincorporated farmland outside Wheaton. He hoped to allow people to work in the town they lived in, rather than have to commute to Chicago.

On August 26, 1957, Carol and three friends were returning from Racine, Wisconsin in a 1949 Studebaker. While attempting to cross U.S. Route 45 in central Kenosha County, the car was struck in the right rear corner, killing 15-year-old Richard Christie of Chicago, the passenger seated there. Carol was ejected through the windshield and into a utility pole. Neurosurgeons at Kenosha Memorial Hospital said the comatose girl might never awaken or, if she did, would likely be severely handicapped. On advice of the doctors that her recovery might improve with good news, Jay decided to name the new community in her honor. After four months in a coma, Carol regained consciousness. Learning the new village bore her full name, Carol said she thought it "odd and silly" at first (as she told Chicago Tribune reporter Eric Zorn in 1991).

Carol Stream was named Jacqueline Stream, but her parents changed her name to Carol when her due date fell near Christmas. She never lived in her namesake community but moved from Wheaton, Illinois to Arizona in 1957 following the end of her parents' marriage. She still participates in municipal celebrations and rides in parades during anniversary celebrations of the municipality's 1959 incorporation, and is frequently asked for autographs when she is in town.

One of the town's two middle schools, Jay Stream Middle School is named after the founder, Jay Stream, who died on January 22, 2006. 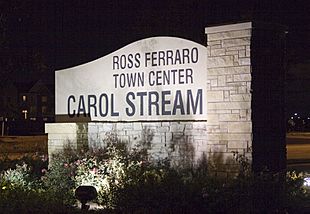 Carol Stream has six major roads running through the village. The most important of these is North Avenue, which runs relatively close to the center of Carol Stream and serves the majority of its industrial areas. North Avenue is an East-West road which extends a further 30 miles East into Chicago as well as further west across the state. Army Trail Road and Geneva Road are the other major east-west roads.

Gary Avenue is a major north-south road to the commercial center of Bloomingdale and the Stratford Square Mall. County Farm Road also serves as a major commercial route for residents. Schmale Road serves a small commercial area on the southeastern side of Carol Stream. Kuhn Road also runs north-south, but is not that major.

Lies Road is a minor east-west road that bisects the village starting from Fair Oaks Drive on the west to Schmale on the east. The portion from Country Farm Road thru Kuhn Road to near Gary Avenue is the route for the annual Fourth of July parade. Schmale Rd. is named after a victim of Richard Speck who killed 8 nurses in Chicago in 1966.

A feeder line from the nearby Illinois Central Railroad serves the main industrial complex for Carol Stream. The old Gretna Railway Station had been renamed Carol Stream in 1962, the station manager of four years at the time, Frank S. Shilling, said he never found out why the station was named Gretna. The original building was preserved and moved to the Carol Stream Park District, where it serves as a museum and a home for the Carol Stream Historical Society.

All content from Kiddle encyclopedia articles (including the article images and facts) can be freely used under Attribution-ShareAlike license, unless stated otherwise. Cite this article:
Carol Stream, Illinois Facts for Kids. Kiddle Encyclopedia.