St. George (Aleut: Anĝaaxchalux̂ or Sangiurgiix̂, Russian: Сент-Джордж) is a city in Aleutians West Census Area, Alaska, United States. At the 2010 census the population was 102, down from 152 in 2000. It is the main settlement of St. George Island in the Pribilofs, a small island group in the Bering Sea.

There were 51 households, out of which 47.1% had children under the age of 18 living with them, 54.9% were married couples living together, 15.7% had a female householder with no husband present, and 17.6% were non-families. 15.7% of all households were made up of individuals, and none had someone living alone who was 65 years of age or older. The average household size was 2.98 and the average family size was 3.29. 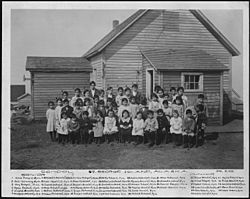 St. George is served by the Pribilof Island School District. In 2004, the district began offering 9-12th grade to St. George students via video conference. Students have a choice: they can live at home and attend distance education classes or they can leave home and attend a boarding school like Mt. Edgecumbe High School.

In 2017, St. George School was closed entirely due to low enrollment. The district now offers a correspondence program for grades K-10.

All content from Kiddle encyclopedia articles (including the article images and facts) can be freely used under Attribution-ShareAlike license, unless stated otherwise. Cite this article:
St. George, Alaska Facts for Kids. Kiddle Encyclopedia.