The New Zealandic falcon (Māori: kārearea; Falco novaeseelandiae) is New Zealand's only falcon. Other common names for the bird are bush hawk and sparrow hawk. It is frequently mistaken for the larger and more common swamp harrier. It is the country's most threatened bird of prey, with only around 3000–5000 breeding pairs remaining. 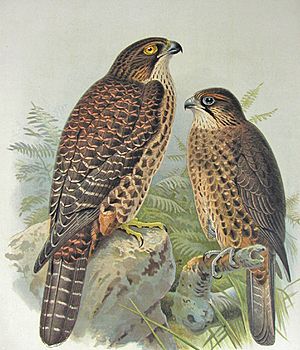 Ornithologists variously described the New Zealand falcon as an aberrant hobby or as allied to three South American species (F. deiroleucus, F. rufigularis, and F. femoralis); however molecular phylogenetic studies show that it is most closely related to the South American Aplomado falcon. Two forms are apparent from their significantly different sizes with the larger race in the South Island and the smaller in the North Island. Although neutral genetic markers show a recent history of these two forms, the substantial size difference is likely to be driven by ecological adaptation. Conservation management had already avoided mixing of the North Island (Falco novaeseelandiae ferox) and South Island (Falco novaeseelandiae novaeseelandiae) populations.

With a wingspan between 63 cm (25 in) and 98 cm (39 in) and weight rarely exceeding 450 g (16 oz), the New Zealand falcon is slightly over half the size of the swamp harrier, which it usually attacks on sight. (Unlike the swamp harrier, the New Zealand falcon catches other birds in flight, and rarely eats carrion.) The male is about two-thirds the weight of the female.

The New Zealand falcon is mainly found in heavy bush and the steep high country in the South Island, and is rarely seen north of a line through the central area of the North Island. A small population also breeds on the Auckland Islands; the species is known from the Chatham Islands from fossil remains.

An aggressive bird that displays great violence when defending its territory, the New Zealand falcon has been reported to attack dogs, as well as people. 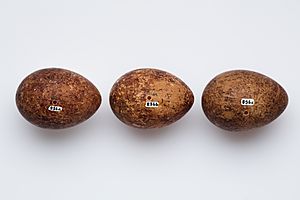 Falco novaeseelandiae eggs in the collection of Auckland Museum

The New Zealand falcon nests in a scrape in grassy soil or humus in various locations: under a rock on a steep slope or on a rock ledge, among epiphytic plants on a tree branch, or under a log or branch on the ground, or on bare ground, making the two or three eggs that they lay vulnerable to predators such as stray cats, stoats, weasels, possums, and wild dogs.

Although protected since 1970, the kārearea is a threatened species, with fewer than 8000 birds remaining. They continue to be persecuted by farmers and pigeon-owners: up to three-quarters of falcons die in their first year, mostly as a result of human actions.

In 2005, funding was given by the Ministry of Agriculture and Forestry towards a programme that uses the falcons to control birds that damage grapes and act as pests in vineyards as well as monitoring the birds and establishing a breeding population in the vicinity of the Marlborough wine region. Initially, four falcons were relocated to the vineyards from the surrounding hills. After the release of a further 15 birds breeding began to occur – the first time it is thought to have happened since land clearance 150 years ago.

The Cardrona Valley in the South Island has a small population of kārearea. The five year project that started in 2019 will focus on collecting data on the kārearea to gather knowledge of sightings, locate breeding pairs, locate and monitor nests, and gain insights on breeding population, habitat use, and territory size.

A major ongoing threat to the birds is electrocution. Both a five-year radio tracking study of released birds in Marlborough and an observational study in Glenorchy have attributed nearly half of the bird deaths to electrocution on 11,000 volt distribution transformers and structures.

Bird of the Year

The kāreare was voted Bird of the Year winner in 2012. The Forest & Bird competition aims to raise awareness about New Zealand's native birds, their habitats, and the threats they face. 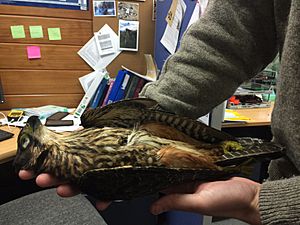 All content from Kiddle encyclopedia articles (including the article images and facts) can be freely used under Attribution-ShareAlike license, unless stated otherwise. Cite this article:
New Zealand falcon Facts for Kids. Kiddle Encyclopedia.