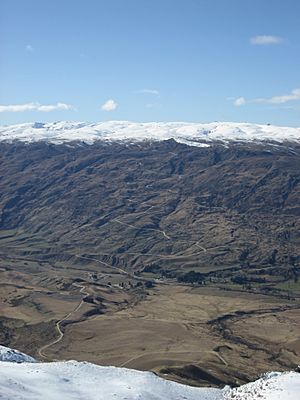 View of Cardrona Valley of the Cardrona River

The Cardrona River is in Otago in the South Island of New Zealand. It is one of the first tributaries of the Clutha River / Mata-Au, which it meets only 5 kilometres (3 mi) from the latter's origin at the outflow of Lake Wānaka.

The Cardrona flows north for 40 kilometres (25 mi) down the steep narrow Cardrona Valley. Its headwaters are near New Zealand's highest main road, the Crown Range route. The river runs past the settlement of Cardona and the Cardrona skifield, then south of Wanaka township.

The original name of the river is the Ōrau. It was a traditional Māori route linking Whakatipu Waimāori (Lake Wakatipu) with lakes Wānaka and Hāwea. Ngāi Tahu recorded Ōrau as a kāinga mahinga kai (food-gathering place) where tuna (eels), pora ('Māori turnip') and weka were gathered.

All content from Kiddle encyclopedia articles (including the article images and facts) can be freely used under Attribution-ShareAlike license, unless stated otherwise. Cite this article:
Cardrona River Facts for Kids. Kiddle Encyclopedia.