Lake Wakatipu is an inland lake (finger lake) in the South Island of New Zealand. It is in the southwest corner of the Otago region, near its boundary with Southland. Lake Wakatipu comes from the original Māori name Whakatipu wai-māori.

With a length of 80 kilometres (50 mi), it is New Zealand's longest lake, and, at 291 km2 (112 sq mi), its third largest. The lake is also very deep, its floor being below sea level, with a maximum depth of 380 metres (1,250 ft). It is at an altitude of 310 metres (1,020 ft), towards the southern end of the Southern Alps. The general topography is a reversed "N" shape or "dog leg". The Dart River / Te Awa Whakatipu flows into the northern end, the lake then runs south for 30 kilometres before turning abruptly to the east. Twenty kilometres (12.4 mi) further along, it turns sharply to the south, reaching its southern end 30 kilometres (19 mi) further south, near Kingston.

The lake is drained by the Kawarau River, which flows out from the lake's only arm, the Frankton Arm, 8 km (5.0 mi) east of Queenstown. Until about 18,000 years ago the Mataura River drained Lake Wakatipu. The Kingston Flyer follows part of the former river bed now blocked by glacial moraine. Queenstown is on the northern shore of the lake close to eastern end of its middle section. It has a seiche of period 26.7 minutes which, in Queenstown Bay, causes the water level to rise and fall some 200 millimetres (7.9 in).

Lake Wakatipu is renowned for its scenic beauty, being surrounded by mountains. The Remarkables mountain range lies along its southeastern edge. It is a popular venue for adventure tourism, with skifields, paragliding, bungy jumping and tramping tracks within easy reach. A vintage steamboat, the TSS Earnslaw regularly plies its waters. Several vineyards are nearby in Gibbston.

The full original name of the lake is Whakatipu-wai-Māori.

The name is believed to originate from the Waitaha people, who were later displaced by Kāti Māmoe. Elders from the modern iwi Ngāi Tahu say that while the name Whakatipu is archaic and its original meaning is a mystery, whaka means causative and tipu means growth. Wakatipu could mean "growing bay" if the original was Whakatipu and the h elided as a result of the Southern Māori dialect. The dialect is also known for dropping final vowels. Waka can also mean 'hollow'. Wakatipua or Whakatipua (Canoe/Bay of spirits) have been recorded historically, as has Wakatapu (sacred vessel).

Whakatipu is also the name of another six unrelated geographical features in the South Island, including Tarahaka Whakatipu, the Harris Saddle at the head of the Routeburn Track; Whakatipu Katuka, the Hollyford River and Valley; and Whakatipu Kohurangi, Māori Bay in Pelorus Sound, Marlborough.

A legend says that the lake bed was formed when a giant ogre, Kopu-wai, was burned while lying asleep, leaving only his heart behind, which according to the same legend is the cause of the rhythmic rise and fall of the lake's seiche. 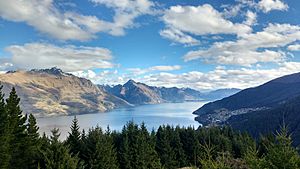 Lake Wakatipu is a habitat for the longfin eel (a specimen caught in 1886 is the largest known of this species), brown trout, salmon and rainbow trout. These and other fish support predators such as the pied shag. The black-billed gull is often found around the lake while the most common birds are the black-billed gull and the introduced mallard. A smaller bird often not noticed because of its size is the New Zealand scaup.

All content from Kiddle encyclopedia articles (including the article images and facts) can be freely used under Attribution-ShareAlike license, unless stated otherwise. Cite this article:
Lake Wakatipu Facts for Kids. Kiddle Encyclopedia.