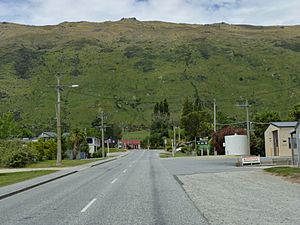 Kingston is a small town at the southernmost end of Lake Wakatipu, just north of the border of Otago and Southland, in New Zealand's South Island. It is 47 kilometres south of Queenstown by a road which winds between the lake to the west and The Remarkables mountains to the east. It is 70 kilometres north of Lumsden, and close to the headwaters of the Mataura River.

The Kingston Flyer historic railway service is closely associated with the town. It operates over a 14 kilometre long preserved section of the former Kingston Branch, which provided a rail link from the city of Invercargill to Kingston for over a century, opening in 1878 and closing in 1979 after a section of track between Garston and Athol was washed out in a storm.

All content from Kiddle encyclopedia articles (including the article images and facts) can be freely used under Attribution-ShareAlike license, unless stated otherwise. Cite this article:
Kingston, New Zealand Facts for Kids. Kiddle Encyclopedia.