The Kingston Flyer is a vintage steam train in the South Island of New Zealand at the southern end of Lake Wakatipu. It used 14 kilometres of preserved track that once formed a part of the Kingston Branch. Originally, Kingston Flyer was a passenger express train between Kingston, Gore, Invercargill, and less frequently, Dunedin. It was operated by the New Zealand Railways (NZR) from the 1890s to 1957. In 1971, NZR revitalised the service as a tourist venture, later leasing the locomotives and rolling stock in 1982 to a private company. Since then, the Kingston Flyer has been through a number of owners, most recently being owned by the Kingston Flyer Ltd. A group of volunteers is currently restoring the railway, rolling stock and locomotives to service, but there is no timeframe for when services might resume. 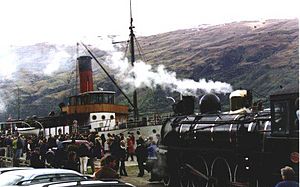 Kingston Flyer and the TSS Earnslaw at the Kingston Quay

The Kingston Flyer was introduced in the late 1890s as New Zealand recovered from the Long Depression of the 1880s. During the Long Depression, slow mixed trains that carried both passengers and freight had served the Kingston Branch and Waimea Plains Railway, daily in some years and only a few times per week in others. However, as the economy was revitalised, the Railways Department sought to increase services on the two lines. The government acquired the Waimea Plains Railway and incorporated it into the national network. The Kingston Branch ran north–south between Invercargill and Kingston, while the Waimea Plains Railway diverged from the branch in Lumsden and ran eastwards, meeting the Main South Line in Gore. Mixed services operated to a higher frequency, and dedicated passenger trains were introduced. These services came to be known as the Kingston Flyer, especially the Gore-Kingston services across the Waimea Plains. 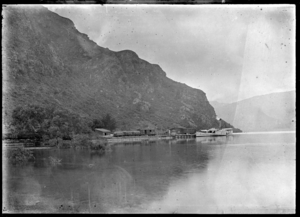 Paddle steamer at Kingston Wharf in 1926

The Flyer served Kingston every weekday. On Mondays, Wednesdays, and Fridays, it ran Kingston-Gore, where it connected with Main South Line expresses between Dunedin and Invercargill. On Tuesdays and Thursdays, it operated Kingston-Invercargill, using the length of the Kingston Branch. In the early years, services were typically operated by K and V class steam locomotives. At peak periods, especially Christmas and Easter, special services had to be operated to cater for demand, with some operating from Dunedin through to Kingston, where they connected with Lake Wakatipu steamboats to the popular holiday destination of Queenstown. For many years, this was the primary means of travelling to Queenstown.

In the 1930s, passenger numbers declined sharply and the Railways Department looked to cancel its services on the Kingston Branch. That occurred on 4 October 1937, bringing an end to the regular Flyers. Until 17 September 1945, an abbreviated service continued to operate across the Waimea Plain to the Kingston Branch junction in Lumsden. Then, on both lines, the service was replaced by buses operated by the New Zealand Railways Road Services.

That was not the end of the Flyers. The timetables retained a 'runs as required' Kingston Flyer, which typically operated at peak holiday periods between Gore and sometimes Dunedin to Kingston. For many years, those expresses and excursions operated in conjunction with steamers on Lake Wakatipu, to provide the primary access to Queenstown. Patronage was initially heavy, but it declined through the 1950s. 1956 was the last year when Flyers ran each way in the same day, and the final Flyer operated during the 1957 Easter holiday period.

In 1971, New Zealand Railways announced that it was going to recommence operating a service named the Kingston Flyer as a heritage service. The last use of steam on a regularly scheduled revenue service in New Zealand was on 26 October 1971, and the new Kingston Flyer began operating two months later on 21 December. It utilised the section of the Kingston Branch between Lumsden and Kingston and proved wildly popular. From 1971 until 1979 it operated every summer through to the Easter holiday period and carried over 30,000 people annually. Flooding damage to the line between Lumsden and Garston meant that the last Kingston to Invercargill flyer ran on 17 April 1979 and the damaged section of track in question was formally closed in November of that year. For the next three years, the Kingston Flyer operated from Invercargill to Bluff and Wairio, albeit less successfully.

In 1982, the Kingston Flyer was returned by NZR to Kingston before the remaining line now part of the Mossburn Branch was closed and removed. The initial intention was to utilise the remaining 20 kilometres of track between Garston and Kingston, but the decision was made to end the line in Fairlight and the additional six kilometres to Garston were closed. Although the original Flyers had typically been operated by locomotives of the Rogers K and V classes, two AB class 4-6-2 locomotives, AB 778 and AB 795 were restored specifically for the Kingston Flyer.

In 1992, NZR's successor, New Zealand Rail Limited (Tranz Rail from 1995), acquired Kingston Flyer Limited, which was sold again in 2003 by Toll NZ, then owners of Tranz Rail, to a private operator.

In November 2008 the operation was offered for sale at $3 million as a going concern. In late August 2009 it was announced that the train would not operate again in the foreseeable future as mounting debt had forced the operation to close. Kingston Acquisitions tried to sell the train in November 2008 to repay about $4.7 million to Christchurch-based finance company Prudential.

Prudential blocked an initial offer by United States-based company Railmark to buy the operation for $2.25m, the insurers refusing to accept anything less than the whole debt being cleared. Invercargill-based enthusiast Karl Barkley formed the Kingston Flyer Steam Train Trust to preserve the Flyer under the auspices of a charitable trust but was unable to raise the necessary funds to purchase the Flyer from Prudential.

In November 2009, the Flyer's owners were put into receivership and the train itself put up for sale.

In 2011 business was listed on the internet auction site TradeMe for sale with a price of NZD$2.5 million. That included the locomotives, all land associated with the railway, including the Kingston and Fairlight stations, and parts of the Kingston wharf, and several other development sites in Kingston which were not related to the railway. The business was purchased in August 2011 by businessman David Bryce who put it back in operation on 29 October 2011.

In December 2012 the Kingston Flyer was again suspended, due to the discovery of leaks in AB 778's boiler and owner David Bryce's ongoing health problems. The train resumed operation once the extensive overhaul of AB 795 was finished, and the business was once again put up for sale. As at December 2013 no offers had been accepted and the operation remained mothballed, the owner suggested that the Kingston Flyer could be put into a trust.

On 23 February 2017 it was announced that the Kingston Flyer and all associated land and buildings had been sold to a local consortium. Within two months it became apparent that the buyers were interested only in the land that the train runs on. Development West Coast said it was interested in buying the infrastructure and running the train on the West Coast railway network.

On 22 December 2017, it was announced that the train would remain in Kingston, and it was hoped that one AB class locomotive would be operational by February 2018.

At the start of 2020, it was reported that the train would be back in service at some time during the year. In May 2020 the new owners stated that their intention to restore the service by Summer 2020. In January 2021 the company applied for an operating consent to run trains again, but stated that it had no timeframe for when that might happen. In April 2021 the Kingston Flyer ran trains as part of Great Southern Train Tour.

The Kingston Flyer has been operated since 1971 by two AB class steam locomotives:

From 2000 until 2003, K 92, a preserved member of the Rogers K class that headed the original Flyers, was based in Kingston and operated services both by itself and together with the AB engines. The locomotive was owned by the Waimea Plains Railway Trust and returned briefly during 2008-09 until the bankruptcy when it was recovered by the WPRT and moved to their base at Mandeville on the old Waimea Plains Railway in November that year and where it remains to date.

The Flyer also has a resident shunting locomotive, TR 350, a 15-tonne 0-4-0 diesel-hydraulic shunting locomotive built by A & G Price of Thames. This duty had been filled since the 1990s by 0-6-0DM DSA 551, which was recalled by Tranz Rail in 1999 and replaced by the smaller TR. The TR was used to shunt at Kingston and provide motive power for work trains during the winter shutdown. It remains there with the other locomotives and rolling stock in the compound.

Initially, the Flyer started out with seven wooden-bodied passenger carriages:

An eighth carriage was added by Tranz Rail in 1999. 56-foot steel-panelled passenger carriage A 1958 (TMS A 56595), a former mainline passenger carriage, was transferred from the Tranz Scenic carriage pool to the Kingston Flyer to bolster capacity. That was the only new rolling stock to have been added to the fleet since 1971 when the heritage Flyer began running. It is the most modern carriage in the fleet, although it is out of place with the other carriages.

This carriage was sold separately in 2015, and now can be seen on Huntingdon Street, where the new owners have placed it on a property just down from the railway line.

The Flyer also has a small collection of goods wagons, including three ballast wagons and an EP class plough van. The majority of the goods stock is used for Way and Works purposes, although there are three flat wagons used around the Kingston locomotive depot for maintenance purposes, primarily to hold locomotive parts.

All content from Kiddle encyclopedia articles (including the article images and facts) can be freely used under Attribution-ShareAlike license, unless stated otherwise. Cite this article:
Kingston Flyer Facts for Kids. Kiddle Encyclopedia.